RECAP: Luka Garza, Iowa too much for 15th-seeded Grand Canyon 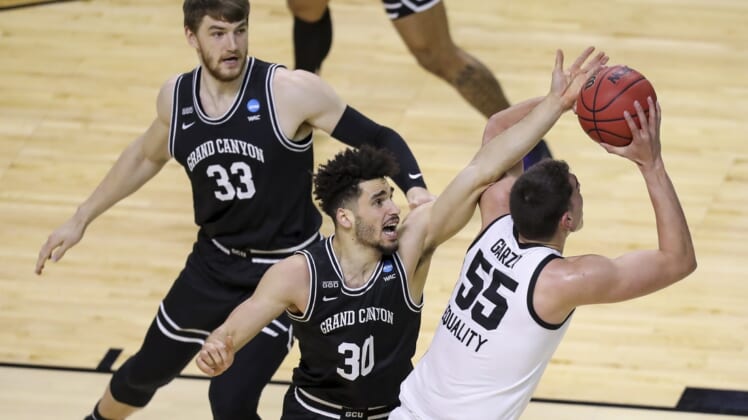 Try as they might with history already not on their side, the Grand Canyon Antelopes couldn’t stop Luka Garza and the Iowa Hawkeyes on Saturday in a first-round game of the NCAA Tournament in Indianapolis.

Garza, the Big Ten player of the year and a candidate for national player of the year, scored 24 points. The Hawkeyes, the No. 2 seed in the West Region, advanced to a second-round game against seventh-seeded Oregon on Monday.

The Ducks moved on after the NCAA ruled their game with VCU, scheduled for later on Saturday night, a no contest due to COVID-19 protocols within the Rams’ program.

The Antelopes (17-7) were led by center Asbjorn Midtgaard’s 18 points with 15 from Jovan Blacksher Jr. Grand Canyon, the Western Athletic Conference co-regular season and tournament champion, bowed out in its first-ever NCAA Tournament appearance.

A 3-pointer from Wieskamp with 1:41 to play in the first half gave the Hawkeyes a 40-29 lead. Iowa took a 42-31 lead into halftime, the 11-point advantage the largest lead of the half for Iowa.

Jordan Bohannon hit a 3 with 16:29 to play, giving the Hawkeyes a 56-39 lead. Grand Canyon couldn’t get the deficit under double digits throughout the second half.

A 3-pointer from Oscar Frayer with 34 seconds to play made the score 84-74, but that was the closet the Antelopes could get to the Hawkeyes in the second half.

Grand Canyon head coach Bryce Drew emptied his bench with 22.2 seconds to let reserves get a taste of March Madness play. A No. 15 seed has beaten a No. 2 seed just nine times in NCAA Tournament history, including Oral Roberts’ upset of Ohio State on Friday.