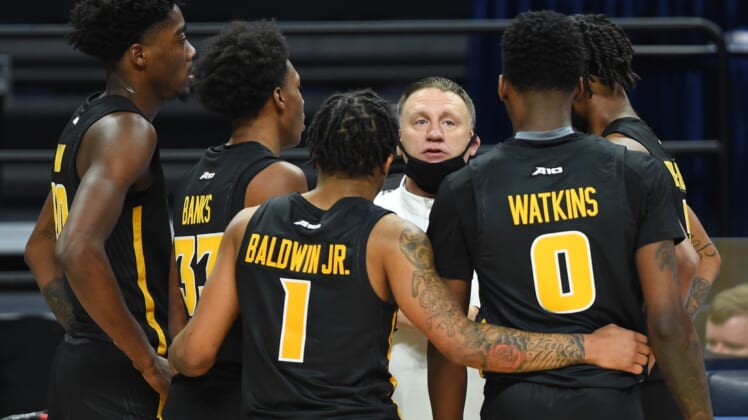 The NCAA Tournament West region, first-round matchup between No. 10 seed Virginia Commonwealth and No. 7 Oregon was declared a no contest on Saturday due to multiple positive COVID-19 tests within the Rams’ program.

The Ducks (20-6) automatically advance to the second round and face the winner of Saturday’s matchup between No. 2 seed Iowa and No. 15 Grand Canyon on Monday.

“The NCAA Division I Men’s Basketball Committee has declared the VCU-Oregon game scheduled for Saturday night at Indiana Farmers Coliseum a no-contest because of COVID-19 protocols,” said the NCAA in a statement. “This decision was made in consultation with the Marion County Public Health Department.

“As a result, Oregon will advance to the next round of the tournament. The NCAA and the committee regret that VCU’s student-athletes and coaching staff will not be able to play in a tournament in which they earned the right to participate. Because of privacy issues we cannot provide further details.”

VCU needed just five “eligible and healthy” players in order compete, as outlined by NCAA senior vice president of basketball Dan Gavitt prior to the start of the NCAA Tournament. The event’s contact tracing and other COVID-19 protocols were expected to prevent a team from withdrawing due to one or two positive tests.

“We’ve been tested every day for the past three weeks, but within the past 48 hours we’ve received multiple positive tests,” confirmed VCU coach Mike Rhoades in a statement. “We are devastated for our players and coaches. It has been a dream for all of us to play in the NCAA Tournament.”

Said Atlantic 10 commissioner Bernadette V. McGlade said in a statement: “This is tremendously disappointing and heartbreaking for the student-athletes who’ve worked so hard for this opportunity. During this pandemic, the medical advisory boards have the authority to make this decision for the safety and welfare all of the student-athletes, staff and teams.

“VCU has had an outstanding year, and this setback does not diminish any of their accomplishments.”

VCU vice president and director of athletics Ed McLaughlin also released a statement: “With the utmost disappointment, our men’s basketball program will head home from the NCAA Tournament. We are heartbroken for our student-athletes, coaches, campus community and fans. Our team earned the opportunity to play in the NCAA Tournament. The members of our program did an excellent job following COVID-19 protocols all year, including since we arrived in Indianapolis, so ending our season in this manner hurts even more.”

VCU, which has made 18 NCAA Tournament appearances, has not advanced in its past three appearances.

Oregon coach Dana Altman wasn’t expecting to advance in the tournament in this fashion.

“During these challenging times, health and safety is the highest priority,” Altman said. “We would like to wish the VCU student-athletes and staff all the best, and congratulate them on an outstanding season. We hate to see a team’s season end this way after all the hard work the student-athletes have put in. This isn’t the way we wanted to advance, but we are excited to be moving on and we will start our preparation for Monday’s game.”

This is the first NCAA Tournament game canceled or declared a no-contest due to COVID-19 issues.