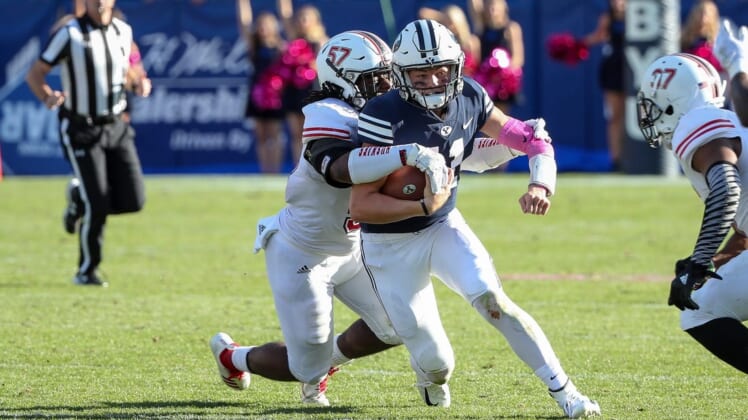 As college football season approaches, Northern Illinois features one of the most unique players in the country in linebacker Kyle Pugh.

Pugh is an eighth-year senior and nearly 25 1/2 years old, a stunning combo. He has played in 34 games in a career ravaged by injuries.

His 2017 campaign ended after four games due to a ruptured bicep tendon. In 2019, his season ended after two games because of a shoulder injury. Last season, he tore the ACL in his knee during spring practice and missed the entire season.

He redshirted his first year on campus in 2015, received medical redshirts in 2017 and 2021, and every college player received an extra season of eligibility in 2020 due to the COVID-19 pandemic.

So it hasn’t been an easy road for the native of Chicago Heights, Ill.

“It definitely takes time to process each injury and know the battle back will be different each time,” Pugh recently told Hustle Belt. “I have to allow myself to feel what’s going on and have the self dialogue to understand that it is what it is, it happens, and I can either quit or get up and battle back. I still haven’t come to an injury that I can’t come back from.”

Pugh has been a solid player for the Huskies when healthy, but now he is also a strong leader.

There isn’t a situation that can arise that Pugh hasn’t seen.

“When you have someone like Kyle Pugh who’s been here for as long as he has, when he speaks the young men listen,” linebackers coach Robert Wimberly said. “They respect him and the way he carries himself. He’s been working hard and running well, and our goal is to get him to the first game and allow him to be able to enjoy his last go-round.”

Pugh was a second-team All-Mid-American Conference choice in 2018 when he had a career-best 106 tackles. He was a third-team selection during the shortened 2020 season when he had 36 stops. And in 2017, he recorded a career-high 17 tackles and collected the only interception of his career in a loss to Boston College.

The Huskies open the season on Sept. 1 against Eastern Illinois. Pugh enters the game with 186 career tackles, including 12.5 for losses. He also has three sacks and three fumble recoveries.