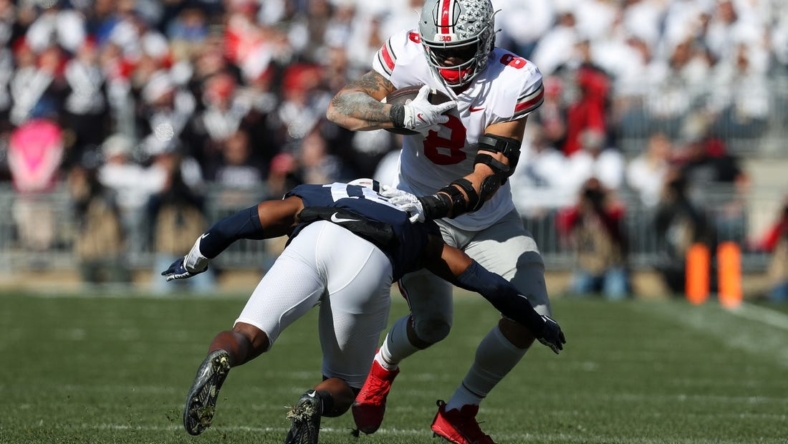 No. 2 Ohio State racked up 28 points in the fourth quarter, including two touchdown runs by TreVeyon Henderson, to defeat No. 13 Penn State 44-31 in State College, Pa., on Saturday afternoon.

On Penn State’s next series, J.T. Tuimoloau sacked and stripped Sean Clifford at the Nittany Lions’ 24. C.J. Stroud threw a 24-yard TD to Cade Stover on the next snap to make it 30-21 before Penn State responded with a 44-yaard field goal by Jake Pinegar to get within 30-24.

Henderson ran for a 7-yard score and Tuimoloau intercepted Clifford and returned it 14 yards to make it 44-24 with 2:42 to play, giving the Buckeyes four touchdowns in a 6:09 span.

The Nittany Lions got a 5-yard TD catch from Allen with 1:12 left.

Tuimoloau finished with a fumble recovery, two interceptions, a sack and tipped ball that led to an interception.

Clifford was 32 for 47 for 371 yards, three touchdowns and three interceptions while Parker Washington had 11 catches for 179 yards and a score.

Penn State led 14-13 at the half despite a horrible start for Clifford, who threw interceptions on his first two possessions. The Buckeyes converted the turnovers into a 10-0 lead on a 38-yard field goal by Noah Ruggles and 4-yard run by Miyan Williams.

The Nittany Lions responded with 58-yard touchdown catch by Washington early in the second quarter. Penn State took a 14-10 lead at 6:50 on a 23-yard reception by KeAndre Lambert-Smith.