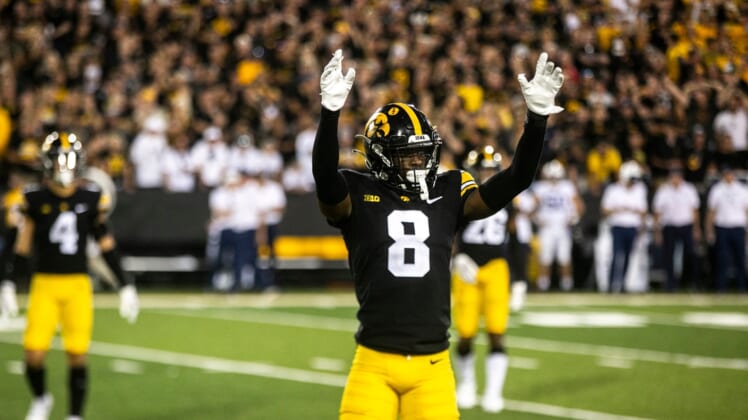 This season is looking like it might be a special one for Iowa, but a home loss to Purdue this week would throw a wrench into those plans.

The second-ranked Hawkeyes welcome the Boilermakers to Iowa City on Saturday for a Big Ten contest.

Iowa (6-0, 3-0 Big Ten) already has defeated three ranked opponents — No. 17 Indiana, No. 9 Iowa State and No. 4 Penn State. Last Saturday the Hawkeyes rallied past the Nittany Lions 23-20 as Spencer Petras found Nico Ragaini with a 44-yard touchdown pass with 6:26 remaining.

“We know we have something special here,” Ragaini said after the top-five showdown.

Iowa has won 12 games in a row and has captured nine straight contests against Big Ten opponents. The offense generally has been solid, with at least 23 points in every game this season, but the Hawkeyes’ undefeated start has truly been fueled by the defense.

Kirk Ferentz’s team ranks fourth in the nation — and first in the Big Ten — in scoring defense, allowing just 13 points per game. The turnover story has been particularly impressive, as Iowa leads the nation in turnovers forced (20), interceptions (16) and turnover margin (+15).

Nine Iowa players have intercepted at least one pass.

“They’re going to have their eyes strapped on the quarterback, break on the ball and make plays,” Purdue coach Jeff Brohm said. “They’ve done that against every single opponent they’ve had. We have to figure out a way to not allow that to happen but yet still be aggressive.”

Cornerback Riley Moss leads Iowa with four picks, but he sustained a knee injury last week and was not listed on this week’s depth chart Monday.

Purdue (3-2, 1-1) has scored just 13 points in each of its past three games. Two of those contests were losses, including last week’s 20-13 home defeat to Minnesota.

The Boilermakers outgained the Golden Gophers 448-294 but were doomed by mistakes — allowing four sacks and committing two turnovers in the red zone.

Aidan O’Connell started at quarterback in place of the inconsistent Jack Plummer and went 33 of 51 for 357 yards with a touchdown and an interception. David Bell (six catches for 120 yards) topped 2,000 yards receiving for his career and certainly will be a focus of the Hawkeyes’ defensive game plan.

“Every week, the goals are really simple — to try to come out ahead on the score at the end of the week and then also to improve,” Ferentz said. “And playing a game like that (against Penn State), where it was tough, it was really gritty, that’s going to be a good thing for us. I think that will serve us well down the road.”

The last time Purdue faced the nation’s No. 2 team, on Oct. 20, 2018, the Boilermakers scored a resounding 49-20 victory over Ohio State in West Lafayette, Ind.

In their all-time series against Iowa, the Boilermakers hold a 49-39-2 advantage, including three wins in the previous four games.