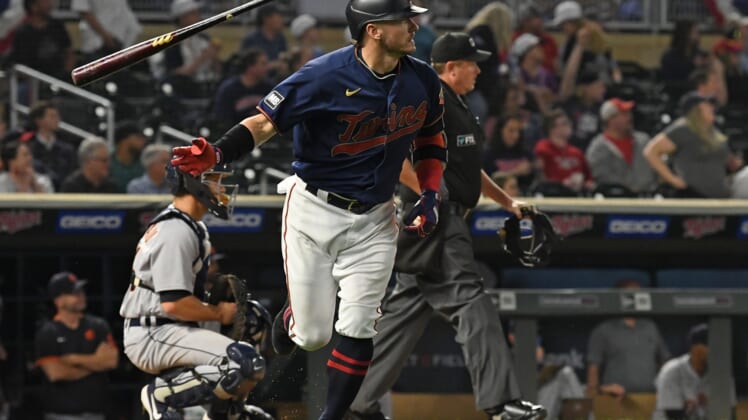 Niko Goodrum hit two home runs and drove in four runs as the Detroit Tigers snapped a four-game losing streak with a 10-7 victory over the Minnesota Twins on Thursday night in Minneapolis.

Jonathan Schoop went 3-for-4 with a homer, three runs and two RBIs and Harold Castro had two doubles and two RBIs for Detroit (76-83).

Alex Lange (1-3) picked up his first major league victory with 1 1/3 innings of hitless relief. Michael Fullmer, despite allowing two runners in the bottom of the ninth, picked up his 13th save.

Byron Buxton hit two homers and also doubled and Josh Donaldson and Brent Rooker also homered for Minnesota (71-88) in its final home game of the season.

In the bottom of the first, Buxton led off with a 426-foot drive into the second deck of left field to give the Twins a 1-0 lead.

Goodrum tied it leading off the third with his eighth, a 411-foot drive to right off Twins starter Joe Ryan. Minnesota regained the lead, 4-1, in the bottom half of the inning on a three-run homer by Donaldson, his 25th of the season and the 250th of his career.

Detroit answered with four runs in the fourth to take a 5-4 lead, highlighted by an RBI double from Harold Castro followed by a 432-foot three-run homer from Goodrum, who produced the third multi-homer game of his career.

Rooker tied it with his ninth home run of the season in the bottom of the fourth, but Schoop answered with a two-out RBI single in the fifth to put the Tigers back in front, 6-5.

The Twins tied it in the sixth on a two-out RBI single by Luis Arraez and then took a 7-6 lead in the seventh on Buxton’s 427-foot leadoff homer into the bullpen in left-center.

Detroit took advantage of the wildness of reliever Ralph Garza Jr. (1-4) to take a 9-7 lead in the eighth. Garza issued back-to-back walks to Schoop and Jeimer Candelario to start the inning, and Harold Castro followed with an RBI double. Candelario scored the go-ahead run one out later on a sacrifice fly by Dustin Garneau, and Willie Castro followed with an RBI single.

The Tigers added an insurance run in the ninth when Schoop lined his 22nd homer of the year into the left field bleachers off reliever Kyle Barraclough.