10 NFL veterans who could be cut during training camp

Competition is the life blood of the NFL. As every team prepares for training camp later in July, there are some veterans you’ll likely recognize who could be on their way out in favor of younger, or just better, replacements.

In some cases, it’s just age at work. Father Time comes for us all, and he will come for a few aging stars. Other players simply never lived up to expectations and are on their last legs.

These 10 NFL veterans are all in danger of losing their jobs this summer when training camp convenes.

It’s pretty telling that the Packers made a trade for DeShone Kizer this offseason. That move signaled in no small way that Hundley’s job security wasn’t in great shape, and so did Mike McCarthy’s comments about Kizer.

Sure, Hundley started nine games last year while Aaron Rodgers was out with a broken collarbone. But when he played, the former UCLA quarterback struggled mightily. His limitations were plain for all to see as the Packers went 3-6 while Hundley completed just over 60 percent of his passes with nine touchdowns and 12 interceptions.

He sure didn’t look like the heir apparent to Rodgers. Now the Packers are getting busy looking for someone who is.

Te’o stepped up last year for New Orleans when A.J. Klein was lost for the season with a groin injury. He appeared in all 16 games and earned 11 starts.

However, as we’ve seen since the former Notre Dame star entered the NFL in 2013, Te’o just isn’t a big-time playmaker. He is limited athletically, and it wasn’t surprising to see the Saints continue to upgrade their linebackers by signing veteran Demario Davis.

Because Te’o isn’t a contributor on special teams, he will likely be the odd man out this summer when the Saints make their cuts as Klein returns to form and Alex Anzelone — a player with more upside than Te’o — continues to prove his worth on punt and kickoff returns. 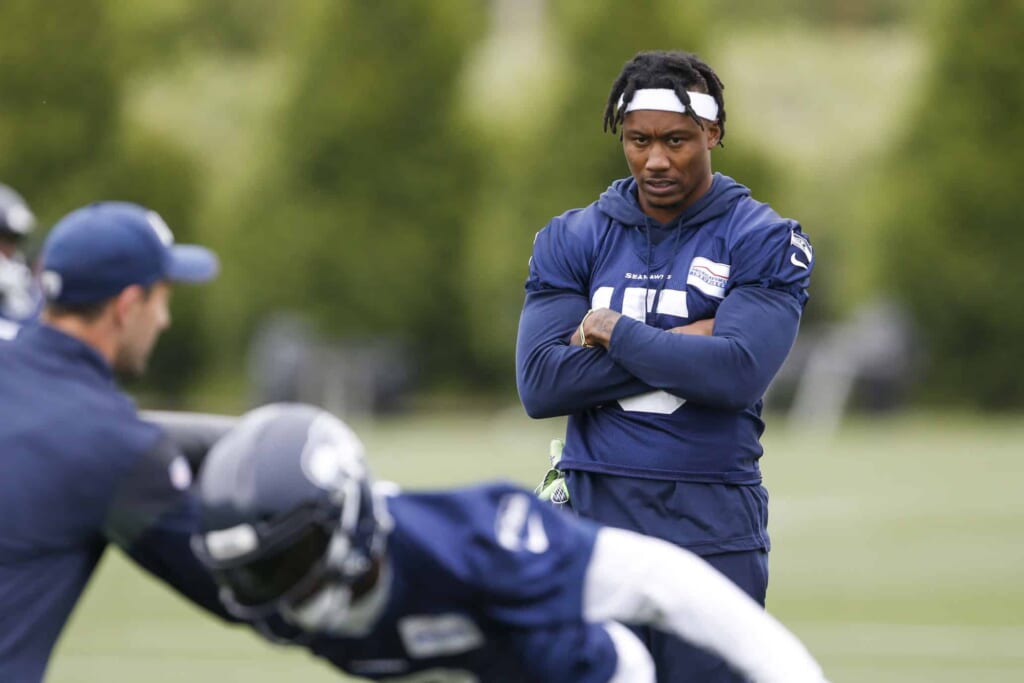 It was pretty big news when the Seahawks signed Marshall in free agency. After all, he’s one of the rare current players who is on the cusp of eclipsing 1,000 career catches, and he’s been a brilliant touchdown maker in years past.

However, all we have to do to understand just how tenuous Marshall’s roster spot is in Seattle is glimpse his guaranteed money on this deal. Out of the $1.1 million deal, just $90,000 is guaranteed. That’s about as low-risk as it gets for such a tenured veteran. On top of that, Marshall has already missed time due to injury this offseason.

It might be time to temper any remaining expectations Marshall, and his fans, have about what he has left in the tank.

When the Patriots made a play for Gillislee last year, essentially stealing him from the Buffalo Bills, it was thought by most of us who cover the league that he’d become a force in New England’s offense.

Yet, that did not happen. Gillislee ended up playing in just nine games. He was a healthy scratch a few times and then suffered a knee injury after finally getting into some action in Week 16. In the end, he touched the ball just 105 times for 398 yards and five touchdowns.

With Sony Michel looking to be a key cog going forward, and given the way Gillislee has fallen out of favor in New England, he could be on the outside looking in this summer.

The Bills had some high hopes for Lawson back when they selected him No. 19 overall in 2016. However, a shoulder injury kept him from achieving much as a rookie in 2016, and then he was only minimally effective before an ankle injury forced him to injured reserve last year.

Lawson is reportedly going to be fighting for his roster spot this summer. The Bills are completely different now than they were under Rex Ryan when Lawson was drafted. Not only is the defense completely different, but he now has to compete with Trent Murphy, who was acquired in free agency, along with Jerry Hughes, Terrence Fede and Owa Odighizuwa. And he’s running out of time to impress. 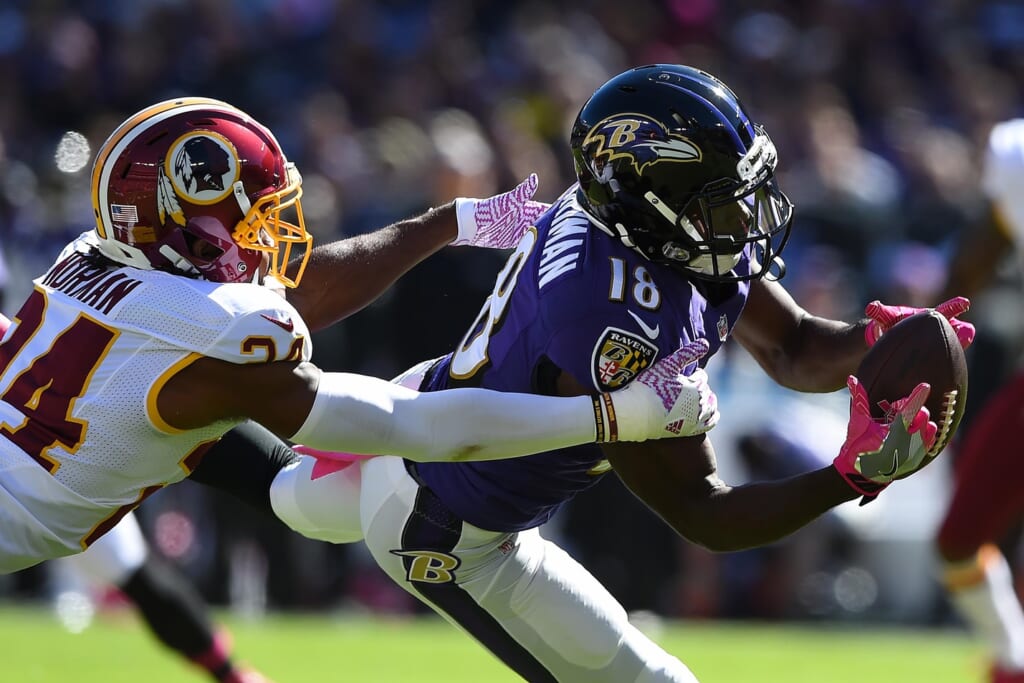 Speaking of running out of time, Perriman is “this close” to being dubbed a first-round bust. After missing his entire rookie campaign due to injury, the former 26th overall pick of the 2015 NFL Draft has since appeared in 27 games. That’s the good.

Now comes the bad: in those 27 games, Perriman has caught just 43 passes for 576 yards and three touchdowns.

Baltimore has overhauled its receiving corps in a big way this offseason. If Perriman doesn’t show some real evidence he’s ready to become a notable contributor, he’s going to be out of work.

Back in 2012, Johnson appeared to stake his claim as one of the league’s rising stars on the edge. That season, he racked up 11.5 sacks and carved out a role as a starter for the Bengals.

Ever since then, however, the former Georgia Tech star has failed to sniff that kind of production. He’s clung to his starting role but just hasn’t been able to get consistent pressure on opposing quarterbacks.

Now Cincinnati enters camp with one of the more stacked units of edge rushers in the NFL. Johnson will be competing with rookie Sam Hubbard, Carl Lawson, Jordan Willis and, of course, Carlos Dunlap, for snaps this summer. Good luck. 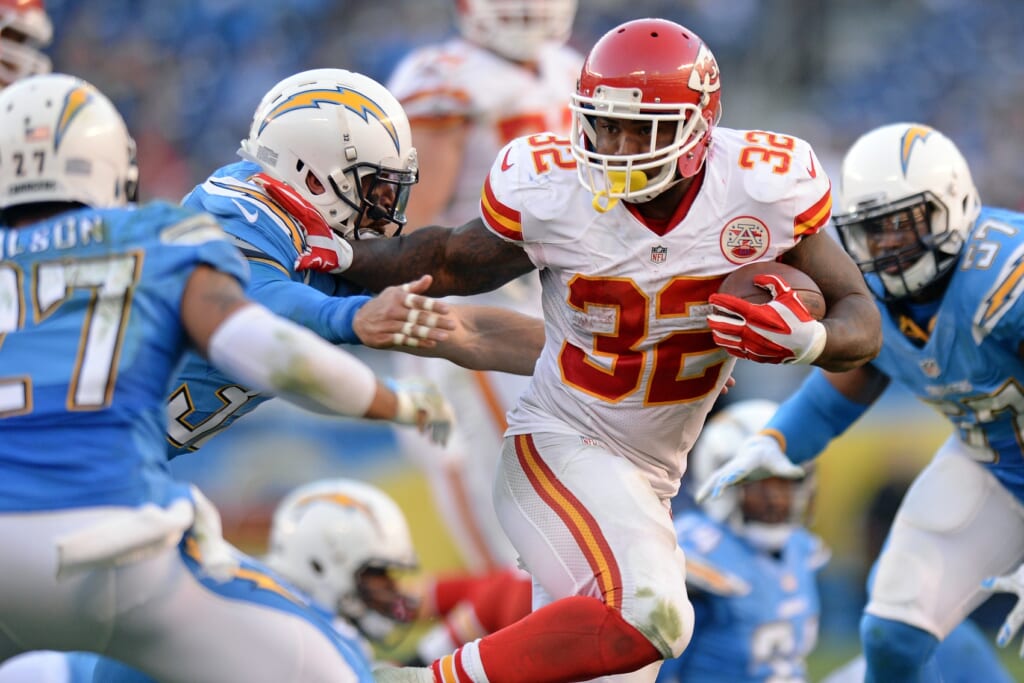 Before suffering what ended up being a season-ending knee injury, Ware was expected to take over for Jamaal Charles as the bell-cow running back for the Chiefs in 2017. In the end, we all know that it was rookie Kareem Hunt who came out of nowhere to not only adequately replace Charles but also to lead the NFL in rushing.

Fast forward nearly a full year and Ware is looking pretty amazing doing individual drills. But he has yet to do team drills this offseason, and back in April head coach Andy Reid was tepid in his response to questions about when Ware might be back to full healthy.

The running back position is one that leads to swift declines. Ware might be just fine and prove to be the obvious No. 2 behind Hunt this year. That said, nobody should be surprised if he ends up being released at some point, either.

Simon will likely fall victim to being in the wrong place at the wrong time this summer. The Colts switched from a 3-4 scheme to a 4-3 under new defensive coordinator Matt Eberflus. Simon, who excelled at outside linebacker last year until he was injured, will now be competing on the edge at defensive end this summer.

For those who are not in the know, Simon is not built like a defensive end. He’s just 6-foot-1, 250 pounds and hasn’t tried playing with his hand in the dirt since his college days at Ohio State, according to Mike Wells of ESPN. With that being said, even on a team that needs all the help it can get on the edge, we’ll be shocked if Simon ends up standing the test of time and makes it on the final roster.

Denver’s desperation move to bring Watson in last year in the hopes he’d help shore up a mediocre offensive line ended up backfiring.

When he played, Watson was awful, earning an abysmal 38.9 grade from Pro Football Focus. And, not surprisingly, Watson missed nine games due to injury. This former Oakland Raiders lineman just hasn’t been able to stay healthy, missing games in each of his first five NFL seasons.

Now that Jared Veldheer is penciled in as the starting right tackle, Watson will likely be released in favor of Denver’s younger, more promising players like Cyrus Kouandjio or Billy Turner.