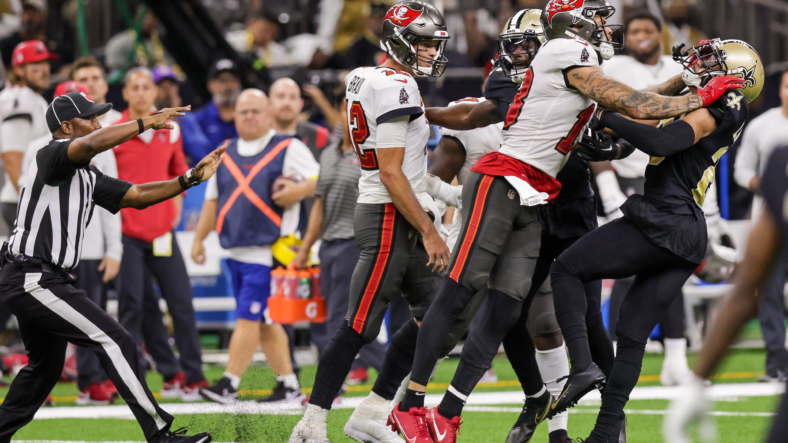 We had some idea there would be further punishment coming for Tampa Bay Buccaneers wide receiver Mike Evans after his involvement in the brawl that broke out late in his matchup against the New Orleans Saints on Sunday.

With the NFL announcing its intentions to conduct a full review as they look into the fight, how it started, and just who was at fault for the fracas, we now have a ruling.

Evans, a four-time Pro Bowl player, and the team’s current leading receiver, has been suspended for one game without pay for unnecessary roughness and unsportsmanlike conduct violations. This means Evans is set to miss the Week 3 battle with the Green Bay Packers.

Specifically, Evans pushed Saints cornerback Marshon Lattimore strongly enough to cause him to fall over. The two have had their battles in the past, so it’s possible this latest infraction didn’t help when considering whether further punishment was deserved after he was ejected from Sunday’s game.

Evans does have the option to appeal the ruling, which would then be heard by either Derrick Brooks or James Thrash, both former NFL players.

If Evans does try to appeal, thanks to his previous history with Lattimore, it’s expected the attempt would fall on deaf ears. Yet, according to ESPN’s Jeremy Fowler, Evans will be appealing the suspension.

Unless his appeal is successful, Evans will be eligible to return for Tampa Bay’s Week 4 Sunday Night Football matchup against the Kansas City Chiefs.

For now, the league has announced a one-game suspension for Mike Evans, but we may hear of more infractions being handed out later this week, according to NFL Network’s Tom Pelissero. For now, Evans loses just over $60,000, or the equivalent of one game check for his salary, and will have to miss next week’s game. We’ll see if Marshon Lattimore or anyone else is fined later this week.

Clearly, Evans didn’t feel what he did was wrong. The league office felt otherwise.