Contract stalemates are never fun. And boy, do we have some doozies on this front right now with NFL stars as training camps loom in the not-so-distant future.

Multiple stars held out of mandatory minicamps this offseason as they made their case to get paid. Those who did should absolutely be willing to go the distance here and hold out through camp.

There are a few other players we’re going to focus on here that did show up to minicamps. But looking forward, they should consider holding out as well this summer to land the contracts they deserve.

These 10 superstars all are in a unique position to leverage their value in order to land lucrative long-term deals.

Johnson’s minicamp holdout came out of nowhere, but in no way is it a shocking development. After all, because he was a third-round pick in 2015, he landed a four-year rookie deal worth just over $2.9 million with less than $640,000 guaranteed.

Despite the fact that he missed almost all of last season with a wrist injury, Johnson’s value hasn’t diminished. In fact, it could be argued that he has more value due to having one less year of wear and tear on his body.

When healthy, Johnson is among the best at his position. He led the league with 2,118 yards and 20 touchdowns from scrimmage in 2016 and had 33 total touchdowns his first two seasons in the league. 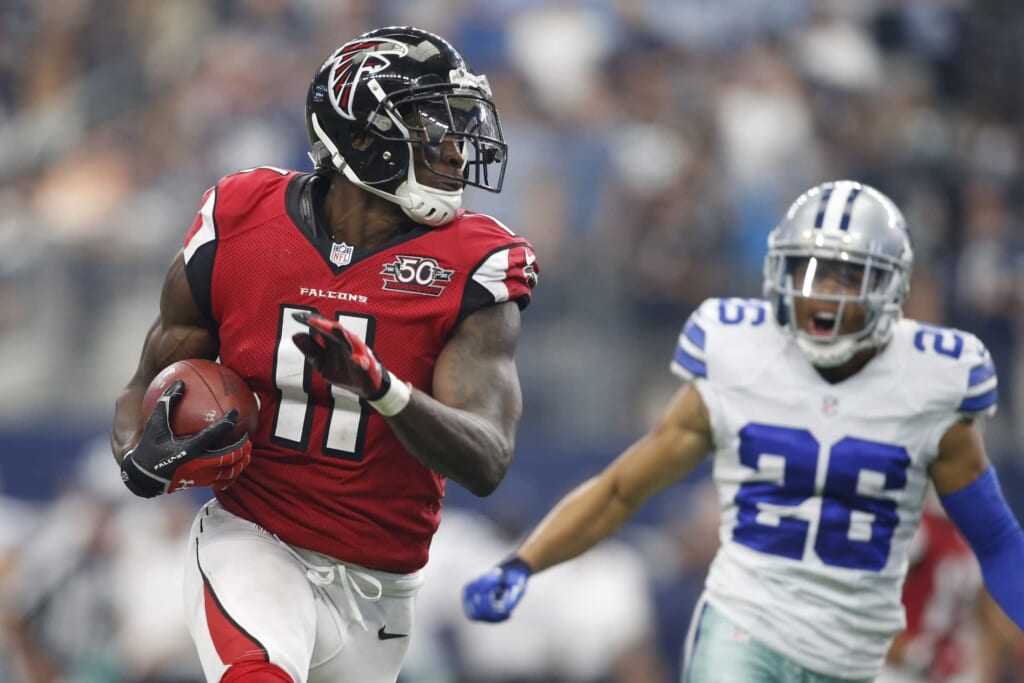 Of all the players on this list, Jones has the least leverage. He still has three years left on his current deal, which at the time of signing was a smoking deal. That said, the final three years of this deal average out to just $11.5 million, which is very low in today’s market for an elite receiver.

And make no mistake about it, Jones is elite. He’s averaged over 102 catches for 1,579 yards and nearly six touchdowns per season the past four years.

Jones threw down the gauntlet to the Falcons recently by holding out of mandatory minicamp. The team continues to say there’s no reason to worry and that both sides want what’s best, which is to lock Jones up long term on a new deal. But given the way Jones has been distancing himself from the Falcons in strange ways this offseason, it’s clear not everything is hunky dory between these two parties.

Like David Johnson, Lewan’s minicamp holdout was a surprise because there was no hint it was going to happen before it did. That said, Lewan is making the right move here, because he definitely deserves a contract extension ahead of the 2018 season.

One of the game’s elite left tackles, Lewan enters the final year of his rookie deal after the Titans picked up his fifth-year option. If no new deal is struck, then he’ll haul in $9.3 million, which isn’t chump change but also is nowhere near what Nate Solder landed on his big free-agency deal with the New York Giants.

Lewan is a better player than Solder is, and he’d be justified in thinking he deserves more than Solder got. The Titans have plenty of cap space and should be working overtime to rectify this situation before camp. 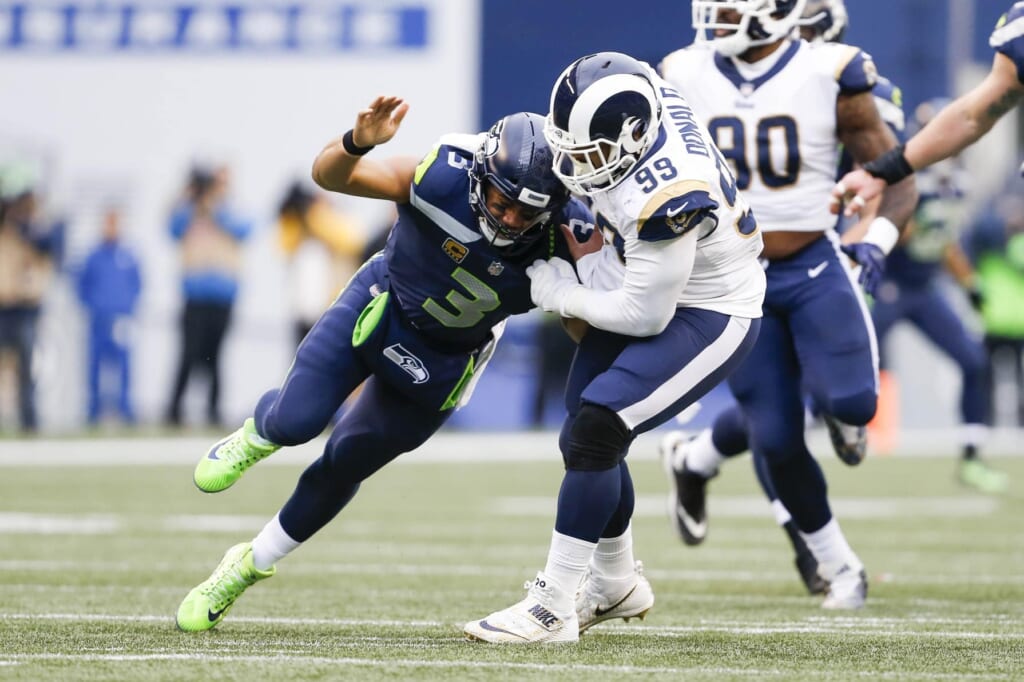 Donald wanted a new contract before last season and held out in an attempt to get it. In the end, the Rams didn’t budge, and Donald missed the first two games of the season after holding out the entire preseason slate.

As we know, that holdout did absolutely nothing to slow this man down. He not only put up insane stats — 41 tackles, 11 sacks and five forced fumbles — but Donald also won Defensive Player of the Year.

Donald has been staying away from the Rams throughout the offseason. He likely won’t be showing up to training camp without a new contract for the second consecutive year, which is absolutely the right move. Set to earn just $6.89 million in 2018 on his current deal, Donald is in a position to make history with the richest contract a defensive player has ever seen.

Based on his own words, there’s no “should” here. If the Steelers don’t provide Bell with the long-term deal he seeks (reported demands here), then he will not show up for training camp and won’t report until after the preseason is concluded.

Making this even more of a sticky situation, it’s been reported that Bell and the Steelers haven’t even had a single discussion about a new deal since before the 2018 NFL Draft. There isn’t much more time left to get a long-term deal done before Bell has to play on the $14.5 million franchise tag.

It’s looking more and more likely that Bell will become a free agent after the 2018 season, which would lead to plenty of drama next offseason. 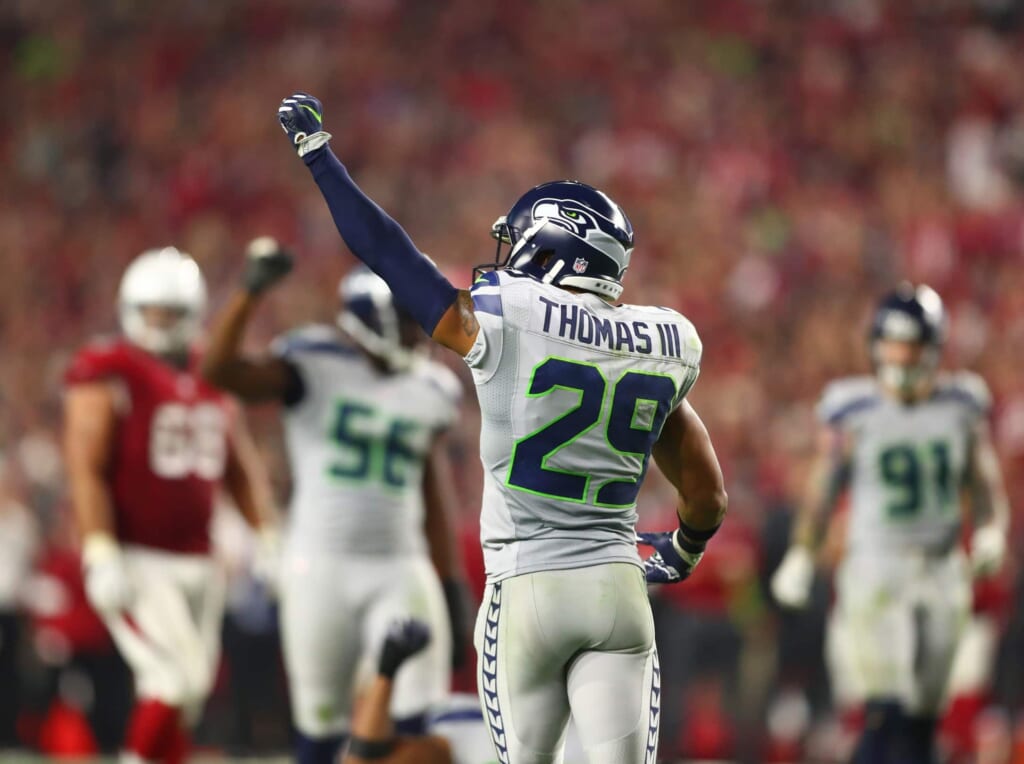 With just one year left on his current contract, Thomas, at the age of 29, is definitely starting to think about life after football. We knew this was the case when, after his devastating broken leg in 2016, he openly pondered retirement.

Therefore it wasn’t surprising when he made it crystal clear in a social media post that he will not be showing up to any team-related activities until he has a new contract.

The Seahawks are in a position where they are clearly rebuilding the defense. Thomas is set to earn $8.5 million in base salary this season, if he plays out his contract. But aside from his signing bonus, Thomas has no guarantees left on his deal, which is a huge reason why he’s holding out. Don’t be surprised if this situation ends up lasting beyond the preseason and leaks into the 2018 regular season.

The Giants have put their foot down in no small way as it pertains to Beckham and any talk of a new long-term deal. He hasn’t done himself any favors off the field, or on it, for that matter, with many indiscretions on record.

With that in mind, it might seem like Beckham should just play it safe and do everything the Giants want him to do.

We’re veering in the opposite direction here. The Giants need Beckham more than he needs them. They are pushing all their chips into the pot to try and win another championship before Eli Manning is done. Without Beckham in the lineup, however, the New York offense isn’t nearly as explosive, which really hurts the entire team.

Beckham needs to capitalize on this situation. If it takes a summer holdout, then so be it. He deserves to get paid.

The Packers and Rodgers have been publicly very upbeat about getting a new deal done this summer. And nobody will deny that an extension is necessary, given the fact that Rodgers is set to count for just over $20 million against the cap. Given the huge deals lesser quarterbacks have landed, this is a gimme.

But let’s ponder a circumstance in which the Packers don’t extend Rodgers before training camp. He has absolutely zero guaranteed money left on his contract. That’s not ideal. Now, imagine a scenario in which Rodgers gets injured in camp, without having any guarantees left on his deal. That’s obscene.

We’ll cross our fingers that the Packers do the right thing and extend Rodgers — making him the richest player in NFL history in the process — before this becomes an issue. But if that doesn’t happen, Rodgers should hold out. 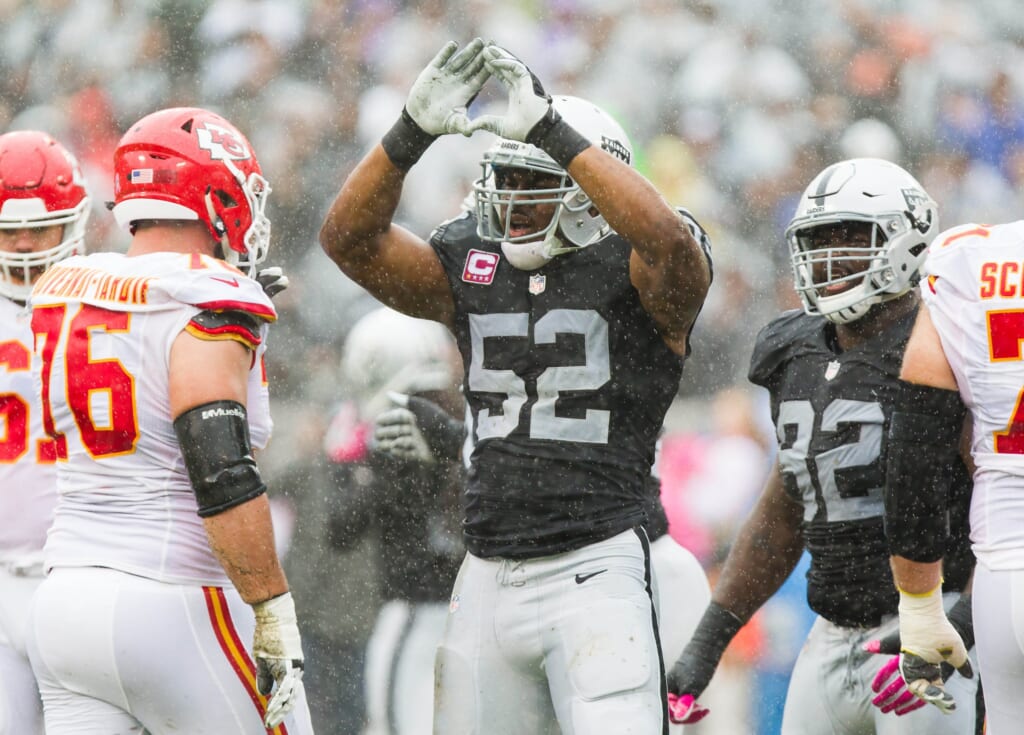 The Raiders have been talking about extending Mack’s contract since last year. Obviously, that hasn’t yet occurred. Mack has gotten serious about doing his part to remedy this situation. The elite pass rusher held out of OTAs and minicamp, earning the scorn of his new defensive coordinator in the process.

A new report emerged that indicates this holdout could indeed last into training camp.

Mack deserves to get paid, much like Donald. In fact, these two elite defenders are likely playing a game of chicken right now to see which of them will set the new market for top-tier defensive linemen. With that in mind, don’t be surprised if both of them are not with their teams this summer.

It’s been a very strange offseason for Tom Terrific and the Pats. A player who’s always put the team first, Brady has suddenly broken away from the Patriot Way by staying away from team activities (while staying very much in the public eye) except for mandatory minicamp.

Brady has recently indicated he doesn’t feel the love from the Patriots, and there seems to be at least some truth to all the rumors of discord between himself and head coach Bill Belichick.

Throw in the fact that Brady — the GOAT — is making significantly less money than many of the quarterbacks around the league and you’re looking at a situation where this 40-year-old veteran finally plays hardball with his team.