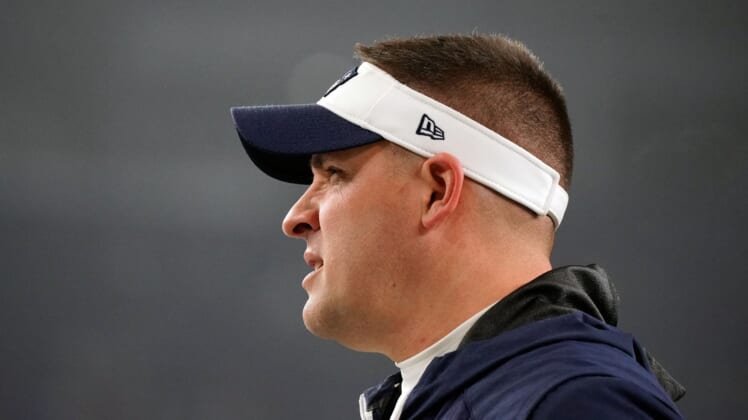 NFL rumors: The Houston Texans made the first hiring of the NFL offseason, bringing in Nick Caserio as their general manager. With another former New England Patriots executive gaining power in Houston, rumors started buzzing about Josh McDaniels becoming Houston’s next head coach.

Caserio spent his entire NFL career with the Patriots, starting as a personnel assistant in 2001. He quickly climbed up the latter in the front office, all while forming an even stronger bond with McDaniels. The friends, former teammates at John Carroll University, seemed like a natural fit as a GM-head coach pairing.

While the search is still ongoing, it seems one candidate has already been ruled out in the running to become the Houston Texans head coach.

According to The Houston Chronicle‘s John McClain. Josh McDaniels is already ruled out as a potential candidate to become the Texans’ head coach.

While he does have a strong relationship with Caserio, Houston wants to go in another direction. The Texans have already requested interviews with several assistant coaches around the league, many of them are among the most coveted head coach candidates this offseason.

Deshaun Watson is expected to have input on who becomes his next head coach. Despite largely running the offense by himself for most of the 2020 season, with an underwhelming supporting cast, he led the NFL in passing yards and finished second in quarterback rating.

As for McDaniels, he might be running out of opportunities to become an NFL head coach once more. After his atrocious tenure with the Denver Broncos, he returned to New England as its offensive coordinator in 2012. After agreeing to become the Indianapolis Colts head coach in January 2018, he backed out on them.

McDaniels was interviewed by the Browns in 2020 and reportedly drew serious consideration. However, he demanded sweeping organizational changes. Cleveland ultimately hired Kevin Stefanski and the team is headed back to the NFL Playoffs.

Related: Candidates who best fit each of the six NFL head coach vacancies in 2021

While McDaniels is off the list of candidates, another hot name is reportedly emerging to become Houston’s head coach. Buffalo Bills offensive coordinator Brian Daboll, one of the hottest candidates in the coaching cycle, could now have the Texans’ interest.

According to Sports Illustrated’s Albert Breer, many people around the Patriots believe Brian Daboll is now in play for the Texans.

Daboll joined the Patriots in 2000 as a defensive coaching assistant, serving on the staff until 2006. He returned to the team as offensive coordinator in 2013, when he reportedly suggested the team hire character coach Jack Easterby. Houston hired Easterby as its executive vice president of team development in 2019 and he took over as interim general manager after he fired Bill O’Brien.

Daboll’s connection with the front office doesn’t end there. He also worked with Caserio during their time together in New England. On top of that. Caserio, Easterby and Daboll all share the same agent.

Given the work Daboll did with Josh Allen in Buffalo, this could be an outstanding hire for the Texans. While Houston hasn’t requested an interview yet, that will likely change in the coming days.