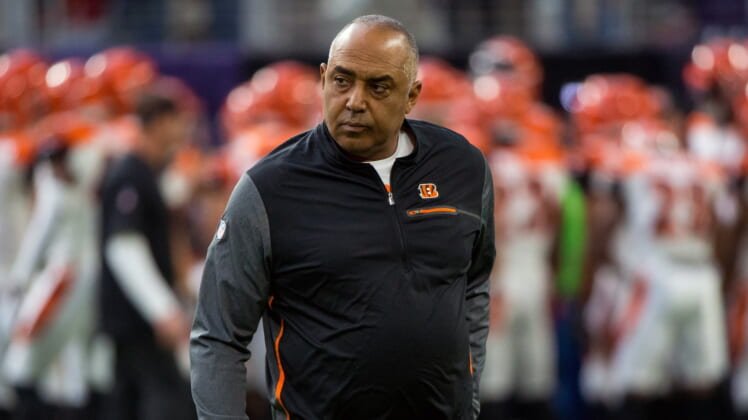 Houston Texans rumors over the next few weeks will primarily include the team’s search for a new head coach following the firing of Bill O’Brien. Houston is also in need of a general manager. Both hires will likely be done in concert with one another.

We now have more information as it relates to who the Houston Texans are targeting to become their next head coach. To say it’s a familiar name would be an understatement.

Former #Bengals coach Marvin Lewis is expected to interview with the #Texans for their vacant head coaching job, per Mike Garafolo and me,” NFL Media’s Ian Rapoport reported on Wednesday. “Lewis is currently on the coaching staff at Arizona State and will draw interest from other NFL teams, as well.”

As noted, Lewis is currently on the Arizona State coaching staff. He’s the defensive coordinator under another familiar NFL name in that of Herm Edwards.

The interest in Lewis seems to run contrary to NFL rumors suggesting that the Texans are looking for an offensive-minded head coach for quarterback Deshaun Watson. It also comes after the Texans interviewed Jim Caldwell, who is known for his prowess on offense.

Texans rumors: Marvin Lewis would bring a ton of experience to the Texans

Lewis, 62, was in the NFL coaching ranks from 1996-2018. That included a pretty successful 16-year-stint as the Cincinnati Bengals head coach. During that span, Lewis led the long-downtrodden organization to seven playoff appearances despite going 0-7 in the postseason.

Prior to Lewis’ arrival in Cincinnati, the team had not earned a playoff appearance in a dozen seasons. Sure he was embattled during the end of his tenure with the Bengals, but there’s a lot to like about the veteran head coach.

Prior to him getting the Bengals’ job, Lewis served as the defensive coordinator in Baltimore and Washington, where he led three top-six scoring defenses in seven seasons. The primary focus in Houston might be on Deshaun Watson and the team’s offense, but it’s important to note that their defense has yielded 28 points per game this season.

Texans rumors have included the team going after big-name head coaching candidates. Lewis would certainly fit that description. However, it’s also important to note that the team is early in the hiring process.

It was previously noted that the Texans wanted to hire a general manager before bringing in a head coach. It’s in this that Texans rumors indicated that Houston had interviewed Louis Riddick for that job. Riddick is widely respected around NFL circles, even in his current role as a media personality.

He worked with Marvin Lewis in Washington when the Texans’ head coach candidate was the team’s defensive coordinator and Riddick served as a scout. So, there’s a relationship here.