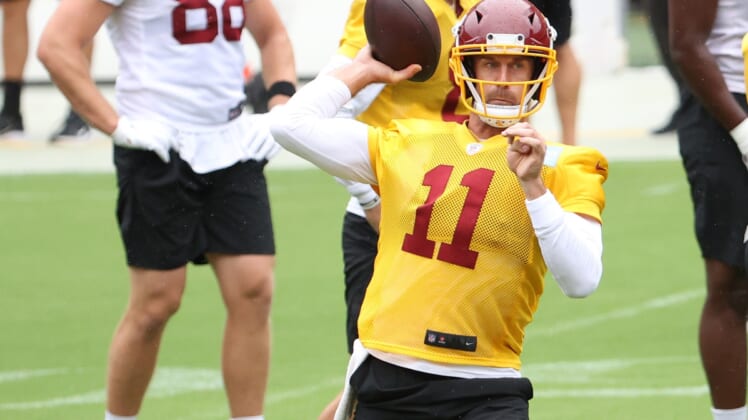 Just like that. The 2020 NFL trade deadline is quickly approaching. It’s now less than a month away and will take part on Election Day around the United States.

We’re expecting it to be an active trade deadline with multiple contenders in need of upgrades during what appears to be a wide-open 2020 NFL campaign. There’s obviously financial hurdles when it comes to pulling off blockbuster trades.

However, some underrated players could be moved ahead of the NFL trade deadline as contending squads look to shore up their rosters. It’s in this that we look at under-the-radar NFL players who could be traded ahead of No. 3 with rumors heating up on the NFL water cooler.

Related: NFL players who could be traded in 2021

Washington’s decision to bench second-year quarterback Dwayne Haskins for Week 5 was somewhat of a surprise. However, the decision to go with Kyle Allen over Alex Smith was an even larger surprise. If Smith is 100% recovered from the devastating leg injury he suffered back in 2018, he should be under center in the nation’s capital. Apparently, Ron Rivera wants go with a lesser quarterback in Allen who played under him with the Panthers last year.

The issue with a potential Smith trade is that most contenders already have established starters. It’s possible of a squad like the Minnesota Vikings, Chicago Bears or Denver Broncos could pull off a Smith trade to push their current starters. Counting $21.4 million against the cap this season, a Smith trade wouldn’t financially handcuff a number of organizations, either.

We already know that Jets head coach Adam Gase is in over his head in that role. But it’s pretty stunning how defensive coordinator Gregg Williams has impacted the performance of Williamson thus far this season. Last week saw the former Kentucky star play just 44% of the Jets’ defensive snaps. A lesser linebacker in Alec Ogletree played in 56% of the Jets’ defensive snaps in their loss to the Denver Broncos.

If New York is not going to utilize one of its best defensive players to the best of his ability, it might as well trade Williamson. According to Pro Football Focus, he’s the 10th-best linebacker in the NFL heading into Week 5. The Jets simply need to trade Williamson ahead of the deadline. Multiple contending teams would come calling if these rumors of him being on the block come to fruition.

With Joe Mixon showing up behind rookie No. 1 pick Joe Burrow in Cincinnati’s backfield, the team has not used Bernard much this year. In fact, the former second-round pick has attempted four rushes in as many games. That’s a far cry from Bernard being one of the better all-purpose backs in the NFL earlier in his career.

The Bengals would be smart to trade Bernard and add to their draft-pick stockpile as they look to expedite their rebuild. Bernard, 28, is counting a mere $4.77 million against the cap in 2020. Prior to this year, the former North Carolina standout averaged north of 820 total yards per season throughout his career. He’s also put up 307 career receptions. He could very well make sense in a trade for a team like the Seattle Seahawks or Buffalo Bills as a third-down back. This rumor should gain steam ahead of Nov. 3.

At 1-3 on the season and boasting one of the NFL’s worst defenses, things are not going swimmingly for the Lions. Head coach Matt Patricia could very well be on the hot seat. The Lions continue to waste the back end of Matthew Stafford’s prime, which led to trade rumors this past offseason. At some point, Detroit is simply going to have to start anew with a full-scale rebuild.

Enter into the equation this underrated veteran receiver. Jones, 30, averaged 53 receptions for 829 yards and seven touchdowns in his first four seasons with Detroit. Despite still playing a vast majority of the Lions’ offensive snaps, he’s recorded just 12 receptions for 138 yards through four games. Some contending team would be smart looking to trade for the consistent pass catcher. Of those teams, the Philadelphia Eagles and Buffalo Bills could make sense.

Immediately after signing this former Pro Bowler to a five-year, $66.5 million contract during the spring of 2018, trade rumors have surrounded Norwell. Now that the jaguars are 1-3 on the season and going nowhere fast, expect these rumors to heat up moving forward. Remember, Jacksonville has been in fire sale mode over the past several months. That’s not going to change any time soon.

We previously on the Minnesota Vikings potentially showing interest in a trade for Norwell. Despite his relatively high price tag, Norwell remains one of the top guards in the NFL. It’s a position of utmost importance for contending squads. And it will lead to further rumors ahead of he trade deadline.

Arizona has struggled getting rookie first-round pick Isaiah Simmons on the field this season. In fact, Simmons has played in 15% or less than Arizona’s defensive snaps heading into Week 5. The team has found it difficult to find a spot for the linebacker/safety hybrid. A trade of Hicks would pretty much solve these issues.

A former Super Bowl champion with the Philadelphia Eagles, Hicks has pretty much been a full-time starter in the NFL since his rookie season back in 2015. While I don’t want to start an unwarranted rumor here, it would make sense for a contender like the New England Patriots to show interest in a Hicks trade. He’d be an upgrade over both Ja’Whaun Bentley and Brandon Copeland.