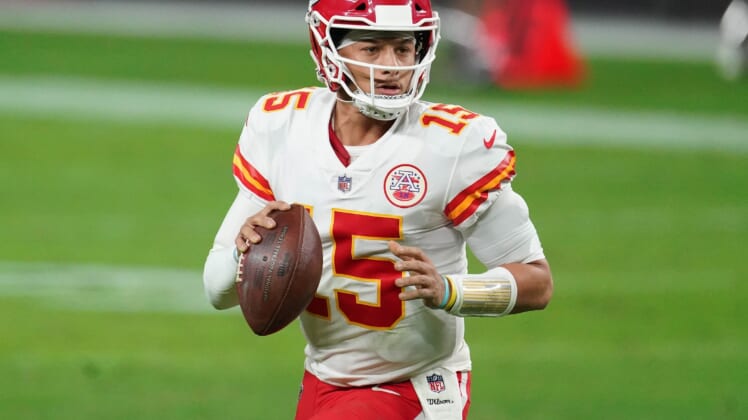 No matter which platform we used to draft (Yahoo Fantasy Football, ESPN, NFL.com), we all can agree that the 2020 fantasy football season has been a wild ride, and these fantasy rankings reflect that.

As the playoffs approach, many top fantasy players from 2019 who were drafted highly in 2020 have failed on one level or another. Even worse, some of those players are done for the season, healing from injuries and surgeries.

Thankfully, savvy waiver wire pickups throughout 2020 have delivered plenty of fantasy points to help roto enthusiasts pick up the slack.

Here are our top 2020 fantasy football rankings heading into the playoffs.

Mahomes has been nothing but solid gold for his fantasy owners. He’s thrown 36 total touchdowns to date against just five picks. Meanwhile, Mahomes is averaging a lofty 339.2 total yards per game. You’re likely killed it in playoffs if this Super Bowl-bound QB was your starting fantasy quarterback.

Wilson consistently rewards fantasy points and has averaged 326.8 total yards per contest on top of 32 touchdowns. Fortunately, these big numbers help offset his 10 interceptions. Overall, though, Wilson is a QB1 in every fantasy format.

Murray already has 650 rushing yards throughout 11 games. On top of that, he’s posted 255.8 passing yards per outing and has accounted for 29 total touchdowns. Nine picks have come along the way, but Murray remains a fantasy start every week.

Snubbed in higher rounds of drafting, Rodgers sports a 33:4 touchdown-to-interception ratio, and he is delivering an average of 281.8 passing yards to his fantasy owners. He’s more than contradicted anyone who viewed him as washed up, as he remains a highly-ranked fantasy quarterback.

Perhaps it’s Rodgers’ dedication to practicing yoga that keeps him and other top athletes, flexible and fit for game day.

Much credit is due to Herbert emerging as a top fantasy football dynasty rookie. Since starting, Herbert has been a gem. He has averaged an impressive 301.5 passing yards and has scored 26 times. Whether it pertains to dynasty or redraft fantasy football, Herbert’s future is bright!

Watson has kept his picks limited to only five while accounting for 26 total TDs. He has also rewarded his fantasy owners with 317.6 total yards on average. Let’s just hope the absence of Will Fuller (PED suspension) won’t impact Watson’s fantasy outlook during the home stretch of 2020.

Slightly inconsistent at times, Allen has still managed to average 303.5 total yards per game and has a combined 28 touchdowns passing and rushing. Even with eight interceptions along the way, Allen has thus far helped owners emerge with fantasy rewards often enough to justify the risks of deploying him.

At times, Brady has been on thin ice with his fantasy owners, but at the end of the day, he’s been productive. TB12 is putting up 275 yards in passing per game and has 31 touchdowns on record. However, we cannot ignore those awful 11 interceptions. Maybe a late Week 13 bye gives the 43-year-old time to recuperate, rejuvenate and finish 2020 strong.

Rejuvenate and finish strong is an understatement. The old GOAT is now playing in Super Bowl LIV, facing the Kansas City Chiefs. Should the Bucs pull out a victory, Brady will be wearing Ring No. 7. And, if he doesn’t, he will be there for the taking in fantasy drafting in 2021, and perhaps beyond.

Big Ben has been healthy enough to play the whole season, which is a plus. So far, he’s averaged 254.4 passing yards and has scored 25 touchdowns, limiting his interception total to six. Those who took Roethlisberger as a later-round pick have reaped big benefits.

Tannehill is a safe fantasy quarterback. Overall, he has been fairly consistent in posting 250.9 average yards per clash. Fortunately, he’s kept his interceptions (four) low and has scored 25 total times. Those who are relying on Tannehill each week could certainly do worse at quarterback.

Cook has been a fantasy rock. He has scored a league-high 13 rushing touchdowns, while averaging a sweet 138.5 total yards per game. Owners can only hope Cook stays healthy as they compete for fantasy championships.

Henry is having another monster fantasy season. He leads the NFL with 114.3 rushing yards per game and is not far behind Cook with 12 trips to the end zone. With Henry typically thriving late in the season, watch out world!

Henry delivered the goods just as we suspected he would. He finished 2020 increasing his average rushing yards per game to an astronomical 126.7, which accompanied a league-best 17 rushing scores.

Kamara has delivered fantasy points by combining for 111.9 total yards per game. He’s been a clutch pass-catcher all year, logging 6.2 receptions per week on top of scoring 12 total times. Alas, the presence of Taysom Hill has taken a noticeable hit on Kamara’s numbers. Stay tuned.

Robinson was likely nabbed from the waiver wire in most leagues, and now he’s one of the top-ranked fantasy running backs in 2020. He is reliable and has yet to miss a game, while averaging 106.4 total yards per contest and scoring eight times.

Despite the fact that Jones has missed a couple of games, his production when he’s been on the field has been solid. Jones has scored eight times in nine games and has averaged 98.3 yards per week in this stretch. Fantasy owners can only hope they see more Jones and less Jamaal Williams down the home stretch.

Aside from his injury, Chubb has been a fantasy stud. He’s averaged 102.7 rushing yards per game on the season, and has no less than 114 rushing yards since his return in Week 10. The Browns star has a nose for the goal line as well, notching six touchdowns to date. If Chubb is your ride-or-die back through the playoffs, he should serve your team well.

This rookie was a bit slow to emerge in 2020. However, Gibson is now a fantasy start, no bones about it. He has 11 rushing touchdowns in 2020, and has averaged 122 total yards in his last four games. As long as he stays healthy, Gibson should be in all lineups throughout the playoff run.

Jacobs’ fantasy production is not always consistent. He’s averaging 87 yards per game, which could be better. Fortunately, Jacobs has nine touchdowns to help beef up his fantasy rankings, making him a serviceable RB2. Fingers crossed that an ankle injury he’s dealing with is just a minor one.

Jones turned out to be the workhorse for Tampa, and as such, he’s rewarded fantasy owners with an average of 81.7 yards per contest on top of six scores. From here on out, we should expect more of the same.

Carson is hard to stop when he’s pounding the ball at 4.9 yards per carry. While he is averaging a middling 75.6 total yards per matchup, he has found the end zone seven times in as many games. If healthy, Carson is always a fantasy start.

With five more games to go, Hill is on pace to score 19 touchdowns in 2020. He’s simply too much of a handful for defenses to shut down. So far this season, he’s been a trusty WR1 who is averaging nine targets and 92.8 yards per clash.

Despite being out of action for a couple weeks, Adams is averaging a league-high 100.9 yards per contest. Fantasy owners have indubitably enjoyed the 11 touchdowns Adams has caught from Aaron Rodgers over his nine games. Look for more of the same as long as Adams remains healthy.

Metcalf leads the NFL with 1,039 yards thus far, while he’s averaged a big 17.9 yards per catch. There’s not much fantasy owners can’t like as the second-year stud looks to add onto his nine touchdowns scored thus far in 2020.

Diggs is new in Buffalo, and hits those WR1 numbers more often than not thanks to the quick chemistry he built with Josh Allen. As such, fantasy owners have been rewarded with a generous 80 receptions for 945 yards. A late-season uptick to add to Diggs’ four touchdowns, however, would be ideal.

And, that indeed did happen. Diggs put four scores on the board between Weeks 14-17. He accomplished enough that he’s now our top-ranked dynasty fantasy WR heading into 2021.

Hopkins too, could stand to score more than the four end zone trips he’s made in 2020. However, the fantasy spoils still pour in with Nuk, who’s averaging 87.9 yards per game resulting from 77 catches on the season.

Jefferson is having a studly rookie campaign. He’s made some huge, explosive plays and is averaging 17.7 yards per catch. To date, Jefferson has racked up 918 yards and six scores, providing plenty of fantasy points to the owners who stuck with him.

Thielen has been a beast in the red zone, managing 11 touchdowns in 10 games thanks to his uncanny ability to come down with contested catches. While his 49 receptions aren’t as high as other No. 1 wideouts, Thielen does boast a healthy 13.2 yards per reception.

Over 10 games, Ridley has scored seven times while making many big plays. He’s averaging 79.7 yards per game and a strong 14.8 yards per reception. Meanwhile, Julio Jones has taken a backseat as more of a sidekick.

McLaurin is having himself a great fantasy season. He ranks fifth in overall receiving yards (967), stemming from 69 receptions. It’s his lowly total of three touchdowns that unfortunately drags him down in fantasy rankings.

Kelce is the fourth Chief to qualify in our top-ranked fantasy players for 2020. He is averaging 88.9 yards per game, which is the third-most yardage in the NFL. Merge that with his scoring production of seven touchdowns, and no tight end can catch Kelce in the No. 1 slot of these fantasy rankings.

Waller has received 90 targets, making him the second-most targeted tight end in 2020. This has helped boost his fantasy rankings, making him a reliable starter. With that said, Waller has scored five times, while averaging only 49.3 yards per game. Quarterback Derek Carr has spread the ball around more, and defenses are keying in on Waller as Las Vegas’ primary weapon in the passing game.

While Darren Waller still ranks No. 2 behind Kelce, we must give him credit for becoming only the fourth tight end in NFL history to reach 200 yards in one game, according to Pro Football Focus. On Sunday, December 6, 2020, Waller absolutely destroyed the New York Jets after he caught 13 passes for 200 yards and scored two touchdowns!

Andrews is not having the elite season he did last year. However, he’s been rather dependable as a TE2 throughout 2020. Hopefully, Andrews makes it back to the field to add onto the 454 yards and six touchdowns he’s left fantasy owners hanging with thus far.

Hockenson has stepped up his performance from his rookie 2019 year. The former No. 8 overall draft pick has been consistently targeted (6.2 times per game), amounting to 48.2 yards on average, which is just outside Waller’s production. Plus, Hockenson has caught five TDs in 2020 to reward fantasy owners with a boost along the way.

In a tight race to call No. 5, Tonyan has emerged as a dependable fantasy tight end more often than not. He’s rewarded his fantasy owners with seven scores and has averaged 41.6 yards per game. Those who plucked Tonyan from the waiver wire have been plenty satisfied.