While the New York Yankees were unable to gain any real traction on an MLB trade deadline deal for Juan Soto, one league insider believes they will definitely be players if arguably the best player in baseball, Shohei Ohtani, is traded this offseason.

Soto was undoubtedly the biggest fish on the trade market this summer. He is one of the 10 best players in MLB right now and is still under contract for two more seasons at an absurd bargain rate. While many teams were in the hunt, the San Diego Padres were able to snag Soto — and slugger Josh Bell — by offloading a massive haul that included some elite prospects.

Another player that was rumored to be up for grabs was Los Angeles Angels superstar Shohei Ohtani. The generational talent would have been a bigger return than Soto, but there was never a sense that the Angels were for real about moving him this summer. However, with only one season left on his current contract, and the team headed to a seventh straight losing season, the Angels need to seriously think about the idea of moving him this winter.

The type of return Ohtani could earn LA would help to set up their future and give them a better chance at a successful rebuild in the years ahead. One team that could be a major contender in the Ohtani trade market is the Yankees.

On Friday, New York Post MLB insider Joel Sherman claimed that since New York did not sell off any of their elite prospects at this year’s deadline, that means all of them could be key in landing Ohtani in the offseason.

The Yankees had a very productive couple of weeks before the Aug. 2 MLB trade deadline. They were able to acquire two of the biggest names on the market in outfielder Andrew Benintendi and pitcher Frankie Montas. And they managed those moves, and several others, without giving up any of their top prospects. 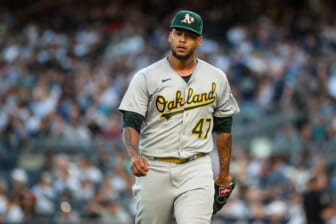 The organization will be a serious title contender this fall, however, if they are unable to secure a 28th title in October, expect the likes of Volpe and Dominguez to be on the table if the elite hitter, and pitcher that is Ohtani is on the block.