Soto became available after he rejected Washington’s 15-year contract extension worth $440 million which would have made him one of the highest paid MLB players ever. After the reigning Home Run Derby champion rejected the final offer, the Nationals moved forward with a trade.

From the start, the Padres were viewed as the frontrunners to land Soto. A.J. Preller, San Diego’s president of baseball operations, nearly signed as an international free agent in 2015 (The Athletic). Years later, one of the most aggressive decision-makers in baseball finally lands his superstar.

Barry Svrluga of The Washington Post first reported Tuesday morning that the Padres and Nationals were making significant momentum towards a deal. After more than a week of negotiations, the two sides struck a deal before the 6 p.m. ET trade deadline.

With both the Nationals and Padres currently playing at home, Soto likely won’t debut with his new team until Wednesday at the earliest. However, it’s another monumental addition for San Diego just a day after it acquired All-Star closer Josh Hader.

The Padres are adding impact talent at the perfect time and more is coming. Fernando Tatís Jr. is finally swinging a bat, inching towards a rehab assignment that could have him back in the San Diego Padres lineup in August.

Gore, an elite pitching prospect, is currently sidelined with an elbow injury but isn’t expected to miss significant time. Once he is cleared to return, he would immediately slide into the Nationals’ rotation. 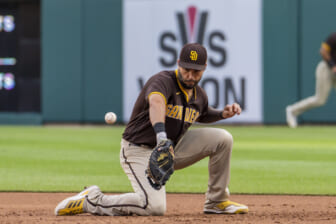 The 23-year-old is arguably the most patient hitter in the batter’s box. Soto’s league-high 20.9% walk rate is 3.4% higher than the second-ranked batter (Max Muncy, 17.5%) and 5.4% higher than the third-highest walk rate (Aaron Hicks, 15.1%). Unsurprisingly, per FanGraphs, Soto also has the fifth-lowest rate of first-pitch strikes faced (52.5%).

Already a World Series champion and two-time selection to the All-MLB First Team before he turns 24, the left-handed hitter has turned things around in recent months.

This is a franchise-changing addition for San Diego and he will provide a dramatic improvement to the lineup. Since June 1, the Padres rank 14th in OBP (.318) and 13th in wRC+ (105). The lineup also is below-average against right-handed pitching, placing 17th in wRC+ (98) and 20th in OPS (.688) this season.

For now, it remains unlikely that Soto signs a long-term extension with the Padres. Even if San Diego is willing to offer him the first $500 million contract in MLB history. Represented by agent Scott Boras, it’s in Soto’s best interest to test the open market as a free agent in 2025.

Even if he only remains with the Padres through 2024, San Diego is adding arguably the best hitter in baseball with the ceiling of a future Hall of Famer. Even at the cost of premium prospects, that’s a talent worth adding.

Bell is an unexpected wrinkle in San Diego’s moves at the deadline. The switch-hitting first baseman generated plenty of interest, with the New York Mets and Houston Astros among the clubs that pursued him. Instead, he winds up as part of potentially one of the biggest trades in MLB history.

The Padres were never pleased with the results from Eric Hosmer. Entering Aug. 2, San Diego’s first basemen ranked 18th in wRC+ (107), OPS (.727) and 29th in isolated power (.119). Bell changes the outlook for the position dramatically.

While he will likely play a majority of games at first base for San Diego, Bell is also capable of playing the corner outfield. What’s important here is that San Diego both landed a superstar to add to its lineup and upgrade at first base in one single move.

When Tatis returns in a few weeks, the Padres will have the lineup, starting rotation and bullpen to compete for the World Series.