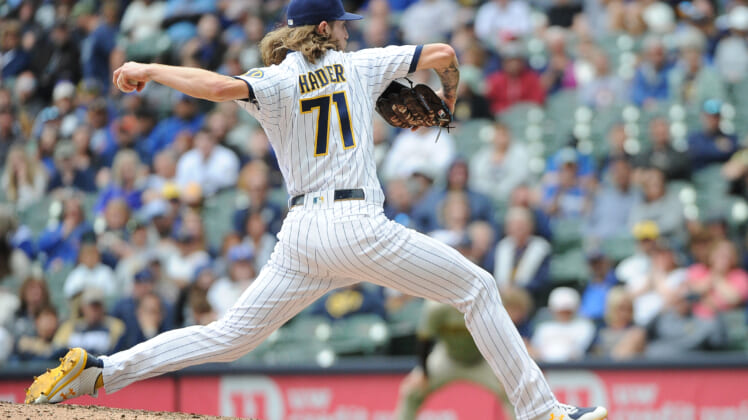 The San Diego Padres have just pulled off a whopper of a trade ahead of the deadline. It may not be Shohei Ohtani or Juan Soto, but landing a four-time All-Star closer is pretty damn good.

According to Jeff Passan, Josh Hader is heading to the Padres, sending a mix of prospects and MLB players back to the Milwaukee Brewers in exchange.

There’s a lot of moving parts. Let’s break down the trade for both teams.

It was becoming apparent that the magic Taylor Rogers had to begin the year had been wearing off in San Diego. With Rogers’ contract set to expire at the end of the year, general manager A.J. Preller decided to swap one All-Star closer for another. Only Hader is under contract through 2023 and is the current saves leader in the MLB.

Rogers had given up a run in eight of his last 11 appearances, leaving the Padres with very little faith in their finisher. Now with Hader coming aboard, who, like Rogers, is a lefty, not only do they let more long-term security, they’re also getting one of the game’s best closers.

Hader, like Rogers, has experienced some struggles too. Most notably in two outings from July 13-15, where he allowed nine runs, getting just one out. But he’s made 37 appearances this season and has allowed a run in just nine of them.

Meanwhile, the Padres have also managed to hold onto many of their top prospects, which keeps the hope for a Soto trade alive.

Who did the Milwaukee Brewers get for trading Josh Hader?

This is sneakily a strong trade for the Brewers. They swap one All-Star left-handed closer for another, but they also added much more.

Josh Hader was set for free agency after the 2023 season. The Brewers saw value in letting him go by getting a collection of talent in exchange.

While Devin Williams will likely now step into a closing role, Taylor Rogers is a valuable high-leverage situation arm, who can get the job done too. While he’s had his struggles lately, he still ranks second in games saved this season, one behind Hader.

While Rogers may make the biggest impact early on, it’s the others who help make this deal a steal, of sorts.

Lefty Robert Gasser was the seventh-ranked prospect in the Padres’ organization. He has three plus pitches — a fastball, slider, and changeup while possessing good command. Currently 23, he’s projected to make his debut at some point next season.

Outfielder Esteury Ruiz, 23, has already seen MLB action, but not much. He’s ranked as the 28th top prospect in San Diego’s system and has blazing speed. He may only serve in a utility role in the outfield for now, but his baserunning ability is a weapon the Brewers can put to use right away.

Dinelson Lamet has never lived up to being the top prospect many projected him to be, but it’s possible a change of scenery could do the 30-year-old pitcher some good. But he hasn’t pitched more than 100 innings since his rookie season in 2017. Anything the Brew Crew can get out of Lamet will be a bonus.

While none of the prospects appear to have the ceiling Hader had, the total collection of assets the Brewers received could pay off in the long run. At least their bullpen shouldn’t suffer too much in the short term with Rogers able to pick up where Hader left off.