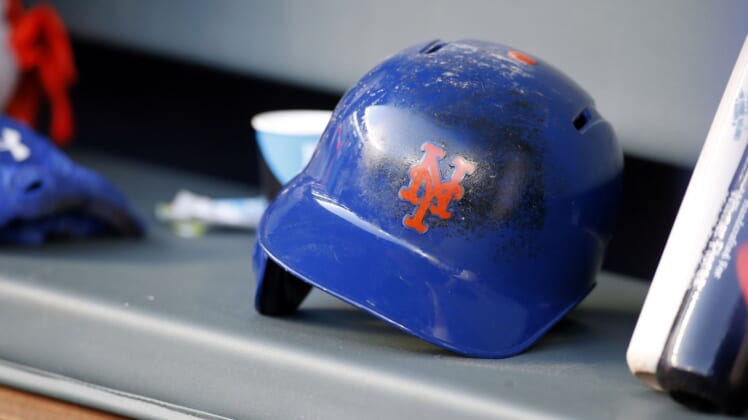 May 2, 2017; Atlanta, GA, USA; General view of New York Mets helmet in the dugout before a game against the Atlanta Braves at SunTrust Park. Mandatory Credit: Brett Davis-USA TODAY Sports

Ellis is the latest to be let go in another disturbing indication that there’s a trend among Mets leadership that’s likely made for a rather toxic work environment in recent years.

What’s most unsettling about the news that just broke is that the complaints filed against Ellis were from the summer of 2018, and went largely unpunished until he was let go in January.

Brittany Ghiroli and Ken Rosenthal of The Athletic reported on the reasoning behind Ellis’ termination, which initially occurred about a month ago. However, the reason for Ellis’ dismissal wasn’t made clear until The Athletic’s report dropped.

Included in the article are lewdly-worded remarks Ellis made and the revelation that three women who were either current or prior Mets employees came forward in 2018 to report on Ellis’ misconduct. At the time, the Mets simply ordered Ellis to undergo counseling and placed him on probation, but didn’t fire him.

One of the three women who filed a complaint about Ellis explained to The Athletic that they were unsure why the club conducted an internal investigation, as opposed to bringing in an impartial investigator to get to the bottom of what happened with Ellis and the women in the workplace.

“I never understood why they didn’t outsource the investigation to begin with,” the woman said. “I think a third party would have handled it much better.”

The implication is that Ellis’ behavior was covered for — and it’s not a canyon-sized logical leap to make.

It was only when disgraced general manager Jared Porter’s unbecoming behavior came to light in January that Ellis also got the pink slip. Had news of Porter’s explicit texts sent to a female reporter not broken, New York would’ve carried on with business as usual.

The hope is that accountability in the Mets organization improves when it comes to the treatment of their employees and media members, wherein there’s mutual respect and professionalism. Unfortunately, certain key figures in New York exploited their positions of power.

One can only hope this scandal involving Ellis, Porter and the Mets creates a swifter removal of such behavior in the future not just for the team, but across all of MLB and other major sports.

Letting Ellis skate by for no less than three years after the initial pattern of his behavior was established was definitely not the right move in this case.