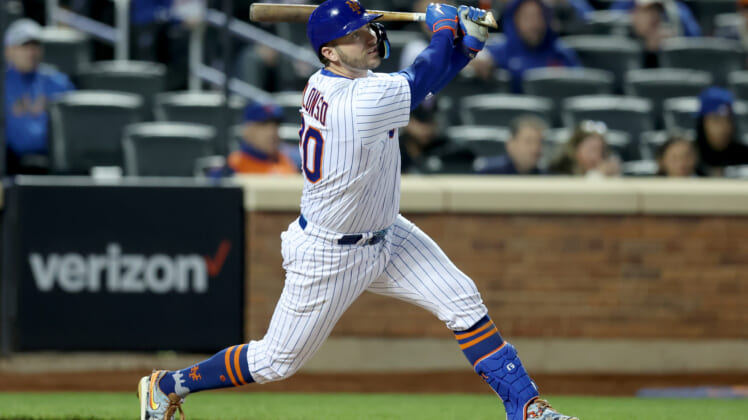 There are plenty of MLB games today but if you believe a theory reportedly held by New York Mets players, we could see quite a few home runs in the Sunday Night Baseball matchup on ESPN.

Major League Baseball finds itself dealing with controversy once again regarding baseballs. Amid an unexpected drop in home runs with hitters delivering towering shots that fall short at the warning track, the spotlight is once again on the composition of the baseball.

It’s widely believed that MLB is using ‘deadened’ balls this season that were made in 2021. It could be part of the reason, in addition to colder temperatures and delayed spring training why the home run rate in 2022 (0.92) is at its lowest point since the 2014 season (0.86).

However, there is one other theory inside an MLB clubhouse that would suggest league officials are using different baseballs for marquee games.

“The ball was traveling farther—balls that weren’t hit as hard. And I’m like, wait a minute, that shouldn’t have happened. The ball was just traveling better. That was the eye test, but then we lined it up with what the analytics were telling us.”

There could be some merit to the idea. In that Sunday Night Baseball game against the Philadelphia Phillies on May 1, four home runs were hit and the teams combined for 16 runs in nine innings.

“We’ve been hitting balls 104, 105 [mph] at the right launch angle that aren’t leaving. And all of a sudden, now we’re hitting balls 95—a little less hard than the other balls—and those balls are traveling on Sunday night.”

MLB acknowledged it used two different sets of baseballs in 2021, with one much livelier than the other. It’s possible, especially based on the steep drop in league-wide OPS and slugging percentage, that deadened baseballs are being used to decrease the number of home runs.

While MLB would likely never confirm it is using ‘juiced’ baseballs in nationally-broadcasted games, the league’s history suggests no one should be surprised if it’s true.