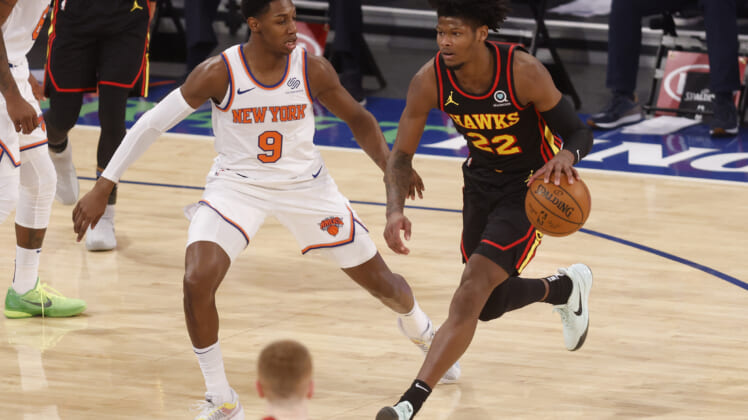 The New York Knicks acquired Cam Reddish from the Atlanta Hawks on Thursday morning. When it comes down to them getting back to the playoffs, though, RJ Barrett’s play is paramount.

New York has won four of its last five, which has them tied with the Boston Celtics for the 10th seed in the Eastern Conference at 21-21. Coming off a season where they were the fourth seed in the East, the Knicks need to return to the playoffs, as they try to build on their 2020-21 success. That’s where the third-year Barrett comes into play.

Here’s why a consistent version of RJ Barrett is the key to the Knicks going to the playoffs and advancing past round one.

Barrett, like the Knicks as a whole, has been volatile this season. At times, he looks like a budding star. Other times, it looks like his growth has been stunted.

The Duke product has played to his career tendencies this season. He’s finding success off the dribble while defending well and shooting from the perimeter at a respectable level. Furthermore, Barrett has put together several eye-opening performances; he has five 30-plus-point games this season (42 games), three of which have come over the Knicks’ last five games. For perspective, he only had one 30-plus-point game in his first and second seasons combined.

On the other hand, his minutes have been all over the place, as head coach Tom Thibodeau has shuffled several five-man units at the end of games. Barrett’s play is a catalyst for that, as he has been too prone to silent starts. As a result, Barrett’s scoring and impact have been scattered.

At his best, Barrett looks like a franchise player. Other times, he looks like a player who’s trying to find himself. The Knicks need to see more of the player who takes over games and leads the scoring charge. That comes from both Barrett smoothing out his game and Thibodeau keeping Barrett on the floor when he’s off to an inauspicious start.

This is what creates the potential for the New York Knicks to become a legitimate competitor in the East.

A consistent RJ Barrett makes up for Julius Randle’s inconsistency

If Barrett becomes an offensive force, it takes some attention off Julius Randle, aiding the latter in what has been a down season compared to his 2020-21 output.

In his first season with the Knicks, Randle was productive but his impact was a gray area, as the team was the 12th seed in the conference. Last season, he was an All-Star who impacted the game in a variety of ways and was the backbone of the Knicks’ offense. This season, he has been a combination of years one and two.

On one hand, Randle is the player who defenses are focusing on given his ability to stick outside jump shots, operate in isolation, score in the post and put the ball on the floor. At the same time, he has been less efficient and a bit hesitant with his shot selection.

Randle is capable of better play, especially since one could argue that he led the way for a less-proven roster last season, but the Knicks need someone to make up for his current shortcomings. Barrett is the immediate candidate to do as such. He has room for growth, has gradually improved and can get points both inside and outside.

Randle and Barrett are in their third season together; they have chemistry and familiarity with each other. The 21-year-old being an offensive pillar allows Randle to slow the game down.

The New York Knicks went 41-31 last season by being a stout defensive team and having an efficient halfcourt offense. It appears they’ve gone all-in on being a wing-based operation without a dominant point guard, which was reiterated by Kemba Walker’s initial benching and now the acquisition of Reddish.

Randle is the star of this team, but no one has ever consistently benefited from the attention he attracts offensively. If Barrett begins to do as such and/or diverts eyeballs from Randle, the team’s roster makeup can pose a threat to the rest of the conference because they wouldn’t be one-dimensional on that end of the floor. 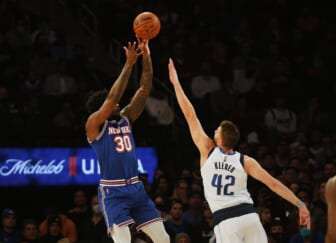 Thibodeau has a bevy of wings who can shoot and in some cases are primary shooters (Evan Fournier, Alec Burks, Quentin Grimes and now Reddish). Most of those players, to a degree, are capped in impact. Barrett is not.

The Eastern Conference is a cluster of competitive teams that are difficult to separate from one another. Frankly, there are 12 teams with a path to the playoffs. It’s the Knicks’ job to get themselves away from that pack. If they get rolling, the Knicks could set their sights on avoiding the NBA Play-in Tournament, but that’s only going to happen if something fundamentally changes in their offense.

The key to the playoffs for the New York Knicks remains unchanged after acquiring Reddish: they need a consistent, All-Star-caliber version of Barrett.