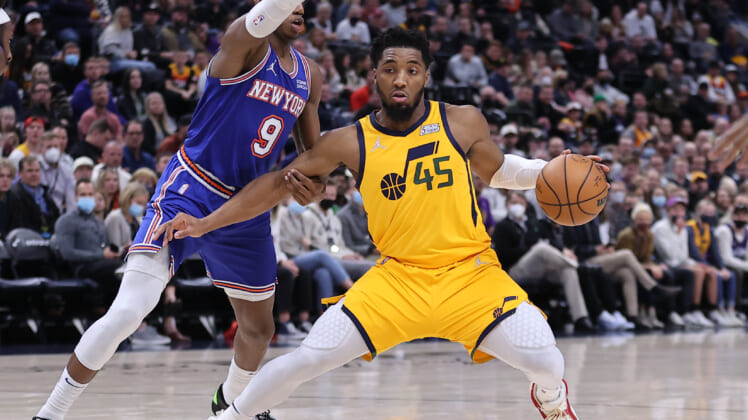 It’s hard to get with the masses wanting the New York Knicks’ front office to sell all to get Donovan Mitchell. Some Knicks fans are ready to call for team president Leon Rose’s head if this trade does not happen. Sorry guys/gals. Not at this time, for any price. The Knicks have a great young core, and the addition of Jalen Brunson only makes them better. No, they’re not Eastern Conference Finals better, but then again, maybe they are.

You argue Donovan Mitchell is a three-time All-Star. But Mitchell, with Rudy Gobert and Mike Conley, never got to the Utah Jazz to the Western Conference Finals. The Athletic’s Tony Jones also said on ESPN 700 that Danny Ainge is asking for a truckload.

“The two teams have had substantial talks, they’ve had ongoing talks. There was a feeling that things were a little bit close as late as Tuesday night, but the Knicks, according to my sources, kinda backed away.

I have some sources that are telling me that Danny Ainge is asking for everything but the Statue of Liberty. I had a really good source tell me that the Jazz asked for at least six of New York’s eight tradeable first-round picks and all of New York’s high-impact young guys. So that will be Quentin Grimes, Emmanuel Quickley, Obi Toppin, Miles McBride.

Donovan Mitchell is not Kevin Durant. Should the Knicks even dare to give Danny Ainge Durant-type assets for Mitchell? Donovan will still be a “star” in three years when he’s a free agent. Maybe even a better star.

Why should the Knicks help the Utah Jazz rebuild when that is what they should be doing themselves? They should at least be working on why they fell from fourth seed in 2021-22 season to 11th seed this past season.

The Knicks needed a point guard desperately. So they got the hometown boy Kemba Walker as a fast fix for the problem. Unfortanately, the young man didn’t last the full season in the rotation. Why? His problem was his 31-year-old body unable to handle the starting lineup minutes.

No gel in the locker room

The arrival of Walker and Evan Fournier did not uplift the team. After every game, every loss, what came out of the locker room was, “we need time to gel.”

The latest “stars” may have shaken Julius Randle. He never seemed to gel with his teammates. We all saw how he treated Evan Fournier when Evan tried to calm him down during a game. Perhaps, Randle didn’t like getting new “stars” after earning the NBA’s Most Improved Player in 2020-21.

What will Mitchell do for the New York Knicks?

What will Donovan Mitchell do for the Knicks? Will he take them to the Eastern Conference Finals? No, especially if the Knicks give away players like Grimes, Quick, Obi and McBride. How far can he take them? To the second round of the playoffs?

Seventh seed to the play-ins? Yes. Mitchell can’t fix the Knicks. The Knicks have to be fixed first. The continuous cycle of role players in and out of that New York Knicks’ locker room is what causes the stress in the Big Apple. Donovan Mitchell is not the “A” option.

The Dallas Mavericks sent the Jazz home in six games in the first round of the Western Conference Playoffs. Jalen Brunson shook Donovan Mitchell for 41 points. It doesn’t matter if Mitchell scores 25 points a game if he lets an opponent score 41 points. Mitchell does not play defense. He couldn’t defend a fly from a fly swatter. You are adding another star that has to be fixed.

And what about Evan Fournier? Fournier, the man who broke John Starks’ single-season record for three-pointers. (And he did it against the Celtics). Is he to be relegated to the bench? He just signed a four-year, $73 million contract with the Knicks and had a good season.

Giving away the first-round picks and promising young players won’t fix anyone but Danny Ainge. Last I checked, the Knicks don’t help Celtics, current or former.