New York Jets wide receiver Elijah Moore has been the biggest story thus far in the team’s 2022 training camp, and it seems his impressive performance has already earned him the WR1 spot on the depth chart.

In 2022, Jets quarterback Zach Wilson will have a lot of pressure on him to make major improvements and display he has grown as a possible franchise QB in his second season. There will also be a great deal of pressure on head coach Robert Saleh to aid Wilson in his development as he leads the team in his sophomore season with the Jets.

However, Wilson’s success this season may very well hinge on the weapons he has in the passing game. Last season, the team’s top two receivers — Corey Davis and Moore — had less than 1,000 yards receiving combined. New York’s wide receiver corps. was one of the worst in the league in 2021, but there is a lot of hope around what this season’s group can do.

Obviously, first-round pick Garrett Wilson will factor into the WR depth chart, and early reports suggest he will be a dynamic edition. However, it seems that in his second training camp for Gang Green, Moore has been outstanding and quickly retained his spot as Wilson’s top target. 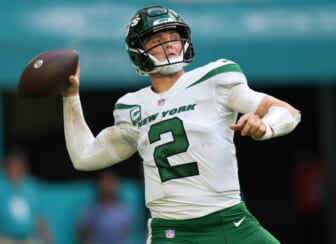 Could Jets receivers be the team’s strongest position?

Adding to the potential for big things from Moore and the rest of the receivers in 2022, on Friday SNY NFL expert Brandon London spoke about New York’s pass catchers and why there is so much to like.

Moore caught 43 passes for 538 yards and five touchdowns in his NFL rookie season.