The New York Giants actually did it. Taking on the Minnesota Vikings on the road in Sunday’s NFL Wild Card Playoffs, New York found itself as underdogs.

Most didn’t have faith in quarterback Daniel Jones to do his thing against a much more-seasoned Kirk Cousins. About that? Jones put up a record-setting performance as his Giants came away with the 31-24 win.

As for Minnesota, its stars failed to show up in this one. That included Mr. Cousins’ late-game gaffe with everything on the line. Below, we look at the five biggest winners and losers from the New York Giants’ stunning victory over the Minnesota Vikings.

Lawrence doesn’t necessarily get a lot of play outside of the New Jersey area. But the former first-round pick from Clemson is one of the primary reasons New York’s defense exceeded expectations during the regular season. He recorded 28 quarterback hits and 7.5 sacks en route to earning Second-Team All-Pro honors.

You’ll notice a theme in this article. Minnesota’s stars did not come to play on the offensive side of the ball. Cook ran for just 60 yards on 15 attempts while hauling in six passes for a mere 10 yards. All said, he averaged 3.3 yards per touch.

In a game that saw Cousins under pressure a whole heck of a lot, more balance would have helped the Minnesota Vikings’ offense. Cook did not provide that as his inconsistent ways doomed the Vikes Sunday evening.

Talk about being an unsung hero. Picked up off waivers from the Buffalo Bills back in November, Hodgins had an impact down the stretch for a Giants team that’s struggled at the wide receiver position. That included putting up eight catches for 89 yards against these Vikings back in Week 16.

Whether it was making an exceptional catch or helping move the chains, the former Oregon State star was at it again Sunday evening. Hodgins hauled in 8-of-9 targets for 105 yards, including a 14-yard score to give the New York Giants a 14-7 first quarter lead.

New York will need much more of this as it prepares to take on the division-rival Philadelphia Eagles in the NFC Divisional Playoffs. That’s for sure.

Cousins completed a resounding 31-of-39 passes for 273 yards with two touchdowns and zero interceptions against the Giants Sunday evening. Typically, that would be an awesome stat line.

This is until we watch the actual tape of the game. Cousins targeted star wide receiver Justin Jefferson nine times in the game. Said targets resulted in just 47 yards. Given how dominant the wide receiver has been throughout his career, that’s just unacceptable.

With Minnesota down 31-24 in the final seconds while facing a fourth-and-8, Cousins threw well short of the first-down market on a pass to tight end T.J. Hockenson. The play had absolutely no chance of working. It was a miserable decision from Cousins. Now 1-4 in his postseason career, one has to wonder whether Cousins is the solution in Minnesota. He came up small once again Sunday evening. 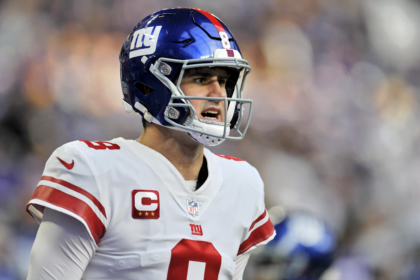 Lastly, this fourth-year quarterback picked the perfect time to play the best football of his career. From pretty much the jump, Jones exposed what has been a weak Vikings defense. That included going for north of 200 total yards in the first half alone, more than he had in seven regular-season games.

Once the second half started, Jones continued to up his game in every possible way. That included leading the Giants on a six-play, 75-yard touchdown-scoring drive to open the third quarter. Said drive culminated in a nine-yard touchdown pass to tight end Daniel Bellinger.

When all was said and done, Jones accounted for 379 total yards and two touchdowns. The New York Giants star also became the first quarterback in NFL Playoff history with 300-plus passing yards, 70-plus rushing yards and two or more touchdowns. That seems pretty good.