The New York Giants weekend and holidays got off to a very scary start on Friday as many of the team’s players were in the building while a fatal shooting occurred at Bloomington, Minnesota’s Mall of America.

Last week, the Giants earned a major victory on the road when they went into Washington and beat the Commanders 20-12 on “Monday Night Football.” The victory was pivotal because it put the team in the driver’s seat when it comes to the Wild Card spots in the NFC. However, things get even tougher on Saturday as they faceoff with the high-flying Minnesota Vikings in another matchup they need to win.

Beating Minnesota in Week 16 will be a tall task for Big Blue since the Vikings riding high after a historic win last week, and are seriously confident as they lead the NFC North and have one of the best offenses in football.

The New York Giants will need a close-to-perfect performance and be mentally locked in for the task at hand. However, that mental focus was fractured on Friday night for many of the team’s players and general manager Joe Schoen.

On Friday night, one Minnesota family was hit with tragedy before the holidays after a 19-year-old man was shot and killed after two groups of men reportedly got into an altercation inside the Mall of America.

The shooting occurred on the first floor of the massive facility and sent the mall into lockdown. On Saturday morning, ESPN NFL insider Tom Pelissero reported that “many” of the Giants players and their GM were inside the building when the shooting occurred.

“I’m told many Giants players were inside the mall, which went on lockdown for about an hour. So was general manager Joe Schoen, who was getting position by position updates from team security until they confirmed everyone was okay.” 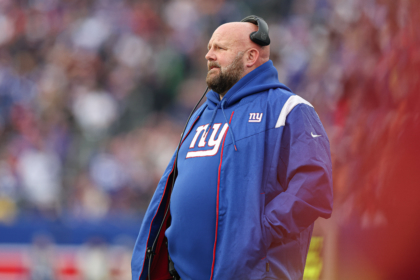 The Giants are staying at a hotel near the Mall of America ahead of their 1 PM ET matchup with the Vikings today. No arrests have yet been made by the Bloomington Police Department following the shooting.