As disappointing as the last several years have been for the New York Giants and their fans, last Thursday’s 30-29 loss to Washington may have been the most heartbreaking.

There were numerous plays that could have sealed victory for Big Blue. But they squandered those opportunities and had some questionable calls go against them. Now they sit at 0-2 for the fifth consecutive season and are in last place in the NFC East.

To make matters worst there seems to be some inner turmoil as Kenny Golladay was seen yelling at offensive coordinator Jason Garrett on the sidelines during the loss to Washington.

Despite the fact that we’re only heading into Week 3 of the NFL season, it seems as if the Giants season is on the brink of falling apart as they head into their game against the (0-2) Atlanta Falcons on Sunday.

A loss to the Falcons could send the New York Giants on a downward spiral that they’ll be unable to recover from. 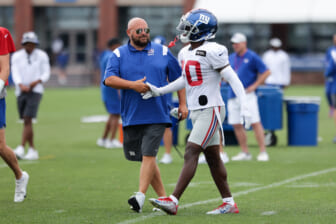 Perhaps Big Blue can get some inspiration from their former quarterback as Eli Manning will have his jersey retired and be inducted into the New York Giants Ring Of Honor.

Manning was the quarterback for New York from 2004-2019 and holds every significant passing record in the franchise’s history. More importantly, he is a two-time Super Bowl MVP having gotten the best out of Tom Brady and the New England Patriots twice on the NFL’s biggest stage in Super Bowl XLII and XLVI.

Manning exemplified what being a Giant is all about both on and off the field as he always carried himself with dignity and class. Even during the downtimes during the final seasons of his career, you never saw him throw a teammate or coach under the bus. When he was benched for Daniel Jones in 2019, he did not cause a distraction or voice his frustration on being benched. Instead, he helped mentor the young Jones to be the best quarterback he could be.

Sunday will be the last time Manning gets honored as a football player until he’s inducted into the Pro Football Hall of Fame. You know this has to be on the minds of current Giants players and especially on the mind of Giants President and CEO John Mara.

Mara has mentioned previously how disappointed he was at how the franchise wasted the last few seasons of Manning’s career.

As bad as Big Blue needs a win on Sunday against the Falcons to avoid starting the season 0-3, you know they want to win on “Eli Manning Day”.

Expect the team to play with added motivation on Sunday as they look to win their first game of the season, and win one for Eli.

He might be retired, but look for Manning to inspire the Giants to victory one more time against the Falcons. 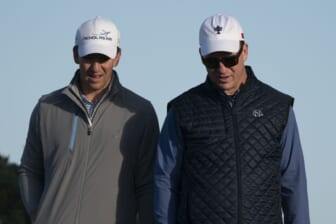