The New Orleans Saints need to make the most of their 2021 NFL Draft picks due to a dire cap situation and the probable retirement of quarterback Drew Brees. 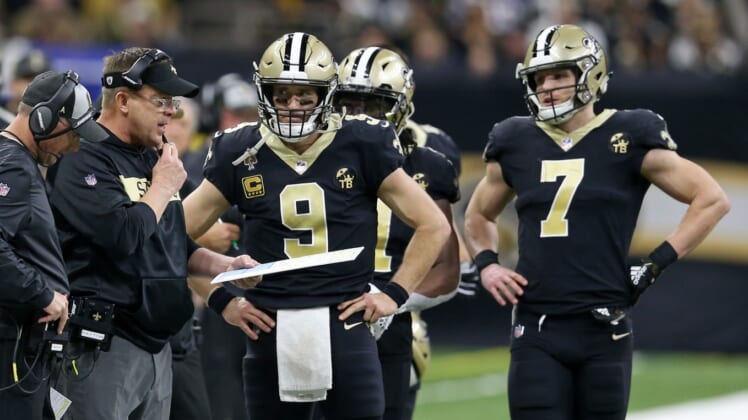 The New Orleans Saints have the worst salary cap situation in the NFL, and legendary quarterback Drew Brees is probably headed for retirement, which means general manager Mickey Loomis and the front office need yet another exceptional rookie class to arrive through the 2021 NFL Draft.

Loomis and Co. have their work cut out to retool a championship-caliber roster, and must still figure out a viable Brees succession plan for at least the upcoming season. Taysom Hill is the only signal-caller slated to be on the roster, as Jameis Winston is hitting free agency.

Although New Orleans’ brass lost Terry Fontenot, who’s now Atlanta’s GM, the team will get an extra third-round pick this year as compensation for his departure.

Will the Saints trade up for one of the top QB prospects, make the most of their top picks as they stand, or try to move back in the order to collect additional picks? Let’s take a look at all the Saints’ highest draft picks and outline an ideal mock draft scenario for them, too, with breakdowns of the top prospects they should target along the way.

Among the key free agents hitting the open market for New Orleans is edge-rusher Trey Hendrickson, whose 13.5 sacks in 2020 probably put him out of the Saints’ price range given their salary cap circumstances.

Cameron Jordan and Marcus Davenport are still on the roster, but there’s still a need not only in terms of pass-rushers but for linebackers as well. Collins knocks out those two needs with one pick — and is a marvel in pass coverage to boot. His pairing alongside Demario Davis is a great way to offset the probable free-agent exit of incumbent ‘backer Alex Anzalone.

Speaking of critical contributors on defense who are in danger of fleeing NOLA, free safety Marcus Williams falls into that category. It’s a pretty strong market at the position this offseason. Again, though, New Orleans can’t afford anyone. Moehrig is therefore a logical replacement in the event Williams isn’t retained.

Melifonwu is more of a forward-looking move, and may be a little too high for some evaluators’ tastes at No. 28 overall. Nevertheless, he’s a long corner with great press skills and enough twitch to get the job done on the outside. Since the Saints will probably have to trade or part ways with other stars, someone like Melifonwu could be insurance in case Marshon Lattimore winds up unexpectedly leaving town.

It’d be interesting to see New Orleans lean on Alvin Kamara and the rushing attack more in 2021, because obviously Kamara is dynamic whether he’s running between the tackles or catching passes out of the backfield at a dizzying rate.

As the Super Bowl LV champion Tampa Bay Buccaneers demonstrated and the Cleveland Browns showed en route to their surprise postseason berth, having formations with two or three tight ends can be a useful way to set up the play-action passing game and keep defenses guessing when there are multiple receiving threats at the position.

With rising sophomore Adam Trautman already in the fold and Jared Cook counting only $2 million against the cap this coming year, the Saints could add to that tight end room in a big way by selecting Jordan. If Hill is in fact the quarterback, he won’t be flexing into the tight end position, and the more friendly, big-bodied athletes Hill can have at his disposal, be it for red-zone passing, stretching the field up the seam or helping out in max protection, it’d give coach Sean Payton’s offense even more of a diverse look.

Hard to ignore Wallace’s steady production for the Cowboys, as he had 3,316 yards receiving and 26 touchdowns as a three-year starter at Oklahoma State. Those prolific numbers aren’t by accident, as Wallace is a crafty downfield target who understands leverage, is competitive at the catch point, and although he won’t wow with athleticism, he just finds a way to get open and get the job done. With a more polished route tree and proper coaching in New Orleans he’d likely be a nice fit.

Finally, we have a scenario where Robinson is on the board, which doesn’t seem terribly likely, but in the event that he is, the UCF standout is a scrappy player who’d be very much a great piece to the puzzle in defensive coordinator Dennis Allen’s aggressive, blitz-heavy scheme.

One thing to note: the pick number is an approximation made by both Pro Football Network and The Draft Network simulations, and the complete draft order is still to be finalized once compensatory picks are fully locked in.

It’s a great stroke of fortune that the Saints do get an extra selection here, though, because they need all the cheap rookie contracts they can get and must nail this pick as well.

Nico Collins is a big-bodied receiver with a massive catch radius who opted out of 2020 and had his production plagued at Michigan by underwhelming quarterback play. He’s a more polished prospect than fellow Wolverine Donovan Peoples-Jones, who was a key contributor to the Browns’ playoff run in 2020 as a sixth-round pick. Collins is a great complementary piece as a prospective No. 2 wideout opposite Michael Thomas.

As for the prospects who should be available around this time, we’ll first examine Williams’ game. While there should be a temptation to address the position earlier than this, the mock scenarios that unfolded presented too many high-end prospects at other positions of need for New Orleans to justify passing on. Landing someone like Williams in the third round is a good compromise.

The Saints already have some versatile defensive backs on the roster, led by a stud cornerback in Lattimore. Williams could well compete for the starting job on the outside opposite Lattimore, or at least develop to do so, as there’s not a ton of depth for that spot as it stands beyond Janoris Jenkins, who’s not quite the cover man he used to be and isn’t getting any younger.

That whole concept touched on earlier about New Orleans deploying more big, three tight end sets on offense? Well, if they want to hold off until Round 3 on that to address other needs, the Saints could scoop up Long with the 98th pick. He’s not near the athlete or receiving threat Miami’s Jordan is. That said, the gritty Boston College blocker would provide pop in pass protection and on perimeter runs, where Kamara seems most dangerous to break off big gains.

Too many teams probably need a linebacker, and it was difficult to get through mock draft simulations without Zaven Collins going off the board, sometimes as high as 18th to the Miami Dolphins, or closer to the mid-20s, with a common fit in Cleveland at No. 26.

Still, having someone like the 6-foot-2 Moehrig is an excellent solution to a potential gaping hole on the Saints’ defensive backfield. Marcus Williams has graded in the top seven among all Pro Football Focus safeties in three of his four NFL seasons, which is probably going to command an eight-figure annual salary.

Prior to creating this Saints draft picks guide, tight end didn’t stand out as a position of dire need. However, to circle back once more to the Browns, they didn’t seem desperate at the position, but in the 2020 draft, saw Harrison Bryant fall to them later than expected, and they took him even with former first-rounder David Njoku and prized free agent Austin Hooper already on the team.

Jordan is a 6-foot-3, 245-pound freakish athlete who’s invaluable in the scoring zone thanks to his knack for high-pointing the ball. He had seven touchdown grabs in eight games for the Hurricanes in 2020. A magnificent play designer like Payton could find all sorts of ways to utilize him, even as a rookie. That makes Jordan, a potential early Day 3 pick, a suitable choice for New Orleans near the end of Day 2.

Lastly, the 6-foot-4 Collins put up 17.8 yards per catch and scored 13 touchdowns on 78 college receptions. Had he been given a greater opportunity to shine, there’s no question his draft stock would be higher. It wouldn’t be a shock to see him fly up scouts’ boards as draft day gets closer, but the fact that he opted out makes him a wild card who could go anywhere from the second to fourth rounds.

Like the subheading says, these are three prospects with a fantastic blend of size and athleticism who could galvanize New Orleans’ pseudo-rebuild in a big way.