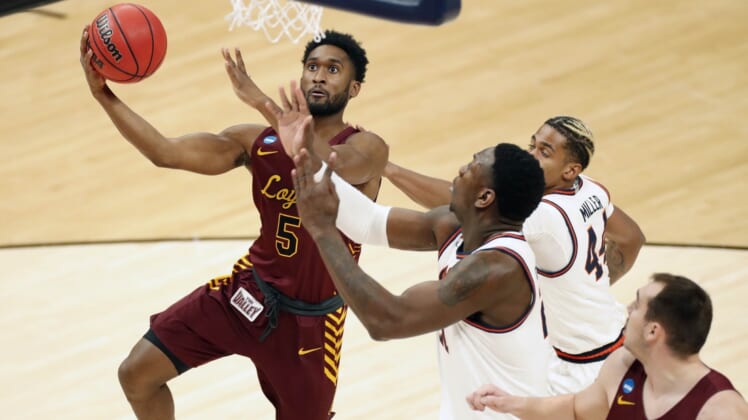 Loyola (Il) Ramblers guard Keith Clemons (5) drives the ball to the hoop as Illinois Fighting Illini center Kofi Cockburn (21) attempts to block him during the second round of the 2021 NCAA Tournament on Sunday, March 21, 2021, at Bankers Life Fieldhouse in Indianapolis, Ind. Mandatory Credit: Michael Caterina/IndyStar via USA TODAY Sports

Eighth-seeded Loyola-Chicago took a large step toward its second Final Four in four years with a 71-58 victory over top-seeded Illinois in a Midwest Region second-round game on Sunday afternoon in Indianapolis.

Not only did the 17th-ranked Ramblers knock out their in-state rival, they did not let the nation’s No. 2 team hold a lead as the country’s best scoring defense stifled the Illini from start to finish. Illinois did not get closer than five points in the final 33 minutes as Loyola swiped the ball 12 times and forced 17 turnovers for the game.

The Ramblers, who have won 19 of their last 20 games, will meet the winner of Sunday night’s game between fourth-seeded Oklahoma State (21-8) and 12th-seeded Oregon State (18-12).

Illinois (24-7), which entered the day with 15 wins in its last 16 games, shot just 44.9 percent from the floor and scored a season-low in points. The Illini failed to earn their first Sweet 16 berth since 2005.

Given the opportunity to play the state’s flagship school for the first time in 10 years, Loyola seized the chance from the start.

Krutwig flipped a 10-footer over Cockburn on Loyola’s first possession, then ran a give-and-go with Keith Clemons for an alley-oop layup the next time down the floor to give the Ramblers the lead for good.

Loyola’s aggressive defense thwarted Illinois all game with a variety of looks out of its trademark man-to-man. The Ramblers switched and double-teamed all over the floor in order to force the ball out of the hands of Dosunmu and Cockburn.

Cockburn didn’t earn his first basket until he dunked at the 8:55 mark of the first half, which pulled Illinois within 19-11.

The Ramblers’ perpetual lead swelled to 33-19 on Clemons’ 3-pointer with 1:17 to go, but Illinois headed into the locker room with momentum as Curbelo fed Cockburn for a dunk that became a 3-point play – then Curbelo floated a pass to Cockburn for an alley-oop jam in the waning seconds to cut the margin to 33-24 at the break.

Illinois pulled within six points on multiple occasions early in the second half, but Loyola responded every time. Down the stretch, Krutwig twice swiped the ball out of Dosunmu’s hands as the help guy on the double team.