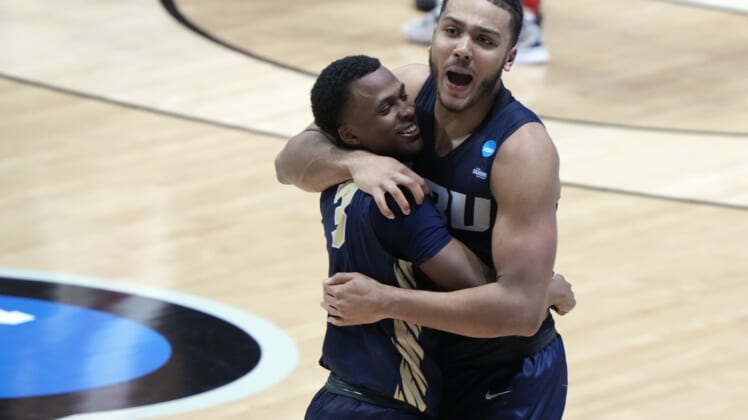 Obanor had seven of his 30 points in overtime for the Golden Eagles (17-10) while Abmas, the nation’s leading scorer at 24.2 points per game, had 29 in the shocker. Oral Roberts advanced to face seventh-seeded Florida on Sunday.

Oral Roberts was the first No. 15 seed to win since 2016 (Middle Tennessee over Michigan State). It was the program’s first NCAA Tournament victory since 1974.

MaCio Teague pumped in 22 points as the top-seeded Bears began their quest for a national title with a trouncing of the 16th-seeded Hawks in Indianapolis.

Austin Williams racked up 19 points and Traci Carter had 11 points for Hartford (15-9), which made its NCAA Tournament debut after winning the America East tournament. The Hawks committed 24 turnovers.

Justin Smith had a career-high 29 points to go with 13 rebounds as the third-seeded Razorbacks overcame a 14-point first-half deficit to hold off the 14th-seeded Raiders in Indianapolis.

Jalen Tate added 15 points, JD Notae scored 14 and Moses Moody and Davonte Davis had 12 each as the Razorbacks (23-6) advanced to face sixth-seeded Texas Tech on Sunday.

Nelly Cummings scored 14, Jordan Burns added 13 and Jack Ferguson and Jeff Woodward had 11 each to lead the Raiders (14-2), who saw their 13-game winning streak end.

Javion Hamlet had 24 points and 11 rebounds and the Mean Green earned their first NCAA Tournament victory, upsetting the Boilermakers in overtime at Indianapolis.

Thomas Bell and Mardrez McBride added 16 apiece for the Mean Green (18-9), who will face fifth-seeded Villanova in the second round Sunday. James Reese also had 13 for North Texas, which won four games in four days in the Conference USA tournament to earn its first NCAA berth since 2010.

Jaden Ivey led Purdue (18-10) with 26 points. Trevion Williams added 14 points and 13 rebounds for his 11th double-double of the season.

Jeremiah Robinson-Earl had 22 points, 12 rebounds and three blocked shots to lift the Wildcats past the Eagles in Indianapolis.

Justin Moore added 15 points, Jermaine Samuels chipped in with 11 while Caleb Daniels had 10 for Villanova (17-6).

The Red Raiders forced 22 turnovers and smothered the Aggies in the second half to advance in Bloomington, Ind.

Justin Bean paced Utah State (20-9) with 13 points but scored only three in the second half. Marco Anthony and Neemias Queta added 11 each, and Queta was a force in the paint with 13 rebounds and seven blocked shots.

Colin Castleton had 19 points and 14 rebounds to help the Gators rally in regulation and later hang on for an overtime victory over the Hokies in Indianapolis.

But Tre Mann’s clutch 3-pointer with 22.9 seconds left in the extra period helped the Gators (15-9) pull away for good. Scottie Lewis, who finished with 15 points and four assists off Florida’s bench, followed with a pair of free throws. Mann’s streak of four consecutive games with 20 or more points was halted. He finished with 14 and four assists.

Brad Davison poured in 29 points with a sterling shooting performance as the Badgers overwhelmed the Tar Heels in West Lafayette, Ind.

D’Mitrik Trice added 21 points for the Badgers (18-12), who held a double-digit lead for the entire second half.

Kofi Cockburn scored a game-high 18 points in just 20 minutes as the Fighting Illini pulled away from the Dragons in Indianapolis.

National player of the year candidate Ayo Dosunmu added 17 points, 11 rebounds, five assists and three steals for Illinois (24-6), which will play eighth-seeded Loyola on Sunday in the second round.

Quentin Grimes scored 18 points and Tramon Mark added 15 as the Cougars rolled to an easy win over the Vikings in Bloomington, Ind.

The Cougars (25-3) advance to play 10th-seeded Rutgers on Sunday in the second round. Houston extended its winning streak to eight games, confirming a reputation of stifling defense and assertive rebounding, particularly on the offensive end.

Houston cruised despite losing senior guard DeJon Jarreau, the American Athletic Conference Defensive Player of the Year, to a right hip injury in the first minute of the game. D’Moi Hodge led Cleveland State (19-8) with 11 points.

Miles McBride scored 30 points as the Mountaineers pulled away in the second half for a victory over the Eagles in Indianapolis.

McBride made 11 of 17 shots while also contributing six rebounds and six assists, with no turnovers. Jalen Bridges added 15 points and West Virginia coach Bob Huggins earned his 900th career victory. The Mountaineers (19-9) will play 11th-seeded Syracuse in the second round Sunday.

Morehead State, which won the Ohio Valley Conference tournament to reach the NCAA Tournament for the first time since 2011, finished at 23-8. DeVon Cooper scored 21 to lead the Eagles, making 5 of 8 3-point attempts.

Avery Anderson III scored a game-high 21 points as the Cowboys overcame a poor shooting night from freshman sensation Cade Cunningham to defeat the Flames at Indianapolis.

Cunningham, the Big 12 Conference player of the year and the probable No. 1 overall pick in the next NBA draft, was limited to 15 points on 3-for-14 shooting from the field and committed a team-high four turnovers.

Roman Silva scored a career-high 16 points, making all eight of his field-goal attempts, as the Beavers upset the Volunteers in Indianapolis, winning a tournament game for the first time since 1982.

Buddy Boeheim poured in 30 points, the Orange’s 2-3 zone was dominant and Syracuse roared past the Aztecs in Indianapolis. Boeheim single-handedly kept Syracuse in the game early, scoring 16 consecutive points for his team, before others chipped in during a 20-0 run that spanned halftime.

Jordan Schakel and Matt Mitchell, the Mountain West Player of the Year, each scored 17 to lead San Diego State. Mitchell was 1 of 9 from 3-point range.

Geo Baker, Caleb McConnell and Jacob Young each scored 13 points to lead the Scarlet Knights past the Tigers in Indianapolis.

Lucas Williamson scored a game-high 21 points to lead the Ramblers past the Yellow Jackets in Indianapolis.

Jordan Usher scored 15 points to pace the Yellow Jackets (16-10), while Michael Devoe added 14 and Jose Alvarado hit for 13 points. Georgia Tech canned 57.4 percent of its field-goal attempts, but couldn’t make up for the absence of Atlantic Coast Conference Player of the Year Moses Wright, who sat out due to COVID-19 protocols.