On Sunday night, the Cleveland Cavaliers pulled off a major upset by defeating the Golden State Warriors at Oracle Arena in Oakland to even up the NBA Finals at one.

It goes without saying that Cleveland’s dramatic win puts the team in prime position to take a stranglehold on the series at home in Game 3 on Tuesday night. More than avoiding the hell that would have been a 2-0 series deficit, Cleveland took home-court away from the Western Conference champs.

Now heading into Game 3, both teams have to be feeling the pressure here.

According to a chart by ESPN, Golden State’s chances of winning the series stood at 81 percent following its Game 1 victory. Those chances took a nosedive to 61 percent after its brutal Game 2 performance.

However, if the Warriors find a way to rebound and win Game 3 in Cleveland, their odds go up to 81 percent (h/t Business Insider): 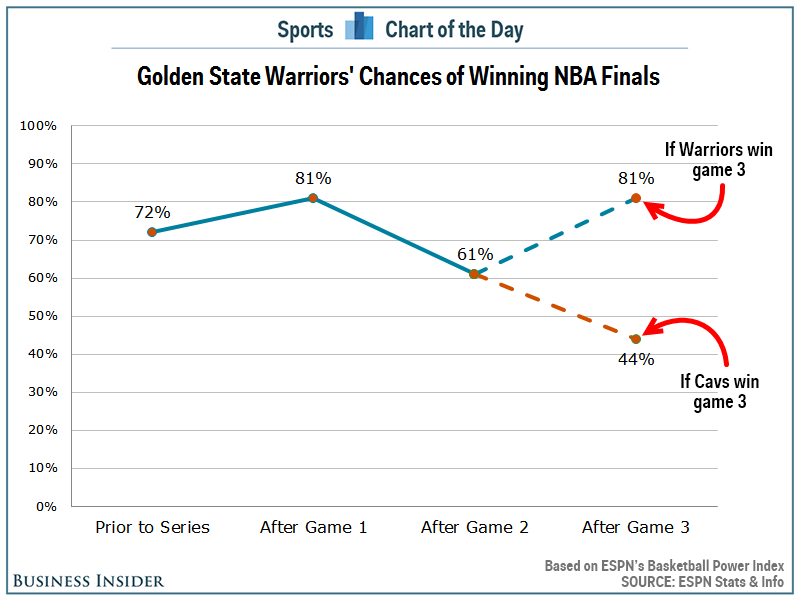 Not only would the Warriors have taken a 2-1 series lead in that scenario, they would have regained home-court advantage. Even after Sunday’s loss, Steve Kerr’s squad is a remarkable 47-4 at home this year, postseason included.

However, if the Cavaliers are able to pull off the win at home in Game 3, their odds go up to 56 percent to win the series. It also means that the Eastern Conference champs could win the series without having to pull off another victory in Oakland.

Heading into Game 3, the Warriors find themselves as one-point underdogs. They are going to have to dig deep to fend off the Cavaliers in what promises to be a hostile environment at Quicken Loans Arena Tuesday night.