NBA Finals: Draymond Green has been a liability for Warriors versus Celtics 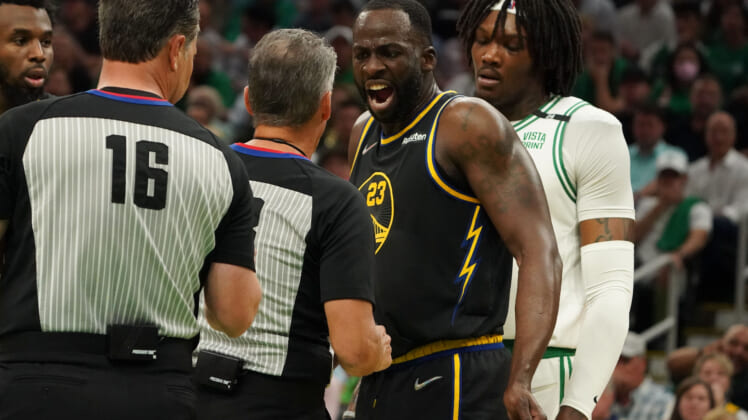 Draymond Green has been a major factor in the Golden State Warriors’ championship seasons over the last decade. However, in the 2022 NBA Finals, he has hurt his team far more than he has helped.

Green will go down as one of the greatest players in Warriors history after a 10-year career that includes four All-Star appearances and three NBA titles. There is even an argument that Green’s suspension for Game 5 of the 2016 NBA Finals led to the Warriors’ blowing a 3-1 lead, and falling epically to the Cleveland Cavaliers in that year’s championship series.

Despite averaging 8.7 points per game and 6.9 rebounds during his career, Green is the ultimate intangibles player and will likely end up in the league’s Hall-of-Fame despite numbers that resemble a solid bench contributor in most NBA rotations.

However, even with his performance Sunday in Game 2 where he seemed to rattle some of the Boston Celtics’ best players, and galvanize the Golden State faithful in their victory to tie the series at 1-1, over three games Green has been a bigger hindrance than help in the 2022 Finals.

The NBA world is well aware that Draymond Green has not made a name for himself by being an offensive force. And he hasn’t had to during a career where he’s played with some of the best scorers of the last 20 years in Stephen Curry, Klay Thompson, and Kevin Durant. But that doesn’t mean he did not contribute to the team making five NBA Finals appearances before this season.

Over the Warriors five playoff runs from 2015 to 2019, Green nearly averaged points and rebounds double-doubles every year. Hitting a scoring peak of 15.4 per game in 2016 and his best assists average of 8.5 in 2019. Sure, he wasn’t their best player but he was still a notable offensive contributor. 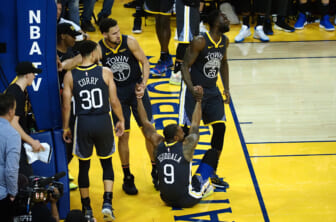 However, in 2022 he is having his worst statistical playoff run since his rookie season. In 19 games over the last two months, Green is averaging just 8.1 points, 6.9 rebounds, and 6.1 assists. His points and rebounds are the worst of his career outside of his first playoffs in 2012-2013 when he averaged only 18.6 minutes a game.

In the 2022 NBA Finals, he has played even worse. In three games he has a total of 15 points, is 0-7 from three-point range, has missed half of his 10 free throws, and is shooting 26% from the field. He currently has more turnovers than made baskets (via StatMuse). We all know Green isn’t great offensively but that is pretty horrid in the biggest games of the season.

Green’s supporters would argue the offensive numbers don’t matter because he is there to play big-time defense and be an absolute pest on game night. And a pest he certainly was in frustrating players like Jaylen Brown during the Warriors’ 107-88 victory. However, that is where the benefits of Draymond Green on the defensive side of things end.

On Thursday, Second Spectrum revealed a fascinating stat that was reported by The Ringer’s NBA contributor Kevin O’Conner. Over the first few games of this year’s championship series, Green is allowing 1.24 points per play when he is the direct defender. Which is the worst number for him in any playoff series since 2013-14 (the second year of his career). 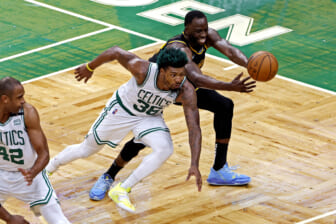 While the Celtics have some talented scorers in Jayson Tatum and Brown, they are in this championship dance because of their defense and are not quite as electric as Lebron James or Kawhi Leonard. Two players Green guarded in previous finals. If Green is not offering up the same sort of on-the-ball defense he has in past seasons, he is not nearly as influential on the game as he needs to be. Especially with his putrid offensive stats.

With the team now down 2-1 in their best-of-seven series after their loss on Wednesday, head coach Steve Kerr may need to ponder the idea of limiting Green’s minutes and giving much more front-court time to the likes of Kevon Looney and Jonathan Kuminga going forward.