After a close first half, the Golden State Warriors pulled away in the third quarter to defeat the Boston Celtics in Game 2 of the 2022 NBA Finals Sunday evening.

Golden State’s defense came to play in the second half, holding the Celtics to 38 points. That included a 14-point third quarter, which pretty much ended the game.

Boston struggled with turnovers throughout Game 2 of the Finals in San Francisco. Stephen Curry played elite ball in just three quarters. Meanwhile, Jayson Tatum came up empty in the second half.

Below, we look at five takeaways from the Golden State Warriors’ 107-88 win over the Boston Celtics to even the series up at one heading into Game 3 Wednesday evening.

Boston had it going in the first quarter with stars Jayson Tatum and Jaylen Brown combining for 26 points. Unfortunately, the team also trailed at the end of 12 by the score of 31-30. Why? The Celtics turned the ball over seven times — resulting in 13 points for the Warriors. This came after Boston had 12 giveaways in all of Game 1.

It set the tone for the remainder of the game, including a third quarter that saw Golden State outscore Boston by the margin of 35-14. All said, the Celtics had 18 turnovers compared to 24 assists. This is not going to cut it against a Warriors squad that can score in bunches.

Klay Thompson’s struggles are concerning for the Golden State Warriors

It’s becoming increasingly clear that Thompson is not back to his pre-injury self. Since his return in January, struggles on the defensive end of the court were obvious. With that said, Thompson was able to put up the performances we saw before he suffered a torn ACL in the 2019 NBA Finals and a torn Achilles ahead of the 2020-21 season.

Unfortunately, Thompson is now struggling big time shooting the ball. If he’s not a threat, the veteran guard provides very little to help the Warriors. That was the case in Game 2 of the NBA Finals. He opened the game shooting 1-of-7 before hitting a couple in the third quarter.

This was not enough for Thompson to break out of his funk. He was downright terrible on both ends. That included shooting 4-of-19 from the field. In a game that the Warriors won by 19, Thompson finished even in 30 minutes. That’s not going to cut it. 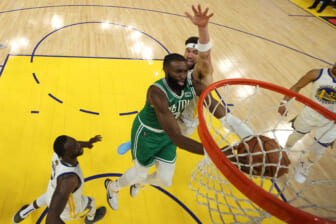 Stephen Curry got it going on offense, scoring 29 points despite sitting out the entire fourth quarter. The Warriors connected on 41% of their shots from three-point range. That adds up to some less-than-stellar defense for Boston.

And as for Smart, he shot 1-of-6 from the field while scoring two points and turning the ball over five times. That’s just ugly. Smart was one of three Boston starters to score two points. That’s even uglier.

You read that right. Curry might have scored 29 points on 5-of-12 from distance. He went complete lights out in the third quarter as Golden State put this one away. Even then, Curry’s defense was the biggest story in this one. He took on Al Horford in the low-post and guarded Boston’s wings out on the perimeter. It was something to see.

With the defensive capabilities that the likes of Draymond Green, Andrew Wiggins and Gary Payton II have, Curry’s performance on that end of the court could loom large moving forward. It helped hold Boston to 38% shooting from the field with 18 turnovers.

Tatum dropped 21 points in the first half. For at least 24 minutes, he proved that his Game 1 performance was behind the forward. This not continue in the second half with Tatum dropping just seven points. From there, Tatum’s Game 2 outing left a whole lot to be desired for Boston.

In addition to this, Boston finished minus-36 in the 34 minutes that Tatum played. Sure the Warriors’ defense came to play big time. Even then, this dude needs to step up heading back to Boston. If not, these Celtics will give away home-court just as fast as they took it.

Draymond Green sets the tone for the Golden State Warriors

There was a lot of talk about Green’s performance in the series opener heading into Game 2. The three-time NBA champion scored four points on 2-of-12 shooting. He did not have the defensive intensity we’ve seen throughout Green’s career.

That changed big time on Sunday evening. Green picked up an early technical and almost received a second one. Then, he calmed down and played flawless ball on both ends of the court. That is to say, tremendous defense and leading things on offense. The future Hall of Famer scored nine points while grabbing five rebounds and dishing out seven assists. More than that, he’s one of the primary reasons that both Tatum and Jaylen Brown (combined 13-of-36 shooting) struggled for Boston.