NBA Finals: Celtics vs Warriors gets lowest Game 1 rating in June since 2007

Despite featuring popular teams from two of the biggest sports market in the country, Game 1 of the 2022 NBA Finals between the Boston Celtics and Golden State Warriors were the lowest in 15 years.

For consecutive seasons, the NBA Finals were bumped from their normal time of year in June due to the effects of the ongoing COVID-19 pandemic. Well, with the pre-summer tradition back where it belongs, the early numbers for the league did not deliver as they have in years past.

Preliminary numbers for Game 1 of the Celtics vs Warriors on Thursday night had a 6.4 rating and 11.9 million viewers on average watched the game-related broadcasts on ABC and ESPN2 [via Sports Media Watch]. While those early numbers were better than the 2020 and 2021 Finals openers — which took place mostly in October and July of those years — they are the worst Game 1 numbers since Cavaliers vs Warriors in 2007.

Related: NBA games today – Watch times and odds for the next Finals matchup

The preliminary figures do not include out-of-home views and could certainly lead to some adjustments when final numbers are released on Monday. However, assuming they mostly hold, the Celtics’ 120-108 victory saw a 19% drop in ratings and 11% decline in viewership compared to the 2019 NBA Finals featuring the Warriors against the Toronto Raptors. Which was also the last championship series to take place in June.

There were some positive signs in the night’s numbers, however. Compared to Game 1 of last year’s Finals in July, ratings were actually up 42% and as much as 39% in viewership. Numbers were also better than the opener two years ago on the last day of September with a 56% rating improvement and a viewership increase of 57%. 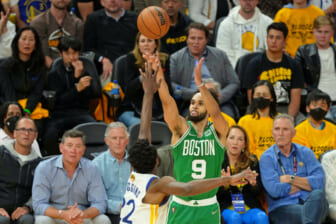 Golden State legend and favorite to win the 2022 NBA Final MVP award, Stephen Curry, has competed in many championship games over the last decade — 29 to be exact. However, Thursday’s game was the lowest-rated Finals game featuring the superstar scorer. The two-time MVP finished with a game-high 34 points and had a blistering and glorious first-half showing.