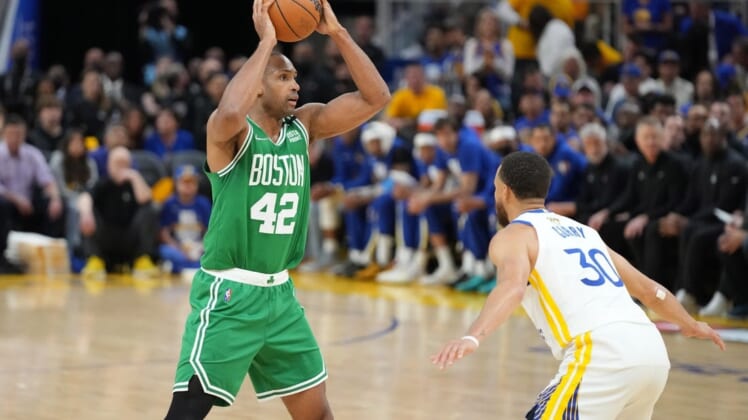 Jaylen Brown saved 10 of his 24 points for a fourth-quarter flurry and the Boston Celtics continued their postseason mastery on the road with a 120-108 victory over the Golden State Warriors in Game 1 of the NBA Finals in San Francisco on Thursday.

Al Horford led a balanced attack with 26 points and Derrick White had 21 off the bench for the Celtics. Boston will attempt to go up 2-0 in the best-of-seven series Sunday with another game on the Warriors’ court, where the Western Conference champs had been 9-0 entering the Finals.

In winning for the eighth time in 10 road games in the playoffs, the Celtics trailed 92-80 before opening the fourth quarter with a 9-0 burst that quickly closed the gap to three. Brown had 2- and 3-point hoops to ignite the run.

Golden State’s Andre Iguodala temporarily stalled the avalanche with a dunk, but White and Horford then buried a pair of 3-pointers while Brown and Payton Pritchard added one each in a 20-9 spurt that put Boston in charge for good at 109-103 with 4:49 to go.

The Celtics made nine 3-pointers in all in the final period, outscoring Golden State 40-16 over the final 12 minutes to win going away.

Smart finished with 18 points as the Celtics, champions of the Eastern Conference, won despite an off night from star Jayson Tatum, who shot just 3-for-17 and totaled 12 points.

Stephen Curry had a game-high 34 points and Andrew Wiggins 20 for the Warriors, who led for most of the first 43 minutes. A majority of Curry’s points came on 7-for-14 shooting from beyond the arc.

Klay Thompson added 15 points and Otto Porter Jr. 12 for the Warriors, who are making their sixth Finals appearance in the past eight years.

The Celtics survived a 21-point Curry explosion in the first quarter to take a 56-54 lead at halftime.

Curry set a Finals record for a quarter with six 3-pointers on eight tries in the first period. However, he went scoreless in the second quarter, missing his only attempt from beyond the arc.