The Boston Celtics stole home-court advantage from the Golden State Warriors in Game 1 of the NBA Finals on Thursday.

Boston was down 12 points at the half before outscoring the home team 40-16 in the fourth quarter. It left the Warriors and their fans stunned inside San Francisco’s Chase Center.

Jaylen Brown and Derrick White did their thing in the fourth quarter as Jayson Tatum struggled shooting the ball. As for Golden State, this stage proved to be too big for young guard Jordan Poole.

Here, we give you our biggest winners and losers from the Boston Celtics’ surprising 120-108 win over the Golden State Warriors in Game 1 of the 2022 NBA Finals.

With Boston down 12 heading into the four quarter of Game 1, the team needed a spark in a big way. Jayson Tatum was not providing it. Instead, Brown did his thing as the Celtics went on an absolutely huge run in the final stanza.

Brown scored 10 of the Celtics’ 31 points during that 31-11 run to open the fourth quarter. He hit on all four of his shots during that span. It’s insane to think about. A game with four three-time champions saw the CAL product stepp up when the Eastern Conference champs needed it the most. 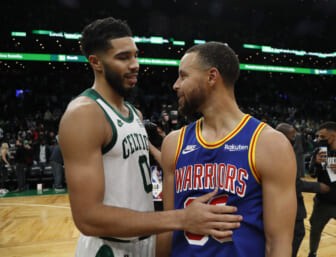 Loser: NBA Finals too big of a stage for Jordan Poole

Warriors general manager Bob Myers discussed it ahead of the NBA Finals. The possibility that Golden State might offer the 22-year-old Poole a lucrative long-term contract during the summer. He has performed at a high level during the playoffs and looks to be a major part of the future in San Francisco.

That was not the case in Game 1 of the NBA Finals with Poole looking to be in way over his head.

This is about as bad of a performance that a player with Poole’s talent can put up on the game’s biggest stage. One now has to wonder where he goes from here. Golden State will need him to step up if it is going to rebound from a disastrous Game 1 performance.

This dude was on absolute fire to open Game 1 of the NBA Finals. How crazy was Steph? He scored 21 points on 7-of-9 shooting in the first quarter alone. That included nailing an NBA Finals record six three-pointers in a quarter.

Curry finished the game with 34 points on 12-of-25 shooting. He added five rebounds and five assists. Unfortunately for the all-time great guard, he didn’t get any help from the rest of his teamamates with Andrew Wiggins scoring 20 points as the second-leading scorer. 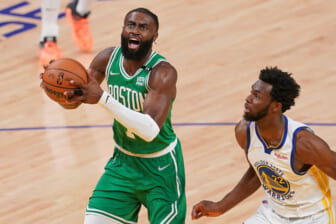 Loser: Jayson Tatum will need to step up for Boston Celtics to win

Tatum had 13 assists and the Celtics finished plus-16 in his 42 minutes of action. Those are the good splits for the NBA Finals MVP candidate. With that said, the Celtics can’t rely on players not named Jayson Tatum to connect on 20-of-36 from three-point range. That’s just not going to happen moving forward.

Tatum shot 3-of-17 from the field. He just wasn’t hitting his shots. It’s that simple. We know the Warriors’ supporting cast will step up when it counts with them up against it in Game 2. Can Tatum turn in one of his signature scoring performances that has defined Boston’s playoff run?

Celtics head coach Ime Udoka knew what he had in White when Boston dealt for him at the NBA trade deadline. The two worked together when Udoka was Gregg Popovich’s assistant with the San Antonio Spurs. That’s why he showed he can trust the 27-year-old guard.

White had not performed at a high level heading into, shooting a mere 38% from the field through the first 17 playoff games. He changed that in a big way during Game 1 of the Finals. White scored 21 points on 6-of-11 shooting. He hit on 5-of-8 from distance, too. It led to the Celtics finishing plus-25 in his 32 minutes of action with them being outscored by 13 in the 16 minutes he didn’t play.

We know that Draymond Green is not going to be a volume scorer for the Golden State Warriors. He averaged 7.5 points during the regular season and headed into Game 1 of the NBA Finals averaging 8.7 points thus far in the postseason.

With that said, Green has proven that he can be an effective scorer when called on (54% shooting in the playoffs). That did not come to fruition in Game 1. Green shot 2-of-12 from the field. He also missed on all four of his three-point attempts. These shots take opportunities away from Stephen Curry, Klay Thompson and Andrew Wiggins. He simply needs to look to distribute more moving forward (five assists in Game 1).