Jordan Poole and his Golden State Warriors open Game 1 of the 2022 NBA Finals at home against the Boston Celtics Thursday evening.

Poole, 22, is in the midst of a breakout season that has seen him morph from G-League player to one of the most-talented young guards in the NBA.

It’s one of the primary reasons Golden State is entering its sixth NBA Finals in eight years after a two-year hiatus.

The backdrop here is Poole’s contract standing. The former first-round pick from Michigan is slated to hit restricted free agency following the 2022-23 season. For a Warriors team that’s currently roughly $40 million over the NBA luxury tax, it will be an expensive proposition to re-sign him. As such, there’s been talk about a potential extension this summer before he hits free agency.

Warriors general manager Bob Myers touched on that recently, coming very close to guaranteeing that the team’s ownership will do whatever is possible to retain Poole long term.

“You don’t need me to tell you what our payroll is. It’s pretty high. So he just wants to win. And we’ve spent a lot and we’ve kept all the players we want to keep, so I don’t see that changing.”

At issue here for Golden State is the fact that Andrew Wiggins is also slated to hit free agency following the 2022-23 season. He’s also played himself into a long-term contract whether it’s with Golden State or another team. Signing Poole to an extension this summer would help matters regardless of whether the Warriors trade Wiggins.

Related: Jordan Poole and the top-10 players of the 2022 NBA Finals

If you were to ask us 18 months ago, the thought of Poole receiving anything close to a rookie-level max contract would have been asinine. The guard averaged 8.8 points on 33% shooting as a rookie in 2019-20. He split time between the G-League and the NBA team, too.

Since then, it’s been an ascension to stardom on the part of the young guard. He averaged 12.0 points on 35% shooting as a sophomore last season and picked it up even more during the 2021-22 regular season.

The moral of the story? There’s a chance that Poole has played himself into a five-year, $190 million max extension. It’s the same deal fellow 2019 classmates Zion Williamson and Ja Morant will likely sign this summer. 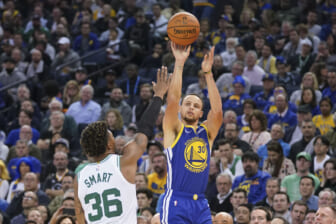 As a repeat offender, the Warriors’ tax bill will be equal to whatever they end up paying Poole. This means $38 million annually for the young star would really be $76 million per year because of the salary cap tax.

As it stands, the Warriors’ 2022 payroll is absolutely ridiculous.

If you add Poole’s salary on a max extension, the Warriors would be roughly $6 million under the cap when taking into account just five players. That’s insane.

Then again, Golden State’s ownership group has in the past said it’s willing to spend to keep this thing going. It is also going to earn north of $100 million in revenue from the 2022 NBA Playoffs and Finals alone. Joe Lacob and co-owner Peter Guber can’t cry poor.