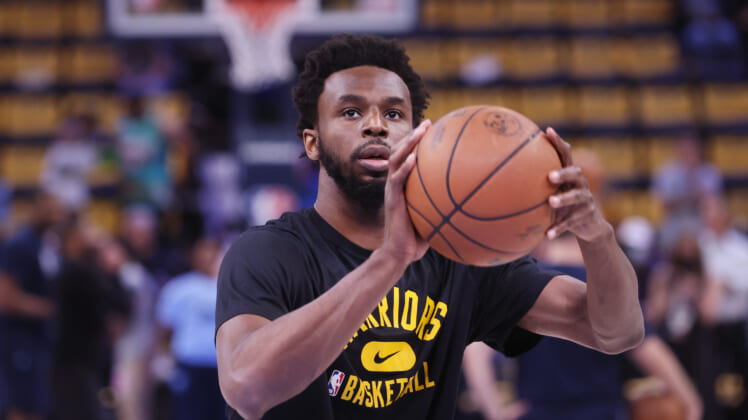 The Golden State Warriors have managed to come out ahead in the Andrew Wiggins trade, turning his reputation around since becoming a member of the team in the middle of the 2019-20 season. Proving himself as a valued two-way player on a playoff squad, the Warriors now face the problem of having too much talent, and not being able to afford extensions for their young talent.

When looking at the core of Stephen Curry, Klay Thompson, Draymond Green, and Jordan Poole plus Wiggins, the latter appears to be the most expendable of the quintet.

With Curry and Thompson on max contracts and Poole in line to receive an extension that could be in the $25 million per year range, Wiggins and his max deal might have to go.

Now that he’s coming off an All-Star season, heading into the last year of his contract, the Warriors should receive strong value for the 27-year-old forward.

Here are three ideal Andrew Wiggins trade scenarios for the Warriors this offseason.

There isn’t a single player on the Toronto Raptors’ roster who is listed as taller than 6-foot-9. Aside from Fred VanVleet, most of their core ranges from 6-foot-5 to 6-foot-9. Adding the 7-foot tall James Wiseman would add some serious size to their starting lineup.

Raptors fans may not be thrilled with the idea of losing perhaps their best player in Spicy P, but in return, they land the Toronto native in Wiggins who can replace Siakam’s scoring and Wiseman who still has the potential to be one of the best bigs in basketball once he returns to health.

The Raptors already have a solid squad, and this trade allows Scottie Barnes to assume a bigger role while balancing the roster as a whole.

Meanwhile, the Warriors don’t have to keep waiting for Wiseman to develop, instead adding a different skill set who can play the five next to Draymond Green.

If the Warriors are targeting a big with a potential Andrew Wiggins trade, landing someone like Steven Adams could be a perfect fit. It’s likely Adams would take a back seat to Wiseman, allowing the team to go all-in on the No. 2 overall pick from the 2020 NBA Draft.

Worst-case scenario if Wiseman doesn’t pan out, they still have Adams who’s a reliable source for blocks in rebounds while clogging the paint.

This trade saves the Warriors $4.2 million right away next season and both Adams and Brooks are on expiring contracts, which allows them to possibly trade them at the deadline as they see how their young players such as Moses Moody, Jonathan Kuminga, and Wiseman are doing halfway through the year.

Brooks offers a poor-mans version of Wiggins, bringing scoring and some defense, yet with added intensity to his game. One potential roadblock is having to pay Brooks in the following season when they’re also trying to extend Jordan Poole. But it’s not as big of a worry as trying to fit Wiggins under their cap too.

For the Grizzlies, they part ways with Adams who’s a fading part of their rotation. Losing Brooks is not ideal as he’s become a major part of their team, but Wiggins is a much better shooter (.543 eFG% compared to .475 eFG%) and defender while having a lower usage rate than Brooks.

Having another All-Star caliber 3-and-D player to pair with Morant and Bane could be what helps put them over the top.

The Utah Jazz may be one of the best trade partners if the Warriors are serious about moving Wiggins, but it only works if they’re ready to part ways with Rudy Gobert. In that sense, the Warriors may have the perfect replacement with Wiseman who brings plenty of defensive upside in his own right.

It’s a big gamble, aiming for a player who’s played just 39 games in the past two seasons, but if Wiseman can make it through a full season, there’s a good chance he proves to be one of the best rim protectors in the NBA.

This trade gives Donovan Mitchell another top-scoring option to help take the focus off him while adding a versatile defender who isn’t afraid to take on the opponent’s best scorer on a nightly basis. If time has run its course on the Mitchell-Gobert pairing, coming away with an All-Star wing in addition to a big who doesn’t have any beef with the team’s face of the franchise might be the best trade available for the Jazz.

For the Warriors, they add one of the best defensive players in basketball to anchor their paint. It doesn’t help their future cap scenario at all, but having a chance to pair a three-time Defensive Player of the Year with possibly the best offensive player of all time doesn’t come around often. If Gobert is available, the Warriors shouldn’t hesitate to make this offer, even if it means adding in another asset or two to make it happen.