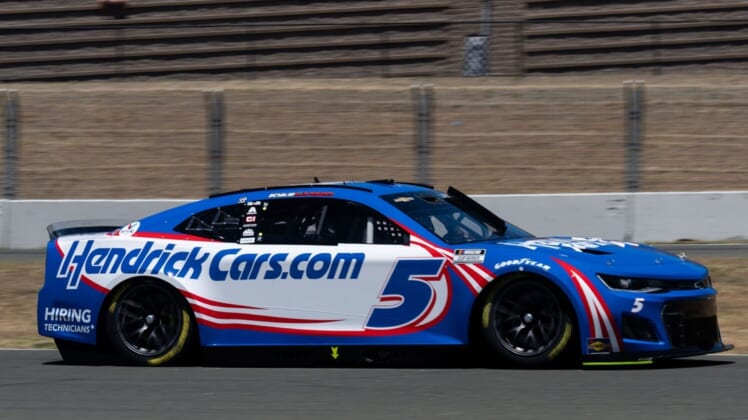 Larson earned his fourth career NASCAR Cup Series pole position at the 1.99-mile Northern California road course on Saturday afternoon with a blistering lap of 91.935 mph in the No. 5 Hendrick Motorsports Chevrolet. He was fastest in practice and both rounds of qualifying to definitively earn “favorite” status for tomorrow’s race.

And even after qualifying, Larson said, he hadn’t even shown all the speed his car was capable of — rough news for the field.

“It was good, and I was a bit surprised, because I felt like I gave up a lot of time in Turns 4 and 7, so had I had those two corners back, I felt like I could have went quite a bit faster,” said the Elk Grove, California, native, who has now won four pole positions at his “home track.”

“Thanks to everyone on our team,” he said. “Excited about it.”

Joining Larson on the front row is NASCAR’s reigning road course master and Larson’s Hendrick Motorsports teammate, Chase Elliott, who among active drivers has a series-best seven road course wins but is still looking for his first victory at Sonoma Raceway.

RFK Racing driver Chris Buescher and Front Row Motorsport’s driver Michael McDowell turned in an inspired qualifying effort and will comprise the second row on the grid. It’s the best start of the season for the 2021 Daytona 500 winner McDowell, who is an accomplished road racer.

Richard Childress Racing driver Tyler Reddick and Stewart-Haas Racing’s Cole Custer will start from the third row, followed by Trackhouse Racing teammates Ross Chastain and Daniel Suarez. Team Penske’s Joey Logano and Joe Gibbs Racing’s Denny Hamlin — driving the lone Toyota in the final round of qualifying — will round out the top 10.

Larson is the only driver among the top 10 with a previous win at the track.

Three-time Sonoma winner Martin Truex Jr., the winningest active driver at the track, will roll off 28th in the No. 19 Joe Gibbs Racing Toyota. His former championship-winning crew chief, Cole Pearn, is working as an engineer this week for the No. 19 team.

His teammate, the only other active multi-time winner at Sonoma, two-time winner Kyle Busch just missed advancing to the final round of qualifying. He will start the No. 18 JGR Toyota in 11th place, right alongside his older brother Kurt Busch in the No. 45 23XI Racing Toyota. Kurt is a former winner at Sonoma as well.

NASCAR’s road course ace A.J. Allmendinger will start 16th in the No. 16 Kaulig Racing Chevrolet. Renowned sports car racer Joey Hand qualified the No. 15 Rick Ware Racing Ford in 17th in his second NASCAR Cup Series start of the season. Todd Gilliland was the fastest rookie and will start the No. 38 Front Row Motorsports Ford, 24th.

CHASTAIN REACHES OUT TO COMPETITORS

Trackhouse Racing’s driver Ross Chastain, who won the NASCAR Cup Series’ first road course race of the 2022 season at Austin, Texas, in March, said he spent time this week reaching out to a pair of drivers he had run-ins with last week at World Wide Technology Raceway at Gateway. The driver of the No. 1 Trackhouse Racing Chevrolet had some contact with both Joe Gibbs Racing’s Denny Hamlin and Hendrick Motorsport’s Chase Elliott in the race.

And in return, both those drivers — whose cars were essentially rendered non-competitive after the Chastain incidents — kept him on his toes in the closing laps thereafter. Their frustration was unmistakable, running Chastain’s car up the track toward the wall and agitating him as he made his way forward in the race. Hamlin implied afterward that there may be “pay back” sometime down the road.

After the checkered flag, Chastain apologized for the hard racing and insisted it wasn’t his intention to wreck either driver. He promised to speak to both drivers this week.

“We had a good conversation,” Chastain said of his talk with Hamlin. “But whatever happens [this weekend], happens.”

Hamlin’s Joe Gibbs Racing team later posted to social media a photo of a watermelon left at the No. 11 JGR team hauler on Saturday afternoon, suggesting it may have been a gift — or peace offering — from the famed watermelon farmer Chastain.

Chastain revealed in qualifying however, “not me,” saying the team must have been having some fun with it.

Niece Motorsports driver Carson Hocevar, 19, broke a bone in his foot in an accident during last week’s race at World Wide Technology Raceway at Gateway and will have Daniel Suarez trackside at Sonoma Raceway for Saturday’s DoorDash 250 (7:30 p.m. ET on FS1, MRN and SiriusXM NASCAR Radio) ready to serve as a relief driver if needed.

But the Californian, who used crutches to get around when not in his No. 42 Niece Motorsports Chevrolet, still went out and won the pole position by more than a half a second on Saturday afternoon. He turned in the best-in-class lap only to have an off-course excursion just beyond the timing line. The mishap caused enough damage to his truck that Hocevar will have to start the race from the rear of the field.

His Niece Motorsports teammate this weekend, Ross Chastain — one of five NASCAR Cup Series drivers who will compete in the NASCAR Camping World Truck Series race Saturday — will start from pole.

With crutches leaning against his chair in the garage, Hocevar looked discouraged as his team worked on the truck.

“It was dumb. I tried to too hard to get to the line,” he said, adding, “I just wanted the pole and tried too hard, way too hard. … Dumb mistake.”

Prior to the qualifying session, Hocevar reported that he was doing well physically, hoping he “exceeded” the team’s expectations.

“I feel happy, I’m enjoying it, I feel fine, there’s no issue, no complaints,” Hocevar said.

The Michigan native is still racing for his first career victory in his second fulltime season in the series. He finished runner-up in back-to-back races this Spring – at Bristol, Tenn. and Darlington, S.C. He has five top-10 and three top-five finishes and is ranked eighth in the standings through the opening 11 races. His DNF last weekend was his first of the season.

In other notable news from qualifying. …The NASCAR Camping World Truck Series championship leader and reigning champion Ben Rhodes will start 17th in the No. 99 ThorSport Racing Toyota. …two-time NASCAR Cup Series champion Kyle Busch earned a third-place start in the No. 51 Kyle Busch Motorsports Toyota. Busch, who has a record 61 Truck Series wins, is a two-time winner in the NASCAR Cup Series at Sonoma. …California-native Hailee Deegan, a former NASCAR ARCA Menards Series West pole-winner at Sonoma, turned in a ninth-place run in time trials (best by a female in the series on road courses) — marking her second top-10 start of the 2022 season.

Richard Childress Racing driver Austin Dillon is among the handful of NASCAR Cup Series drivers also running in Saturday’s NASCAR Camping World Truck Series race at Sonoma, eager to get some laps of competition in before his primary race on Sunday.

It’s a lot of work this weekend, however, Dillon is buoyed by the fact that immediately after Sonoma the NASCAR Cup Series will have its only “off-week” of the 2022 season.

“I’ve got my vacation planned and my grandfather [team owner Richard Childress] is already on me about getting back to work,” Dillon said. “I was like, ‘Hey, I’m taking this one off-weekend.'”

Dillon said his family is looking forward to spending the rare downtime at the beach, expecting it to allow him to “refocus” on the closing stretch of the regular season.

The driver of the No. 3 RCR Chevrolet is currently winless in 2022 and ranked 16th in the standings, which would not qualify him for the Playoffs with three race winners — Kurt Busch, Austin Cindric and Denny Hamlin — right behind him the standings that jump over him into the top-16 based on their wins this season.

“Mathematically, it’s not hard at all for us to get into the Playoffs if there’s no more winners,” Dillon said. “I think we are in a place where we can point our way in. But I think there are going to be more [race] winners and we need to be one of them.”