Most interesting storylines for NFL Week 14

Battling for their playoff lives 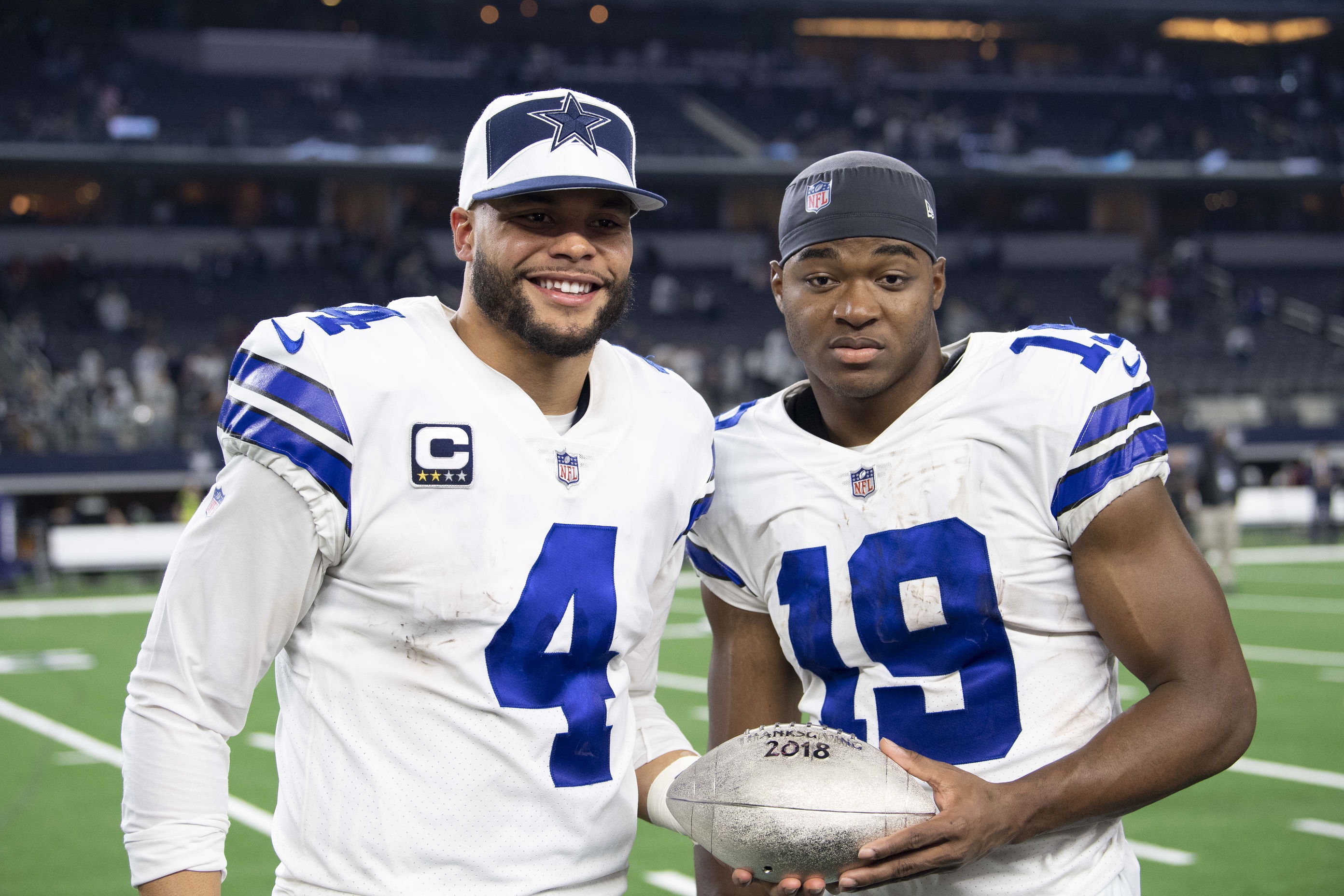 Things should get rather festive around the NFL this coming week. Some teams continue to battle for their playoff lives. That includes the struggling Carolina Panthers and the defending Super Bowl champion Philadelphia Eagles.

Over in the AFC, the Baltimore Ravens will take to Kansas City in a game between two teams winning in opposite ways. Can the Ravens pull off their fourth consecutive win?

And in Dallas, the Cowboys are attempting to pretty much lock up the NFC East. Can Ezekiel Elliott and Co. continue their hot streak?

These are among the most interesting storylines for NFL Week 14.

Panthers’ season on the brink against upstart Browns 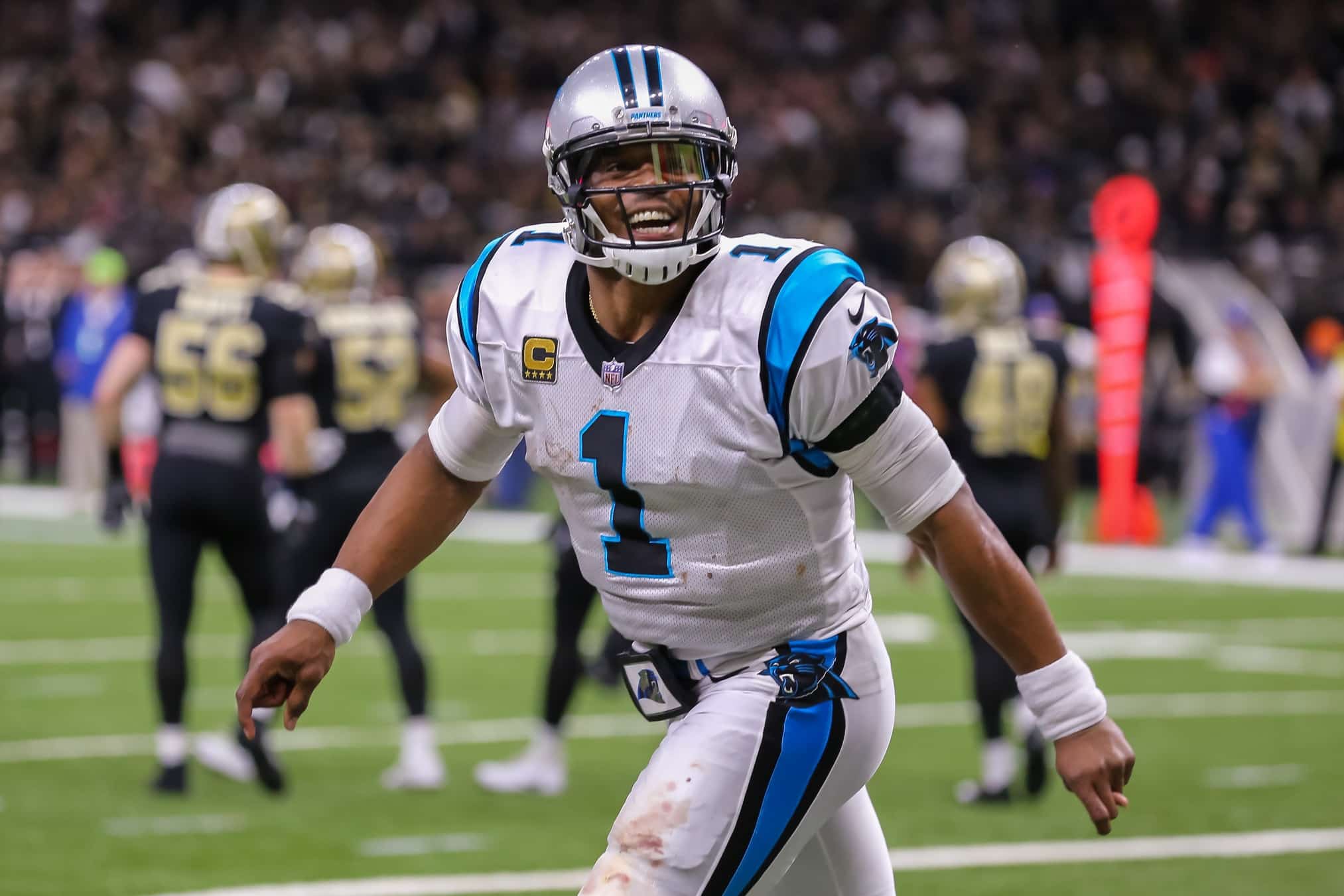 Losers of four consecutive games, Carolina now finds itself on the outside of the NFC Playoff picture. The team simply can’t get out of its own way, as evidenced by the four interceptions Cam Newton threw last week against what had been an historically bad Tampa Bay Buccaneers pass defense.

Unfortunately for the Panthers, their final four games are not going to be a walk in the park. It includes two matchups with the division rival New Orleans Saints. Though, those two games will be pretty irrelevant if the Panthers are not able to come out on top against a solid Browns team Sunday. Cleveland boasts a winning record at home on the season. Meanwhile, Carolina is 1-5 away from the friendly confines.

A new era at Lambeau

Following the justifiable firing of head coach Mike McCarthy, the Packers start a new era of football in Green Bay Sunday against an equally pedestrian Atlanta Falcons team. More so than their attempt to even remain in the NFC Playoff conversation, we’re going to be interested to see how the Packers respond to interim head coach Joe Philbin.


This is a team that’s been headed by McCarthy since all the way back in 2006. It’s a team that’s really not accustomed to change. Adding to the intrigue here is the fact that associate head coach Winston Moss seemingly called out Aaron Rodgers following the McCarthy firing. Moss himself was then fired. Is Green Bay over this drama or will it bleed on to the field Sunday at Lambeau?

Just how good was the Baltimore Ravens’ defense last week against Atlanta? This unit held the Falcons to the lowest yardage output of Matt Ryan’s career (131 yards) in a 26-16 win. That represented the Ravens’ third consecutive victory under rookie quarterback Lamar Jackson. Now at 7-5 on the season, Baltimore is looking like a near playoff lock. This is primarily due to a defense that ranks No. 1 in points allowed, yards allowed and against the pass.

On the other end of the spectrum, the Chiefs head into this Week 14 matchup averaging a league-high 37 points per game and with a record-setting quarterback in Patrick Mahomes leading the charge. Though, Kansas City also yielded 33 points to the hapless Raiders last week and boasts the sixth-worst scoring defense in the league. This should be a fun game between two teams that win in opposite ways.

It’s rather simple for Deshaun Watson and the Texans. Should the Tennessee Titans defeat the Jacksonville Jaguars in an otherwise meaningless Thursday Night Football game, Houston can earn the division title with a victory over the Indianapolis Colts on Sunday.

Winners of nine consecutive games, the Texans are clearly NFL’s hottest team. Watson himself has accounted for 18 touchdowns and six picks during this streak. Meanwhile, J.J. Watt has put up 8.5 sacks in these nine games. This has Houston thinking first-round bye and potential home-field advantage throughout the playoffs. A win against Indianapolis on Sunday would go a long way in accomplishing this feat. 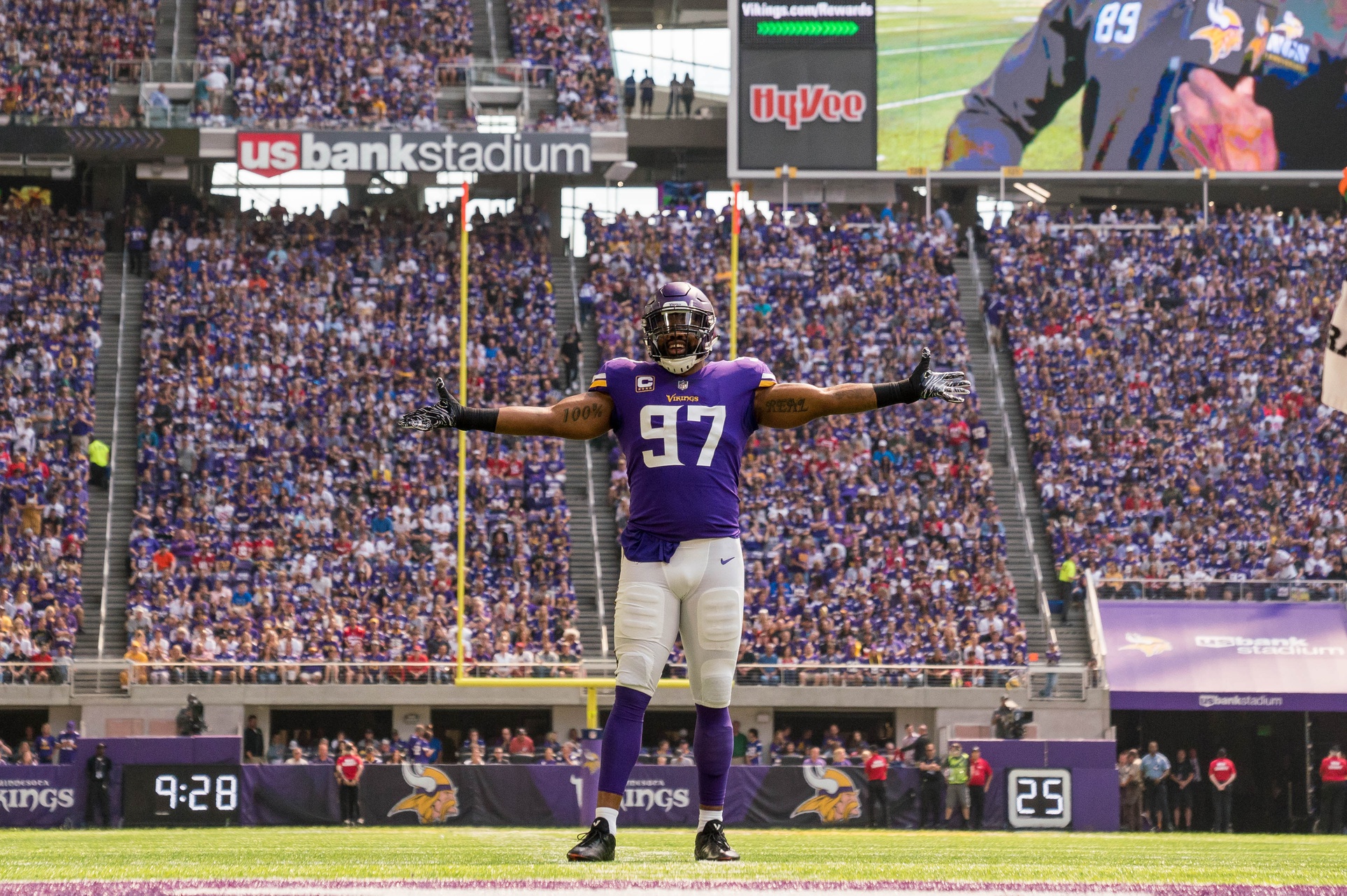 Minnesota clearly wasn’t up for the task of going into New England in December and coming away with a victory. While that’s been the case for pretty much every team during the Tom Brady era, the Vikings’ lack of competitiveness in this game was worrisome. The team is now 6-5-1 on the season and hanging on to the final wildcard spot in the NFC. That’s certainly not what Minnesota anticipated in a season the started with Super Bowl aspirations.

Monday night’s game in Seattle is big for multiple reasons. The Seahawks themselves are a half game up on Minnesota for the No. 5 seed. They’ve won three consecutive and seem to be peaking at the right time. Meanwhile, three teams are only a half game behind Minnesota for the final playoff spot. 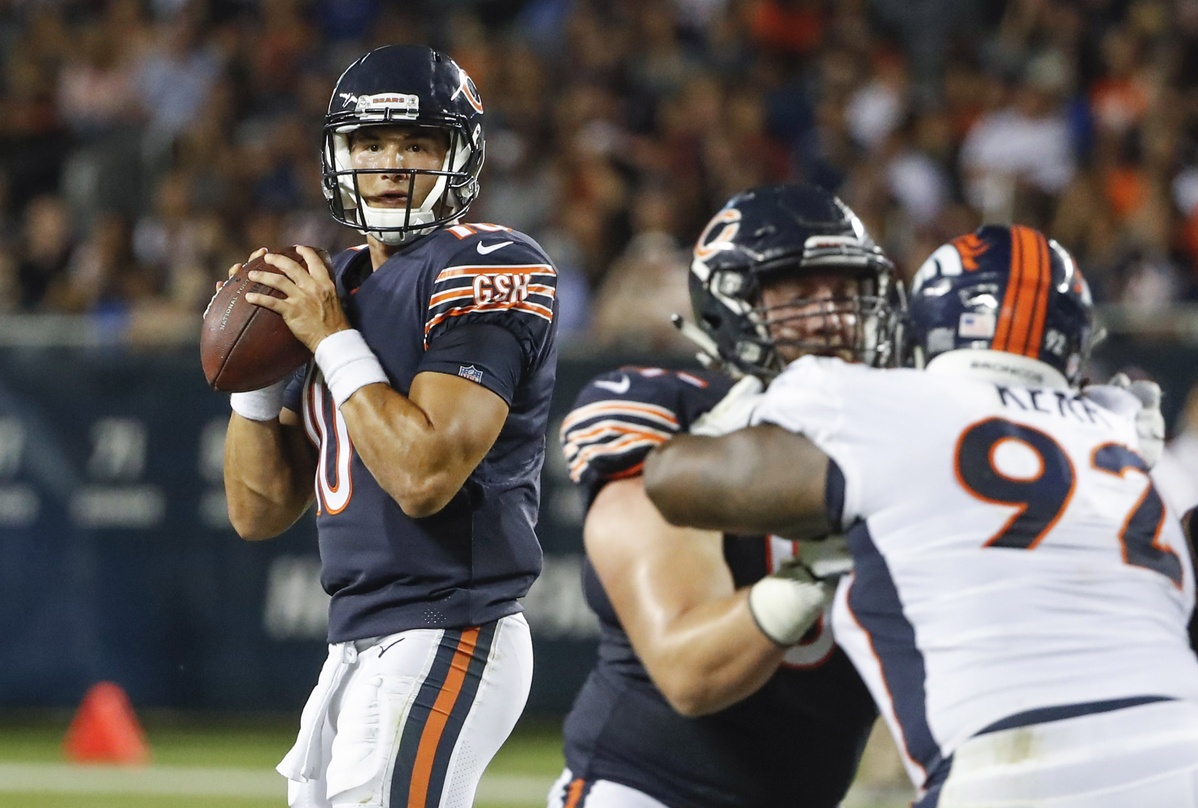 It looks like the Bears will have starting quarterback Mitch Trubisky back for Sunday night’s home date with the Los Angeles Rams. That’s absolutely huge for a first-place Bears team that lost last week to the hapless New York Giants. At 8-4 on the season, Chicago still has an outside shot at earning a first-round bye in the playoffs. A win against the one-loss Rams would go a long way in making this a reality.

From Los Angeles’ perspective, it’s rather simple. The team boasts a one-game lead over New Orleans for home-field advantage throughout the playoffs. It also has the head-to-head tiebreaker over the Saints. Should Los Angeles win three of its final four game, the NFC Playoffs will go through Southern California.

Coaching for their jobs 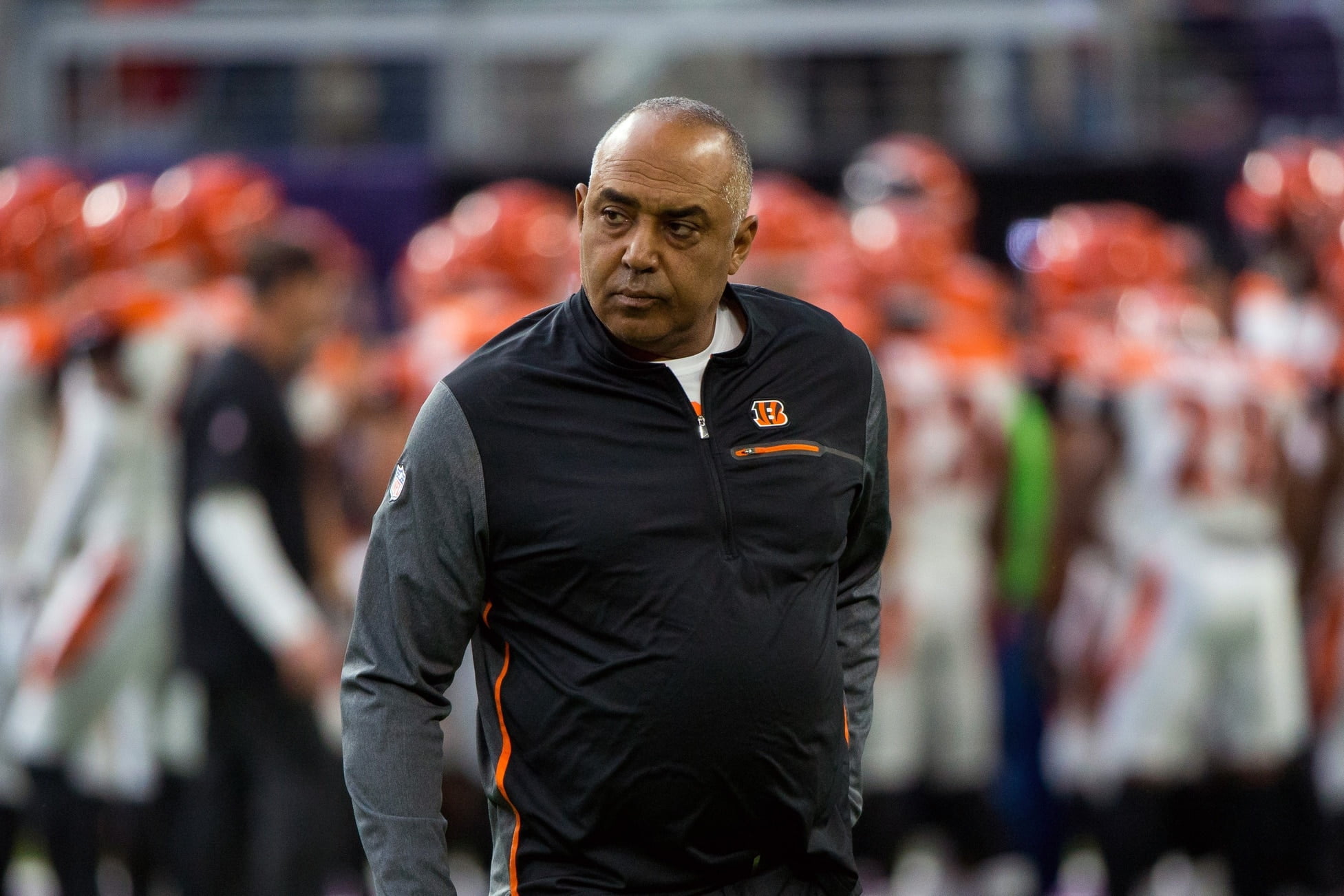 With Hue Jackson and Mike McCarthy already shown the door thus far this season, there’s multiple other head coaches that are clearly on the hot seat. We focused on five of them earlier in the week. And based on what happens in Week 14, multiple coaches could be shown the door on Monday.

Having lost five of their pas six games, the Bengals are playing out the string without the likes of Andy Dalton and A.J. Green. Could Marvin Lewis get his walking paper should Cincinnati be humiliated on the road against the Chargers? Meanwhile, it’s possible that Falcons head coach Dan Quinn could join fellow Super Bowl head man Mike McCarthy on the unemployment line should his team fall completely out of contention this week. At 4-8 on the season, Atlanta will be taking on the above-mentioned Packers and interim head coach Joe Philbin this week. 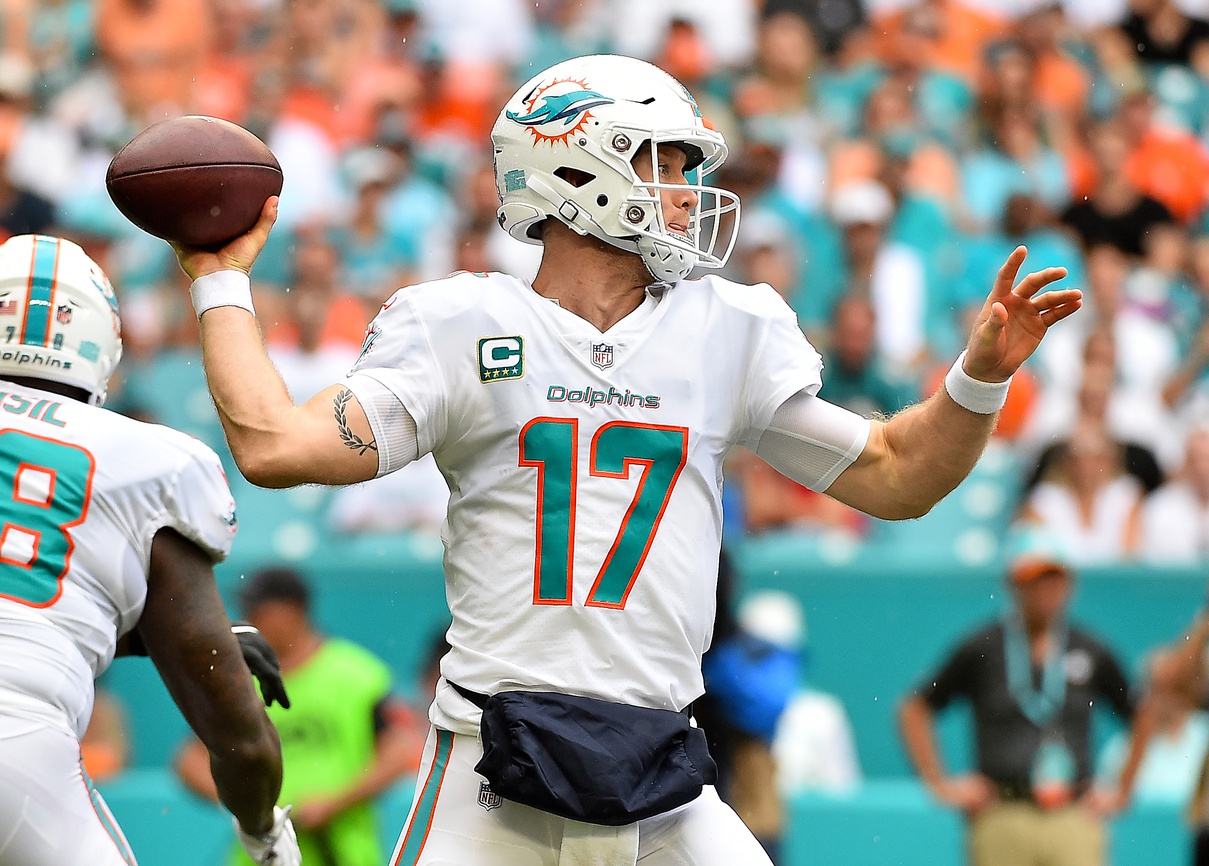 In somewhat shocking fashion, Ryan Tannehill and the Dolphins are just one game out of the final AFC Playoff spot after last week’s win over the Buffalo Bills. After having lost five of seven prior to said win, we’re inclined to think that Miami isn’t for real.


The team can definitely prove us wrong against the first-place Patriots at home on Sunday. A win here would set Miami up nicely for a stretch run that includes games against the bottom-feeding Jaguars and Bills. A loss? Well, that would hand New England its 10th consecutive AFC East title. Yeah, this is going to be a pretty big game in South Beach.

Buccaneers going for season sweep of the Saints 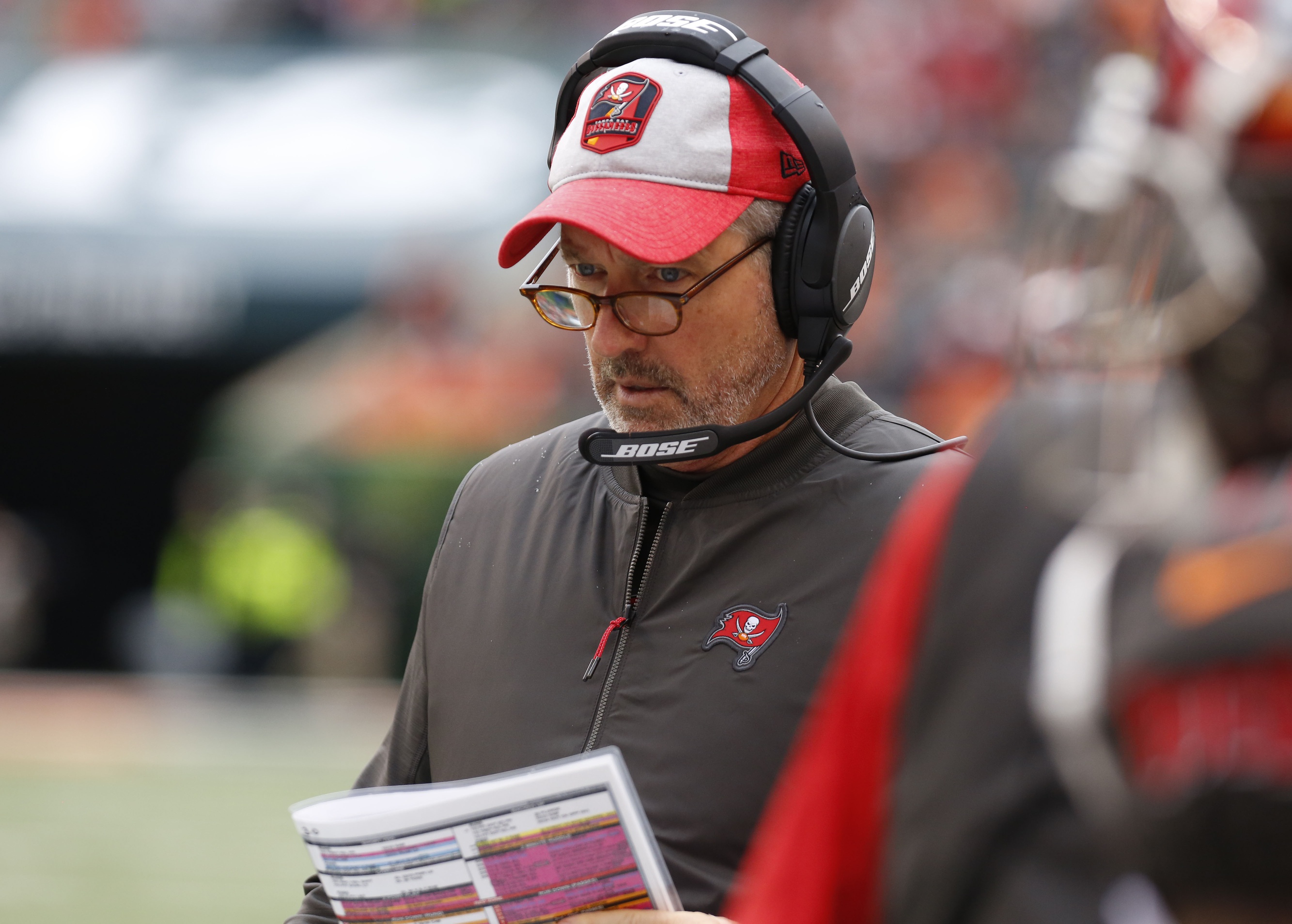 Much like the neighboring Dolphins, these Buccaneers are still alive in the playoff race. In fact, Tampa Bay is just one game behind Minnesota in the win column for the final NFC Playoff spot. In no way does this mean Dirk Koetter’s squad stands a real chance to be playing meaningful January football. But two consecutive wins tells us a story of a team that has improved.

It likely won’t be enough to take out the first-place Saints after Drew Brees and Co. laid a complete egg last week against the Cowboys. But there is certainly some history here. Tampa Bay handed New Orleans one of its two losses back in Week 1. Whether that will mean anything here remains to be seen. 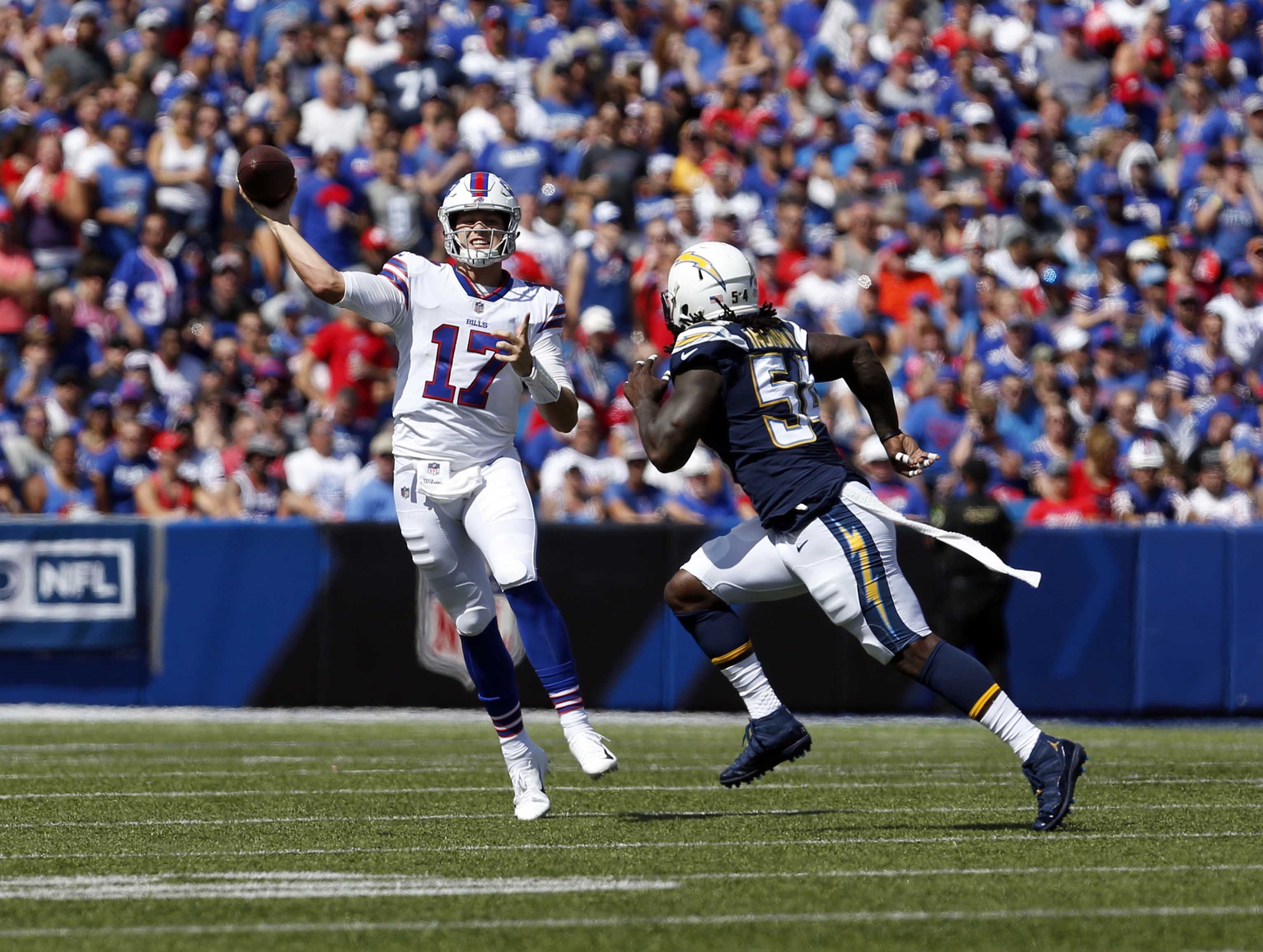 Buffalo looks like a somewhat decent team when this quarterback has been under center. He boasts a 1-1 record since returning from injury and just made NFL history in last week’s loss to the above-mentioned Dolphins. Allen himself has gained 625 total yards with four touchdowns and two picks over the past two games.

Still very much a project, we’re highly intrigued to see how Allen performs against a reeling Jets squad on Sunday. At the very least, it gives fans in Western New York something to look forward to outside of shoveling snow.

Cowboys can ground the Eagles in Big D 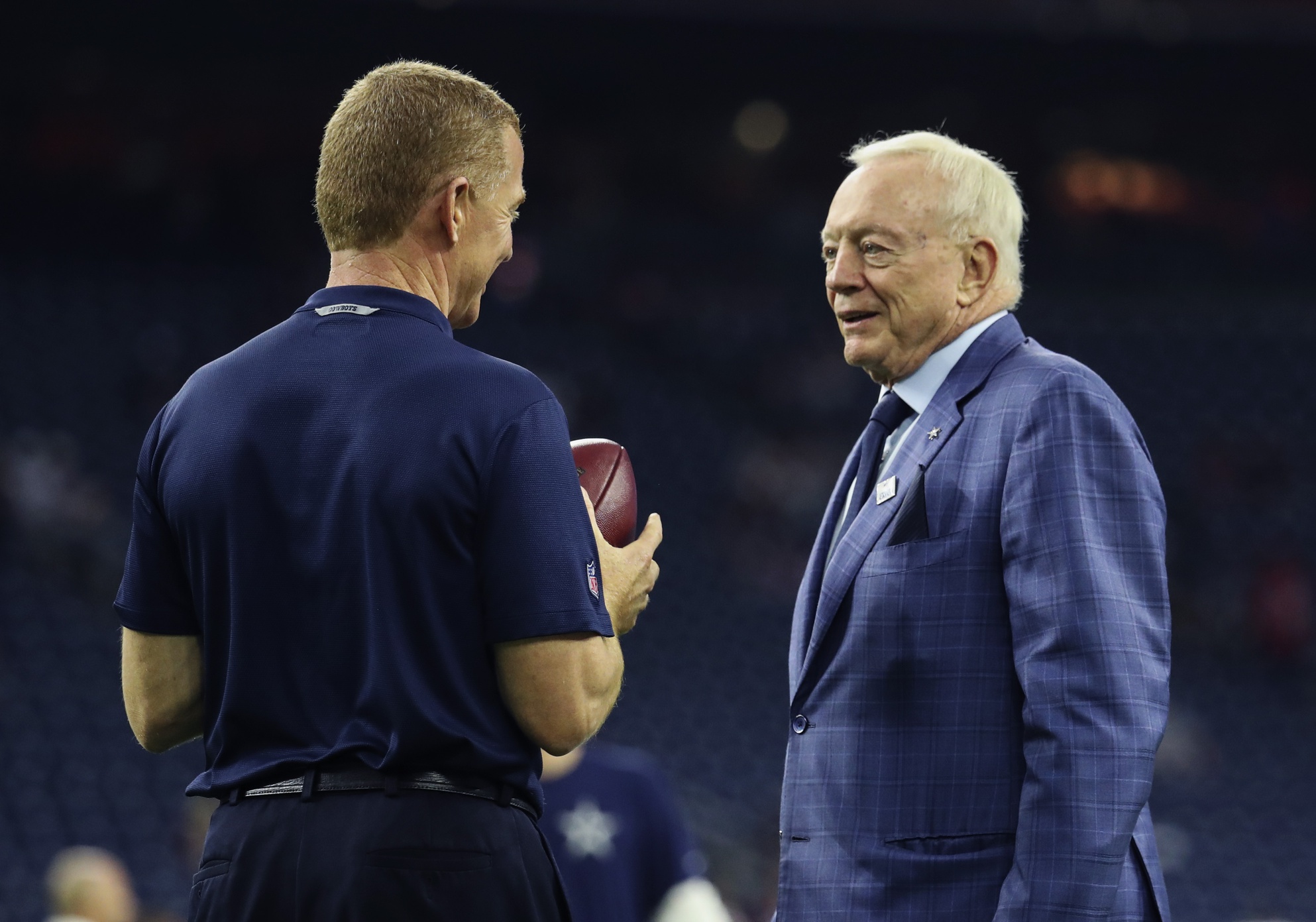 It’s rather simple for Dallas. If Jason Garrett’s squad can complete a season sweep of the defending champs Sunday, the Cowboys will pretty much lock up the NFC East. It would have the team two games ahead of Philadelphia with the head-to-head tiebreaker. Dallas would also be at least one game ahead of a Redskins squad that’s now forced to start Mark Sanchez for the remainder of the season.

Winners of five consecutive games, Dallas is coming on strong at the right time. The addition of Amari Cooper has been huge. Ezekiel Elliott is hitting his groove. Meanwhile, young quarterback Dak Prescott has improved leaps and bounds over the past month. If this continues Sunday in Dallas, the Cowboys will pretty much wrap up the division — sending the .500 Eagles into irrelevance in the process.