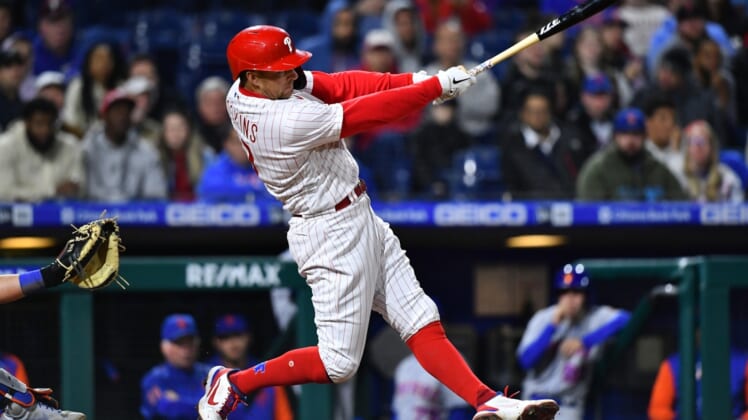 Didi Gregorius’ RBI double capped a five-run eighth inning Monday night by the host Philadelphia Phillies, who stormed back to beat the New York Mets 5-4 in the opener of a three-game series.

The Phillies had just four hits in the first seven innings before the comeback. Alec Bohm, who earlier committed three errors in the first three innings at third base, started the rally with a leadoff walk against Trevor May, who immediately left with what was later termed arm fatigue.

Kyle Schwarber later beat out a potential double-play grounder as Bohm scored from third. J.T. Realmuto followed with a two-run homer to pull the Phillies within 4-3. After Nick Castellanos walked against Seth Lugo (0-1), Rhys Hoskins and Gregorius smacked consecutive doubles for the winning margin. Newcomer Brad Hand nailed down the 1-2-3 save in the ninth.

Mets starter Taijuan Walker, who underwent knee surgery in the offseason, exited after two perfect innings with four strikeouts due to an irritated right shoulder. Brandon Nimmo had two hits for the Mets, who blew an eighth-inning lead for the second straight game.

Alek Manoah pitched six innings of one-hit ball and George Springer homered and drove in three runs as visiting Toronto shut out New York in the opener of a four-game series.

Springer collected three hits and hit a two-run homer off Jameson Taillon (0-1) before getting an RBI double in the seventh as the Blue Jays won for the fifth straight time in New York. Manoah (1-0) allowed only a single to Joey Gallo in the second.

Taillon produced the longest outing by a New York starter in the early going, allowing two runs on five hits in five innings. In his first start since offseason ankle surgery, he struck out six and walked none.

Dylan Bundy allowed one hit over five shutout innings as Minnesota earned a split of its season-opening, four-game series against Seattle with a shutout victory in Minneapolis.

Luis Arraez went 3-for-4 with a run and an RBI, Byron Buxton had two doubles and scored twice and Jorge Polanco added a single, a double and two RBIs for Minnesota, which finished with 10 hits.

Bundy (1-0) allowed just a two-out ground double over the third base bag to Eugenio Suarez in the second inning. Chris Flexen (0-1) took the loss, giving up three runs on five hits and three walks over 4 1/3 innings. He fanned three.

Austin Meadows led off the inning with a single against Austin Davis (0-1). Ryan Brasier replaced Davis on the mound, and Baez hammered a 2-2 fastball for his first homer with the Tigers. Baez signed a six-year, $140 million contract with Detroit as a free agent during the offseason.

Meadows had two hits and scored two runs while Miguel Cabrera supplied two hits and an RBI for Detroit. The Red Sox were limited to four hits, two from Rafael Devers, in the opener of a three-game series.

Left-hander Josh Rogers, a late substitute starter for the Nationals, pitched visiting Washington to a win over Atlanta in the opener of a three-game series.

Rogers (1-0) pitched 5 1/3 innings and allowed only two hits and one run. The Washington offense was led by Maikel Franco, who went 4-for-5 with a homer and five RBIs. The Nationals amassed 15 hits and seven walks.

Steven Kwan established a major league live-ball record by reaching base safely for the 15th time over his first four games, including a bases-clearing triple in the eighth inning, as Cleveland won at Kansas City.

The two teams split the season-opening, four-game series. Kwan, who had five hits on Sunday, broke the record (for play since 1901) with two walks earlier Monday before his triple broke open the game.

Oscar Mercado homered and knocked in three runs for the Guardians. Andrew Benintendi went 3-for-3 with a homer, three RBIs, two runs and a pair of walks for the Royals.

Elvis Andrus went 3-for-5 with one of Oakland’s four homers, starter Paul Blackburn fired five shutout innings and the A’s prevailed in St. Petersburg, Fla., to hand Tampa Bay its first defeat of the season.

Andrus popped a three-run home run for an 8-0 lead during a four-run second inning. In the Oakland first, Seth Brown hit a three-run blast and Chad Pinder followed with a solo shot. Blackburn (1-0) cruised from there, giving up just three hits and a walk while striking out seven.

Rays starter Luis Patino (0-1) left in the top of the first after tossing just 13 pitches and getting two outs. The club’s No. 4 starter squatted in pain and was removed with what was diagnosed as a left oblique strain. Chris Mazza relieved and allowed seven hits and eight runs — six earned — over three frames, including three long balls.

Cedric Mullins drove in two runs and Bruce Zimmermann and four relievers combined to toss a six-hit shutout as Baltimore celebrated its home opener with a win over Milwaukee.

Milwaukee is off to a 1-3 start after dropping two of three games over the weekend to the Chicago Cubs. The Brewers left nine men on base and went 0-for-6 with runners in scoring position.

Anthony Santander had two hits and reached base four times for Baltimore, which earned its first win after losing three straight in its season-opening series against the Rays.

Connor Joe and C.J. Cron homered and finished with two hits each, Jose Iglesias had four hits and Colorado beat Texas in 10 innings at Arlington, Texas.

Jose Iglesias hit the go-ahead single in the 10th, and Joe followed with a homer. Kris Bryant and Elias Diaz had two apiece and Ashton Goudeau picked up his first career save for Colorado, which has won three straight.

Willie Calhoun homered and Adolis Garcia had two hits and two RBIs for Texas, which lost its home opener. Cron’s solo homer in the top of the ninth — his second of the season — made it 4-3, but Calhoun tied it with a two-out home run off Daniel Bard (1-0).