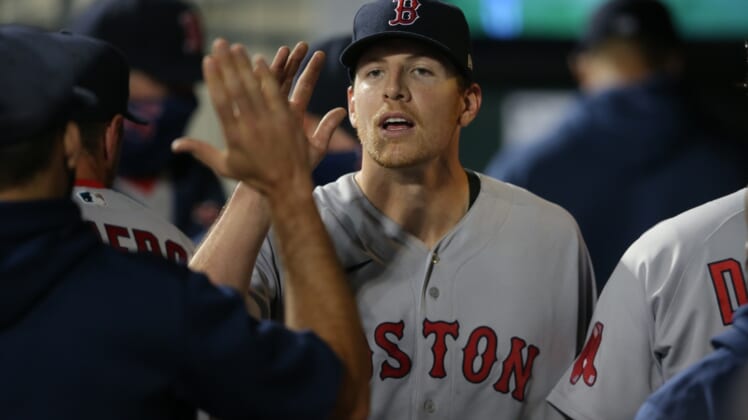 Nick Pivetta outdueled a history-seeking Jacob deGrom on Wednesday night, when the Boston right-hander tossed five scoreless innings, combined with three relievers on a two-hitter and earned the win as the visiting Red Sox edged the New York Mets 1-0.

Christian Vazquez had an RBI double in the second inning for the Red Sox, who swept the two-game interleague series.

deGrom (2-2), seeking to become the first pitcher to ever strike out at least 14 batters in four straight starts, took a familiar hard-luck defeat after allowing the one run on three hits and one walk while striking out nine over six innings.

The nine strikeouts increased deGrom’s season total to 59 — tied for the most ever through a pitcher’s first five starts in a year with Nolan Ryan (1978).

Philadelphia defeated host St. Louis but saw right fielder Bryce Harper exit the game after he was hit by a 97 mph pitch in the sixth inning. Harper was bloodied, but he left the field under his own power and said after the game that he avoided serious injury.

Reliever Genesis Cabrera (0-1), who took the loss, also hit Didi Gregorius with his next pitch, this time in the back of the rib cage, and the Phillies scored the go-ahead run later in the inning. Phillies reliever Brandon Kintzler (1-0) earned the victory, and Hector Neris picked up his fifth save.

Alex Wood won his third straight start and Camilo Doval pitched out of a seventh-inning mess with minimal damage as host San Francisco held off Colorado for its fifth win in the past seven games.

Mike Tauchman collected three hits in his Giants debut, while Brandon Belt, with one hit, and Curt Casali, with two bases-loaded walks, drove in two runs apiece. Wood (3-0), who carried a no-hitter into the sixth inning, worked six-plus innings and was charged with two runs on four hits. He walked two and struck out nine.

German Marquez (1-2) took the loss after allowing four runs and four hits in four innings. He issued three walks and struck out five.

Houston mounted a stunning four-run rally in the eighth inning and claimed a series victory over visiting Seattle.

The Astros batted around in the eighth while erasing a 5-3 deficit, initiating the comeback against Mariners right-hander Rafael Montero (2-1) with a one-out single from Kyle Tucker, who later scored on a throwing error by Seattle first baseman Evan White.

Ryne Stanek worked a perfect ninth for Houston, earning his first save. Joe Smith (1-1) took the win in relief.

The Twins avoided a series sweep by the Indians in a big way, grabbing a 4-0 lead in the top of the first inning. Minnesota had lost eight of its previous nine games.

Minnesota hit a total of six home runs in the win with Mitch Garver socking two of them. The franchise record of eight homers in one game was set in 1963 against the Washington Senators.

Sandy Alcantara allowed two runs over a season-high seven innings and Jesus Aguilar homered for the fifth time in the past six games to lead Miami over host Milwaukee.

Both runs against Alcantara (1-2) came on a third-inning homer by Kolten Wong. Alcantara allowed five hits and struck out four without issuing a walk on 93 pitches.

Brewers starter Zack Godley (0-1) struck out five and allowed only one hit, but he surrendered four runs (three earned) and walked five. Godley left after three innings in his Brewers debut due to a finger injury.

Clayton Kershaw was up to his old tricks, pitching seven scoreless innings while leading Los Angeles to a shutout victory over Cincinnati to close a disappointing homestand on an uplifting note.

Justin Turner hit a home run and the Dodgers blew open the game late with a six-run eighth inning. Kershaw (4-2) made sure the team had what it needed from the mound, giving up four hits with one walk and eight strikeouts for his 96th career victory at Dodger Stadium over 186 starts.

Nick Senzel had four hits for the Reds, three off Kershaw, while starter Sonny Gray struck out 11, one off his career high, over 5 2/3 innings. Gray (0-2) yielded two runs on four hits and three walks.

Jorge Soler was 3-for-5 and drove in three runs with two doubles and a single as Kansas City topped host Pittsburgh to split a two-game series.

Hunter Dozier added a two-run triple, Andrew Benintendi a two-run double and Salvador Perez had three hits, including a double, and drove in a run for the Royals. Kyle Zimmer (2-0) followed starter Mike Minor with a scoreless two-thirds of an inning to get the win, and Josh Staumont pitched the final 1 1/3 innings for his third save.

Slumping San Diego tied a franchise record with seven straight hits to open an inning — capped by Manny Machado’s bases-loaded triple in the fifth — en route to a rout of Arizona in Phoenix.

Before the six-run burst, the Padres had scored just one run on seven hits over the first 13 innings in Arizona. They finished with 15 hits Wednesday.

Five San Diego batters had two hits apiece in the win, which came at a price. Rookie left-hander Ryan Weathers departed the game after one inning with what was described as arm soreness.

Los Angeles got seven scoreless innings from its bullpen and made four first-inning runs stand up in a victory at Arlington, Texas.

Anthony Rendon and Jose Iglesias each had a two-run single in the first inning off Rangers starter Dane Dunning. That would be enough thanks to four Angels relievers who combined to allow just two hits and a walk after starter Alex Cobb went just two innings.

The Rangers chipped away at the Angels’ lead, getting an RBI infield single by Nate Lowe in the bottom of the first, and then bunching four hits in the second inning that resulted in two more runs to cut their deficit to 4-3.

Freddie Freeman and Austin Riley both went 4-for-5 with a home run and Huascar Ynoa pitched 5 1/3 shutout innings while delivering one of five Atlanta homers in a rout of visiting Chicago.

The Braves won their third straight against the Cubs to begin the series, out-hitting them 18-5. Atlanta will go for a four-game sweep Thursday. Chicago has lost five straight. The Cubs haven’t scored in 20 consecutive innings.

Atlanta reached Cubs starter Kyle Hendricks for 11 runs on seven hits in 3 2/3 innings to defeat the right-hander for the second time in 10 days. Ynoa (2-1) scattered four hits and two walks while getting nine of the 11 strikeouts recorded by Braves pitching.

In another dominant outing, Glasnow (3-1) allowed five hits and two walks over 97 pitches. He reached double digits in strikeouts for the third time in six starts this season.