The NFL just implemented strict penalties for teams who have a COVID-19 outbreak during the 2021 season, and the Minnesota Vikings weren’t taking any chances with offensive line coach and run game coordinator Rick Dennison.

Because Dennison refused the vaccine, Minnesota relieved him of his duties on Friday, per ESPN.com’s Courtney Cronin, and made corresponding moves to address his vacant spot:

This comes on the heels of the NFL ruling on Thursday that if a COVID-19 outbreak happens on a team between unvaccinated players, that team will forfeit their games if rescheduling them isn’t possible during the 2021 campaign. Those players responsible won’t get their weekly salaries, either.

It seems rather extreme, but with the Delta variant causing COVID cases and hospitalizations to spike across the country, the NFL is clearly not messing around.

Vocal opponents of the vaccine include Buffalo Bills wide receiver Cole Beasley and Arizona Cardinals star DeAndre Hopkins. Beasley appeared to get called out by his own teammate, Stefon Diggs, when Thursday’s news broke, and Hopkins deleted his tweet about questioning his NFL future because of the strict vaccine policy. 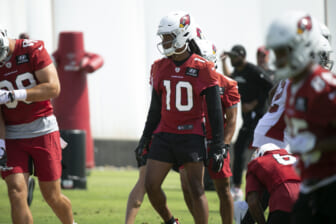 As for Dennison, he’s built quite a nice coaching career. The 63-year-old was a player first for the Denver Broncos from 1982 to 1990, and then joined Denver’s coaching staff and steadily worked his way up.

Dennison served two offensive coordinator stints for the Broncos, and has called plays for the Buffalo Bills and Houston Texans during his time as an assistant. Most recently, he was the New York Jets’ run game coordinator and offensive line coach in 2018 before joining the Vikings in 2019 to serve those same roles.