Minnesota Vikings linebacker and top tackler Eric Kendricks will not play Sunday at Detroit due to a biceps injury.

Kendricks was downgraded to out for the NFC North contest between the Vikings (5-6) and Lions (0-10-1).

The Vikings also elevated running back Jake Bargas and defensive back Myles Dorn from the practice squad and activated defensive lineman Kenny Willekes as a COVID-19 replacement. 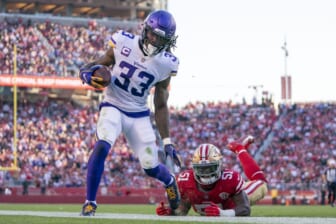 Kendricks, 29, has started every game this season and registered a team-high 109 tackles with four sacks and two interceptions.

Nwangwu, 23, was a fourth-round pick in the 2021 draft and has 16 rushing yards in five games. He has returned two of his eight kickoffs for touchdowns, including a 99-yarder last Sunday at San Francisco.

Pierce, 29, has not played since Oct. 3 due to an elbow injury. He has nine tackles and two sacks in four starts this season.