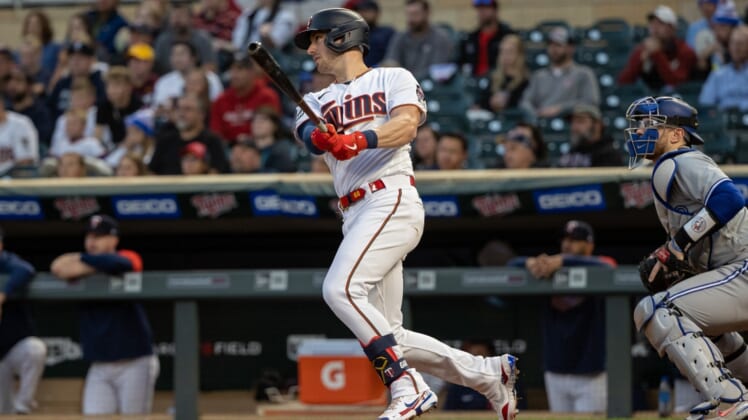 Rookie Nick Gordon hit a three-run homer to highlight a four-run fifth inning and lead the Minnesota Twins to a 7-2 victory over the Toronto Blue Jays in the opener of their four-game series on Thursday night in Minneapolis.

Toronto (85-68) took its third consecutive loss and fell a full game behind the idle New York Yankees for the second American League wild-card spot. The Blue Jays, who host the Yankees in a three-game series next week, are one-game ahead of the Seattle Mariners (84-69) which completed a four-game sweep of the Oakland A’s earlier on Thursday.

Gordon finished 3-for-4 with four RBIs, his fourth career three-hit game and second in the past three games. Mitch Garver went 3-for-4 with a double, a run and an RBI, and Byron Buxton doubled and had two hits and a walk for Minnesota (68-85), which won its third straight game.

Michael Pineda (8-8) picked up the win, defeating the Blue Jays for the second time in the span of seven days. Pineda allowed two runs on eight hits over five innings. He struck out two and walked one.

Ralph Garza Jr. got George Springer to line out on a comebacker with the bases loaded in the eighth and picked up his first career save with 1 1/3 scoreless innings of relief.

Teoscar Hernandez homered, doubled and scored twice and Marcus Semien had two hits for Toronto, which fell for the third time in its past four games. Thomas Hatch (0-1), who left the game with a right hamstring injury, took the loss allowing three runs on one hit and three walks over 1 2/3 innings.

Toronto took a 1-0 lead in the second inning when Hernandez led off with a double and scored on a double into the left-center-field gap by Lourdes Gurriel Jr.

Minnesota took a 2-1 lead in the third. Buxton led off with a double and scored on Jorge Polanco’s single. Polanco advanced to second on a walk to Josh Donaldson and then scored on a Garver single.

The Blue Jays tied it 2-2 in the fourth when Hernandez led off with his 30th homer of the season, a 363-foot drive down the left field line.

The Twins then took a 6-2 lead in the fifth.

Donaldson led off with a walk and advanced to third on Garver’s double to left-center. Luis Arraez drove in Donaldson with a groundout to second to give Minnesota a 3-2 lead.

After Miguel Sano struck out, Brent Rooker walked with Hatch then departing due to his injury. Gordon then hit his fourth home run of the season, off Julian Merryweather, a 394-foot drive into the plaza behind the right field bleachers to make it 6-2.

The Twins extended the lead to 7-2 in the seventh on Gordon’s RBI single, driving in Rooker, who had doubled.

Gurriel exited in the fifth inning after his right hand was stepped on during a play in the outfield. He received two stitches, but X-rays were negative.