The Miami Heat’s game plan against the Philadelphia 76ers

The Miami Heat face the Philadelphia 76ers on Thursday night with seeding on the line. Here's what the Heat need to do if they want to come away with a win.

The Miami Heat face off against the Philadelphia 76ers on Thursday night with only three games remaining in the regular season. With the season nearing a conclusion, Miami is fighting for playoff positioning with outcomes ranging from the No. 4 to the No. 6 seed.

Miami is coming off a playoff-clinching win against the Boston Celtics, with its offense was hot once again. Philadelphia is trying to clinch the No. 1 seed in the Eastern Conference after falling to the Indiana Pacers on Tuesday night.

Both teams have something to play for as they look to secure positioning in the NBA Playoffs, so each will bring their best on national TV.

Joel Embiid has averaged 27.0 points, 10.5 rebounds, and 3.0 steals against the Heat this season, but both of those matchups came against a team with only three players that are currently in the rotation.

Jimmy Butler and Bam Adebayo didn’t play in either game and Miami put up a fight against Philadelphia, with one game going into overtime. Now, it might be the other way around as the regular season nears its end.

Embiid is questionable for Thursday night’s game due to an illness unrelated to COVID-19. The MVP candidate reportedly didn’t make the trip to Miami as of Wednesday night, so there’s a possibility he won’t suit up.

If Embiid does play, the Heat need to make sure that stopping him is a priority. Adebayo would be tasked with guarding Embiid and Dewayne Dedmon would most likely be another option due to his size and recent play.

The Heat haven’t been at full strength until recently and they played short-handed against the 76ers in the last meeting. Neither team has played each other at their best, so it would actually be good for Embiid to play if he can.

If the Heat remain the No. 5 seed, they could face the 76ers in the second round if both teams advance. It could be a good idea of what they are dealing with if Embiid does play.

Keep the Philadelphia 76ers at bay in the fourth quarter

The Heat have been a decent fourth-quarter offense the last two games with an average of 30.5 points in the final quarter. However, the downside for Miami has been its defense in those contests.

Boston scored an average of 41.0 points in the fourth quarter during the last two games against Miami. That type of effort on defense is unacceptable, especially since Miami has relied on its defense more than its scoring this season 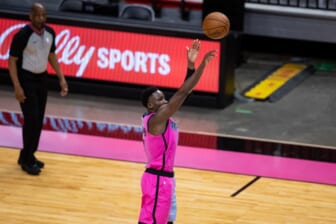 They have not been a good fourth-quarter team as of late and it could play into Miami’s favor if the trend continues. But, the 76ers did not have Embiid against the Pacers and did play the Detroit Pistons. However, playing without Embiid isn’t the reason for the team’s struggles in the clutch. Philadelphia had its full roster against the New Orleans Pelicans last week and only scored 39 points in the second half.

The 76ers have only scored over 50 points twice in the last five games and who were those teams? The Pistons and Houston Rockets, which are the two worst teams in the NBA.

If the Heat can lock the 76ers down in the fourth quarter, there’s a strong likelihood that they could pull away with a win.

Miami Heat must stay hot from beyond the arc

Miami has been the hottest three-point shooting team in the NBA over the past week. The Heat are shooting 46.4% from beyond the arc, which is 1.5% higher than any other team in the NBA.

Both of these quarters are a big reason why Miami is tied with Milwaukee for the most points per game in the last week at 126.7 points. The Heat’s offense has been hot recently, with five of the last six games coming in at over 120 points.

This comes after not scoring 120-plus points in a game since March 25th when the Heat lost to the Trail Blazers in Miami. A big reason for this could be Tyler Herro returning from his foot injury.

Herro has averaged 21.0 points, 5.7 rebounds, and 2.3 assists in the last three games since returning from his injury. It may have been a blessing in surprise for Herro due to his struggles and the rest will help him as we enter the NBA Playoffs.

The Heat must win this game to maintain the No. 5 seed. They control their destiny and if they can win out, they will enter the NBA Playoffs no worse than the fifth-seeded team in the East.