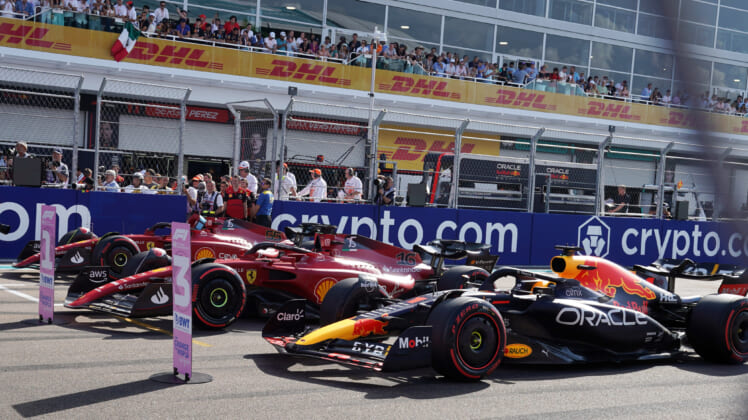 Formula One is exploding in the United States as of late, especially with the increased popularity of the Netflix series A Drive to Survive. Now, F1 is coming to Miami, Florida with the inaugural 2022 Miami Grand Prix taking place on Sunday.

It’s going to be an experience for everyone involved. Lewis Hamilton has become a favorite of many, but the seven-time F1 champion is struggling this season. Entering the Miami Grand Prix, Charles Leclerc (86 points) and Max Verstappen (59 points) sit atop the F1 standings and Hamilton (28 points) is in a distant 7th place.

This is only part of F1’s broadening reach into the US with Miami hosting the United States Grand Prix after Austin (2012-’19 and 2021) held the event for years. Austin is still scheduled to host an F1 race this year.

Keeping all that in mind, here’s everything you need to know about the Miami Grand Prix.

Here are the race details for the Miami Grand Prix at the Miami International Autodrome track, located right next to Hard Rock Stadium.

The Miami International Autodrome is only a temporary track, built around Hardrock Stadium in Miami Gardens, Florida. This will be the inaugural race on the track.

Because this is the first-ever race at the Miami International Autodrome, there are no track records.

This is also going to be a new experience for drivers in an unfamiliar environment. It means, as of now, there is no determined advantage for any specific driver or team.

One interesting wrinkle to all of this is the fake marina included. With the flat track built around HardStock Stadium, designers had to get creative. Because Miami Gardens is not on the water, a fake marina was built to create the visual perception of this race happening by the ocean.

For those looking for excitement, there are three drag reduction system zones on the track that will allow multiple opportunities for F1 drivers to attempt passes on Sunday afternoon.

Here are the latest odds for the 2022 Miami Grand Prix, via BetMGM.

The leader in the F1 standings to date, the 24-year-old already has victories for Ferrari in Bahrain (March 10) and Australia (April 10) this season. While his odds of winning are right up there with Verstappen, the belief is his history of sometimes making costly mistakes at the worst times might swing this race. However, his showing in practices and the qualifying put him in the No. 1 pole position and he’s now the favorite.

The 24-year-old native of Belgium is the reigning Formula 1 World Champion, defeating Hamilton in a controversial finish last year. Verstappen has 22 career wins, including a dominating victory at the Emilia Romagna Grand Prix on April 24. He’s looking for his second win in the 2022 F1 season (Saudia Arabia) and is rightfully one of the best bets to win the Miami Grand Prix.

While Perez doesn’t have a win this season, the 32-year-old is consistently delivering and is another big reason why Ferrari is atop the 2022 Constructor Standings. Perez finished second in Italy and Australia with a fourth-place finish in the Saudi Arabian Grand Prix.

The 2022 season is already becoming one to forget for one of the best F1 drivers ever. Lewis Hamilton, age 37, finished 13th in Italy and took fourth in the Australian Grand Prix. Given the issues going on this year between Mercedes and Hamilton, even a podium finish at the Miami Grand Prix seems unlikely.

Has F1 ever raced in Miami?

Miami does have a history in racing, but its experience with Formula 1 is more limited. According to ESPN, the first Grand Prix of Miami was held in 1983. However, Miami Gardens is considered to be outside ‘Miami’.