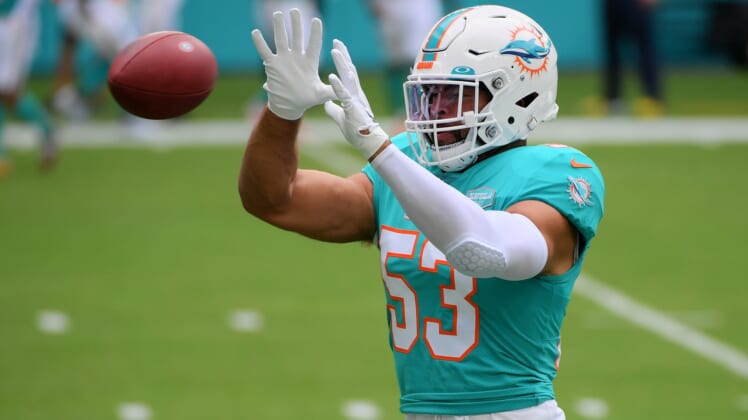 The Miami Dolphins have informed linebacker Kyle Van Noy that they intend to part ways with him either via release or through a trade.

However, since it’s known Miami could well cut him loose, the trade market for Van Noy isn’t expected to be robust.

Mike Garafolo of NFL Network posted a note from Van Noy, who expressed disappointment in not being able to continue his career in Miami:

Ian Rapoport followed up by reporting that despite the initial talk that Van Noy would be released, the Dolphins are in fact looking to trade him before just cutting ties with the veteran:

Van Noy was previously a member of the New England Patriots and a two-time Super Bowl champion who was meant to help Miami continue cementing its new defensive system under head coach Brian Flores, who shared time with Van Noy in Foxborough.

After signing him to a four-year, $51 million contract last offseason, though, the Dolphins quickly moved on from Van Noy, whose release or trade will save the team approximately $9.8 million in salary cap space for 2021.

Whether this is a precursor to a larger move Miami is planning or simply a case of not being pleased with the production it got out of a marquee free agent is unclear. What is certain is Van Noy’s departure is going to test the Dolphins’ depth on their front seven.

Already without a true marquee pass-rusher, Van Noy’s absence means the Dolphins either have a free-agent upgrade in mind or will try to get younger at the linebacker spot through the first two rounds of the 2021 NFL Draft.

There are some intriguing linebacker prospects Miami could consider with the 18th overall pick, such as Penn State’s Micah Parsons, Notre Dame standout Jeremiah Owusu-Koramoah or Tulsa’s Zaven Collins. It’ll be interesting to see if general manager Chris Grier goes in that direction to hopefully improve the unit’s long-term upside.

As for Van Noy, there’s a bit of mystery as to why he was let go. His intangible leadership and familiarity with Flores’ system will be missed. He ranked 26th in Pro Football Focus’ linebacker player grades in 2020. That’s really not bad when taking into account his versatility to line up on the edge or inside.

Van Noy proved with the Patriots he can serve as a complementary piece on a championship defense who can rush the passer and defend the run well. Thus, his skill set will be coveted on the open market.

In fact, the McCourty twins even took to Twitter to implicitly advocate for Van Noy’s return to the fold:

Suitors will be able to land Van Noy at a bargain compared to his previous monster contract in part due to his abrupt release from the Fins. It’s also a season in which the salary cap is tighter than usual, which will inevitably hinder his value. There shouldn’t be a shortage of offers for Van Noy’s services, though.

It wouldn’t be a shock if the Patriots brought back Van Noy for a second stint. They’re already expected to return key defensive contributors who opted out of last season in Patrick Chung and Dont’a Hightower, so getting their veteran core back together on that side of the ball may become an offseason theme.

Maybe there’s some desire for Van Noy to not only return to New England, but at the same time to stay in the AFC East division and stick it back to the Dolphins for ditching him.