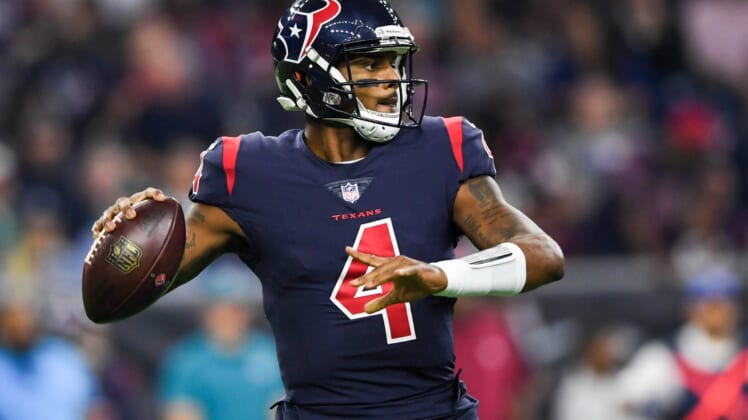 It’s not yet known how close the Miami Dolphins came to pulling off a trade for Houston Texans quarterback Deshaun Watson ahead of the Nov. 2 NFL trade deadline.

What we do know is that Miami was apparently willing to offer up the farm if Watson settled the north of 20 civil cases being levied against him claiming sexual misconduct.

According to Glazer, the Fins were willing to offer up three first-round picks and two second-round selections to Houston for Watson. All of this was contingent on Watson settling the aforementioned cases, which never happened.

This follows a previous report that indicated Miami owner Stephen Ross wanted to meet with Watson before finalizing a trade. The Texans pushed back against that once learning that the Pro Bowl signal caller was willing to settle his civil cases to help facilitate a trade.

Apparently, Texans general manager Nick Caserio took a step back once learning of that. Instead, he’s going to wait to see how the civil cases play out. If they are settled ahead of the start of NFL free agency in March, Houston would have gained some leverage as it relates to trade talks with the Miami Dolphins and other teams.

Glazer’s report also indicates that the Carolina Panthers were willing to pull off a deal for Watson without the quarterback settling his civil cases. However, Carolina’s offer was not up to snuff.

Miami Dolphins stuck without Deshaun Watson in the mix

Young Dolphins quarterback Tua Tagovailoa is missing his second consecutive game after suffering a hand injury back in Week 8. In his stead, veteran journeyman Jacoby Brissett is starting.

Brissett started this past Sunday’s win over the hapless Jacksonville Jaguars –committing three giveaways in a game that saw the two teams turn the ball over a combined nine times.

This speaks to the continued quarterback issues in South Beach. Tua has not been able to stay healthy. And when he’s been on the field, the former Alabama standout has been about as inconsistent as it gets.

All of this has led to rumors suggesting head coach Brian Flores could soon be out of a job. It’s a shocking realization to come to given that Miami won 10 games a season ago.

The good news here, at least long term, is that Miami will have options to fix its quarterback situation during the off-season. That could include kicking the tires on Watson once again. The bad news? Miami has not had a franchise-caliber quarterback since Dan Marino retired back in 1999.

As for this season’s iteration of the Dolphins, they entered Thursday’s action ranked 28th in the NFL in scoring at 17.2 points per game. Their quarterbacks have also combined for just 12 passing touchdowns against nine interceptions in nine games. That’s just not going to cut it.