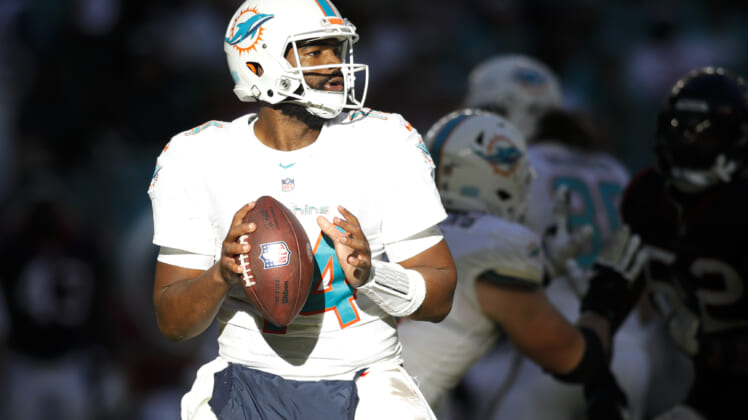 Fresh off an ugly win over the Jacksonville Jaguars, the Miami Dolphins will turn their attention to a much superior Baltimore Ravens squad Thursday night.

Playing on a short week, Miami will also rely on veteran quarterback Jacoby Brissett to start over youngster Tua Tagovailoa.

Tagovailoa missed last Sunday’s win over Jacksonville with a fracture in the middle finger of his throwing hand. Given that the Fins are playing on a short week, it stood to reason that the 2020 top-five pick would not be able to suit up.

The Dolphins snapped their seven-game losing streak against Jacksonville in a game that saw the two teams combine for a whopping nine turnovers. For his part, Brissett completed 26-of-43 passes for 244 yards with a touchdown and three turnovers. He was also sacked four times.

Tua Tagovailoa running out of lives with the Miami Dolphins?

Immediately ahead of last week’s NFL trade deadline, rumors came up that Miami was nearing a deal for Houston Texans quarterback Deshaun Watson. Nothing ended up coming to fruition on that end.

However, it does speak to how Miami’s brass feels about Tua less than two calendar years after selecting him No. 5 overall in the 2020 NFL Draft.

As you can see, those numbers simply aren’t going to cut it. Miami is pretty much playing out the string in what has been a lost season in South Beach. Unfortunately, general manager Chris Grier and Co. have not been able to get a feel for what Tua might be able to bring to the table moving forward.

It’s obviously a major backdrop as the Fins enter their Week 10 outing against Lamar Jackson and Baltimore as major home underdogs.