Medina Spirit remained the favorite Saturday to win the Preakness Stakes in the second leg of the Triple Crown.

Medina Spirit is being offered at 9/5 by TwinSpires, ahead of Concert Tour (5/2), the other entry from embattled trainer Bob Baffert.

Two weeks ago, Medina Spirit won the Kentucky Derby but tested positive for the steroid betamethasone in postrace testing. He will start Saturday from the No. 3 post position under John Velazquez for the 1 3/16-mile race.

Concert Tour will start on the outside in a field of 10 3-year-olds with jockey Mike Smith. After winning his first three races, the son of Street Sense finished third in the Grade 1 Arkansas Derby at Oaklawn last time out.

Both Medina Spirit and Concert Tour were cleared to race on Friday after passing drug tests.

The Preakness Stakes is the 13th race at Pimlico Race Course on Saturday.

Midnight Bourbon, who finished sixth in the Kentucky Derby, will break from Post No. 5 with rider Irad Ortiz Jr. at 5/1. Hall of Fame trainer Steve Asmussen previously won the Preakness twice, with Curlin in 2007 and filly Rachel Alexandra in 2009.

“Concert Tour is as fast as you can be,” Asmussen said. “He’s obviously a very formidable horse. What will be very interesting is how the racetrack plays all week and what we would like to do in the Preakness.”

Crowded Trade is coming off a third-place finish in the Grade 2 Wood Memorial at Aqueduct Racetrack on April 3. Risk Taking, the 5/2 favorite in the Wood, was seventh in the nine-horse field.

“Crowded Trade ran a really good race in only his third start,” Brown said. “He did hang a little bit in the lane, but he made up a lot of ground after breaking bad. Risk Taking was quite a disappointment that day. He was coming into the race in excellent form and his numbers were heading the right way. He just didn’t fire.” 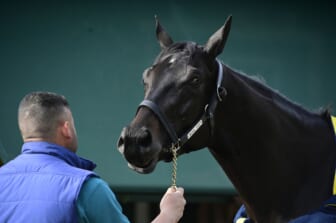 Trainer Todd Pletcher, recently named among this year’s class to The National Museum of Racing and Hall of Fame, will start 15/1 Unbridled Honor with jockey Luis Saez breaking from Post No. 8.

France Go de Ina, a Kentucky-bred son of Will Take Charge, will go to Post No. 7 at 20/1 under Joel Rosario. The colt has two wins from four starts, all on dirt in Japan.

“He had no wear and tear, came out in excellent shape and moved right ahead,” Barnes said. “Couldn’t be better. He came out of the Derby in fine shape. He wasn’t a tired horse, rebounded quickly.”