Medina Spirit has been cleared to run in Saturday’s Preakness Stakes after passing three rounds of drug tests, the racing entity said Friday.

Medina Spirit won the May 1 Kentucky Derby but tested positive for the steroid betamethasone in post-race testing.

Trainer Bob Baffert initially disputed claims Medina Spirit tested positive for betamethasone. He later acknowledged the horse had been treated with an ointment containing the drug in the week leading up to the Derby.

Preakness officials said samples drawn from Medina Spirit on May 6 and 10 were screened by Industrial Laboratories in Colorado and a third sample draw on May 11 was screened by Maddy Laboratory at UC Davis.

“The additional tests and monitoring were conducted as part of the rigorous condition of entry agreement to ensure the fairness and integrity of the races with horses entered by Baffert,” Preakness officials said.

Another horse trained by Baffert, Concert Tour, also was cleared to race at Pimlico Race Course in Baltimore. 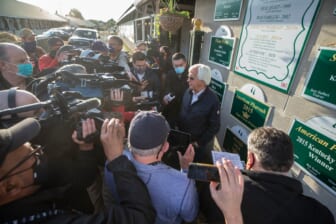 Baffert, who is not in Baltimore, consented to the rigorous rounds of testing.

Medina Spirit is the 9-5 morning line favorite of the 1 3/16-mile race and second jewel in the Triple Crown.

“He had no wear and tear, came out in excellent shape and moved right ahead,” Barnes said. “Couldn’t be better. He came out of the Derby in fine shape. He wasn’t a tired horse, rebounded quickly.”