Sportsnaut
Bob Baffert spoke with the media in front of his barn on the backside of Churchill Downs the day after his seventh victory in the Kentucky Derby with Medina Spirit. May 2, 2021 Aj4t9290

A group of bettors filed a class-action lawsuit accusing Hall of Fame member Bob Baffert of racketeering and requesting he no longer be able to train horses in the wake of doping allegations following the Kentucky Derby.

The suit was filed Thursday in California, where Baffert, 68, is based. It names Baffert, his stable and the stable of horse owner Amr Zedan as defendants.

Zedan owns Medina Spirit, who won the Kentucky Derby on May 1 but later was found to have more than twice the state-allowed amount of betamethasone in his system after the race. In a prepared statement issued Tuesday, Baffert said Medina Spirit had been treated daily with Otomax, an antifungal ointment that he said he later learned includes betamethasone, a steroid.

The case was brought by four men who said they bet between $5 and $2,000 on the race and would have won between a minimum of $100 and $40,000 each “but for the illegal entrance of Medina Spirit into the race,” according to the lawsuit.

They are seeking, on behalf of themselves and other members of their class, the amount of money their bets should have paid, punitive damages and for the court to order Baffert’s banishment from thoroughbred racing-related activities. 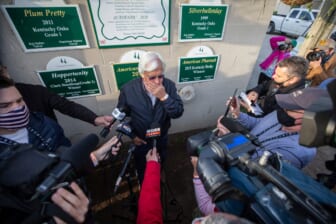 The document lays out what the plaintiffs call a “pattern of racketeering acts” and details incidents over several years in which Baffert-trained horses were administered illegal substances.

The plaintiffs are asking for a jury trial.

One of the plaintiffs, Justin Wunderler of New Jersey, spent about $2,000 on bets and would have won at least $40,000 had Medina Spirit not been in the race, he said. He told the Courier Journal the case was a “longshot” and said he would continue to take up the matter with racetracks and racing commissions.

“If we’re not fighting for the bettors, it’s just going to keep on going,” Wunderler said. “Without the bettors, there is no sport of horse racing.”